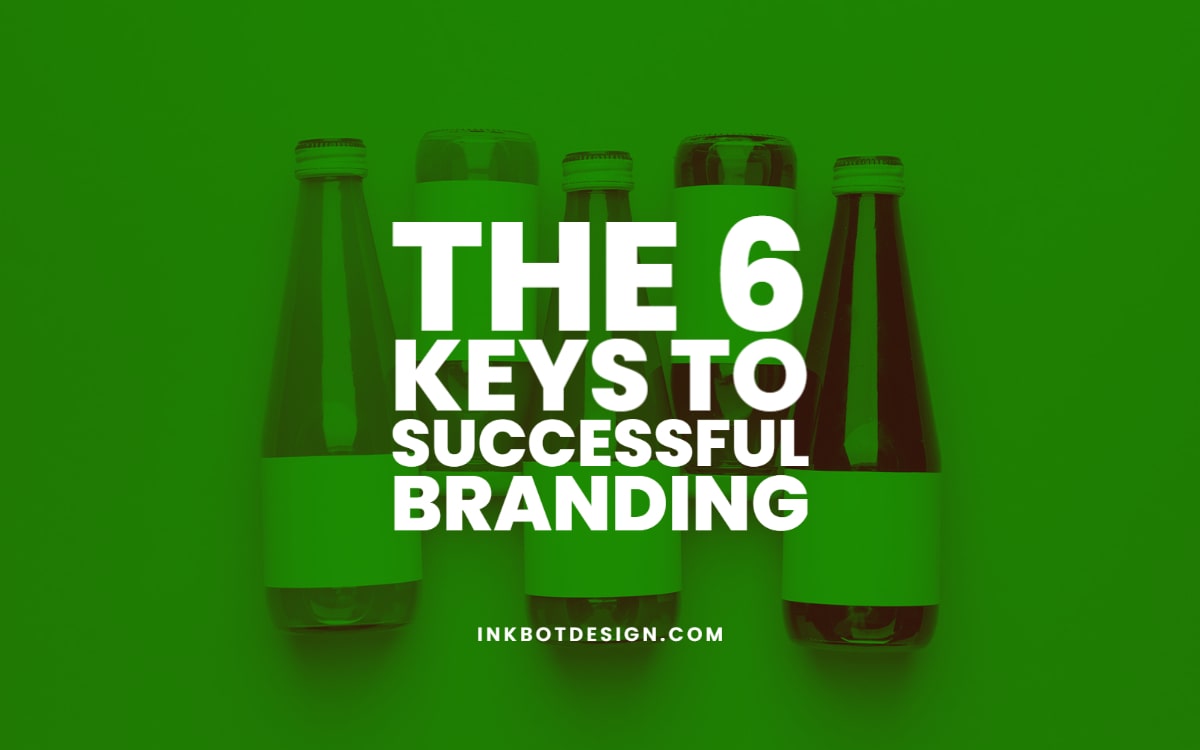 The 6 Keys to Successful Branding

A brand is no longer what we tell consumers it is – it is what consumers tell each other it is.

Scott Cook perfectly summed up the evolution of branding and its interactive nature.

Companies cannot merely come up with a successful branding concept and blindly stick to it without taking into consideration external factors such as customers’ associations, beliefs, and emotions, as well as competitors’ efforts.

The point of this complicated process is to find your way into your audience’s hearts and minds and to distinguish your brand from your competition.

Building a successful brand is an undertaking that encompasses many different tasks that have to be completed and elements that have to click.

It is true that no precise recipe will magically turn your business into a brand, but this is not necessarily a bad thing, mainly because you will be able to unleash your creativity and create a name that will grow and evolve together with the size of your consumer base.

What will I learn? show
1 – Identify your audience and their emotions
2 – Loyalty is the key
3 – Know your competitors
4 – Be consistent
5 – Successful Branding happens Internally too
6 – Create a striking visual brand identity

1 – Identify your audience and their emotions

Although this is a crucial step towards building successful branding, many companies fail to pay attention to it and adequately analyse their target audience.

This usually results in mismatched branding efforts and a failure to offer and deliver unique value to your audience.

You need to know to whom you will be pitching and whose problems your brands will be solving, because of being aware of your potential customer’s pain points and offering them a product that will help them.

Remember that your competitors also have similar products, so besides trying to help your customers, you also need to persuade them that your product is better than the others in the marketplace.

To do so, it is essential to use the right pitch, address your audience in their language, and tell them a story that they can relate to.

However, how are you going to get them to listen to your story and realise that you are what they need and want?

A catchy tagline, crafted in a manner that will attract your audience’s attention is the first and most crucial step.

It will resonate with your audience and communicate your brand message in a memorable, meaningful, and likeable way.

Simplicity is the final and essential ingredient of a perfect tagline, which is why the golden standard for composing it is using three to four words (give or take).

Just Do It, I’m Lovin’ It, Designed for Driving Pleasure, or America Runs on Dunkin, are examples of witty and yet extremely clever taglines that condensed the essence of Nike, McDonald’s, BMW, and Dunkin’ Donuts respectively into a couple of words.

However, MasterCard’s two sentences long “There are some things that money cannot buy. For everything else, there’s MasterCard” shows us that rules exist to be broken.

This slogan elicited powerful emotions and paired with an equally memorable commercial in which a father takes his son to a baseball game, is precisely the stuff that people will buy (pun intended).

It is your task to identify and tap into the right emotions that are likely to move your audience.

Take a page from Apple’s book, as the brand boasts a vast army of fanboys and fangirls who not only wait in lines in front of Apple stores day and night when a new product is launched but who will also religiously promote and defend the brand both in the online and the offline world.

What’s the secret behind such a brand loyalty phenomenon?

The emotional value that Apple offers make its audience believe that they will become better versions of themselves if they buy a product.

Another equally important strategy is to connect with your audience, listen to what they have to say, build rapport, and engage in meaningful and direct conversations with them.

A personalised thank you note will strike the right chord and show that you value their loyalty.

Freebies and swag are also indispensable tools for your loyalty-building efforts, not only because people love free stuff, but because they will be obliged to buy from you when the psychological principle of reciprocity kicks in right after you give them one of your fresh branded items as a gift.

Again, this is not a particular nugget of wisdom that unearths something previously unknown that can transform the world of successful branding, but common knowledge.

Many companies do not take advantage of this sneaky tactic to its fullest extent, thus missing out on outdoing their competitors.

Are we talking about spying here? By all means!

Observing what your fierce competition is doing on social media, how they are engaging with their customers, how they are advertising their brand, or how they are highlighting their unique values will help you gain a competitive advantage.

Not to mention that they and your audience overlap, so it is a good chance that you can manage to steal some of their customers.

When it comes to sports, there’s one particularly cut-throat competition that has been on for decades – Nike and Adidas.

The German giant famously decided to move its head of design from Herzogenaurach in Bavaria, across the pond to Portland, Oregon in 2014.

The brand, apparently, believes that it is essential to keep your friends close and enemies closer, as this location is practically a stone’s throw from Nike’s headquarters.

Although the Cola Wars, a series of commercials and ads initiated by Coca-Cola and Pepsi during the 1980s, signify the period during which the competition between these sugary-drinks behemoths took a bitter turn, the two companies have been trying to outsell each other ever since their early days.

For example, during the Great Depression of the 1930s, Pepsi decided to switch to bigger bottles sold at the same price in an attempt to woo consumers and show them that they care.

Consistency is a crucial element of your successful branding.

That is how your target audience can recognise your brand and understand that they will always get the same product or service that they like.

Living up to your brand promise and providing your customers with what they are accustomed to getting should be at the core of your branding efforts.

That is the way to build trust and loyalty and amass a steady following.

It is important to emphasise that both the quality of your products, as well as their visual and narrative elements should be consistent.

However, it is worth noting that flexibility is a desirable quality, which means that brands that can hold on to their original, true identity, and yet modernise it and adjust to their customers’ needs managed to dominate their industry.

Let’s take Levi’s as an example.

The company started by providing sturdy, built-to-last dungarees to miners who came to California in search of gold and a better life.

Levi’s used to be a working-class brand, and over the decades, it morphed into the apparel appealing to rebellious young people, and finally settled into the mainstream culture.

However, all these changes were regarding modernising their design, while Levi’s jeans retained their core values – quality, authenticity, and the promise of a better future, which are the ones that made the company famous.

Its “Go Forth” campaign launched in the wake of Hurricane Katrina which was one of the most catastrophic natural disasters in the history of the U.S., invoked the words of Walt Whitman and his concept of “New Americans” thus offering some hope to the people and getting back to its pioneering roots.

On the other hand, the infamous New Coke fiasco in 1985 showed that shocking innovations could be a bad thing, as Coca-Cola lost a portion of its market share, as well as an undisclosed amount of money.

When they hear the word “branding” most people are inclined to think about so-called external branding, which is the aspect of the strategy that is directed at consumers with the idea of influencing their opinions and purchasing behaviour.

However, internal branding is equally important, because we live in a world where word-of-mouth marketing has gained considerable momentum with the help of social media, and your employees are (or should be) your best brand ambassadors.

By involving them in the promotion of your brand, the brand consistency mentioned above will be possible, as all your successful branding efforts will not come to fruition if your employees do not believe in and don’t live your brand.

Their communication with your customers should be aligned with your brand’s culture and values.

Nike mastered this skill, and their legendary story about its co-founder Bill Bowerman, who used his family’s waffle iron and poured rubber in it in an attempt to build a better shoe.

Thus creating the brand’s iconic Waffle Sole design, is an excellent example, because this man is more relevant to the identity of Nike in the eyes of the company’s employees than any other contemporary sports figure with a vast endorsement deal.

Apart from attracting your audience with all these inner qualities and values of your brand, you need to give them some eye candy too.

Selecting your logo design, brand colours, fonts, and setting the tone of your communication all stem from the first step – identifying your audience.

After you have done your homework and established whom you are talking to, it is time to come up with a visual symbol that will best represent your brand and embody its primary qualities, values, and identity.

A rule similar to that referring to creating a company logo design also applies here.

The simplicity and clean, sleek design will make your brand memorable and recognisable.

Amazon uses an entirely minimalistic and yet smart company logo design which consists only of the name of the brand and a small, orange arrow pointing from the letter A to the letter Z, thus subtly letting the customers know that the company sells virtually everything.

There are all kinds of ways to approach your successful branding, but no matter what angle you take, these six steps are a must for getting under your customers’ skin.