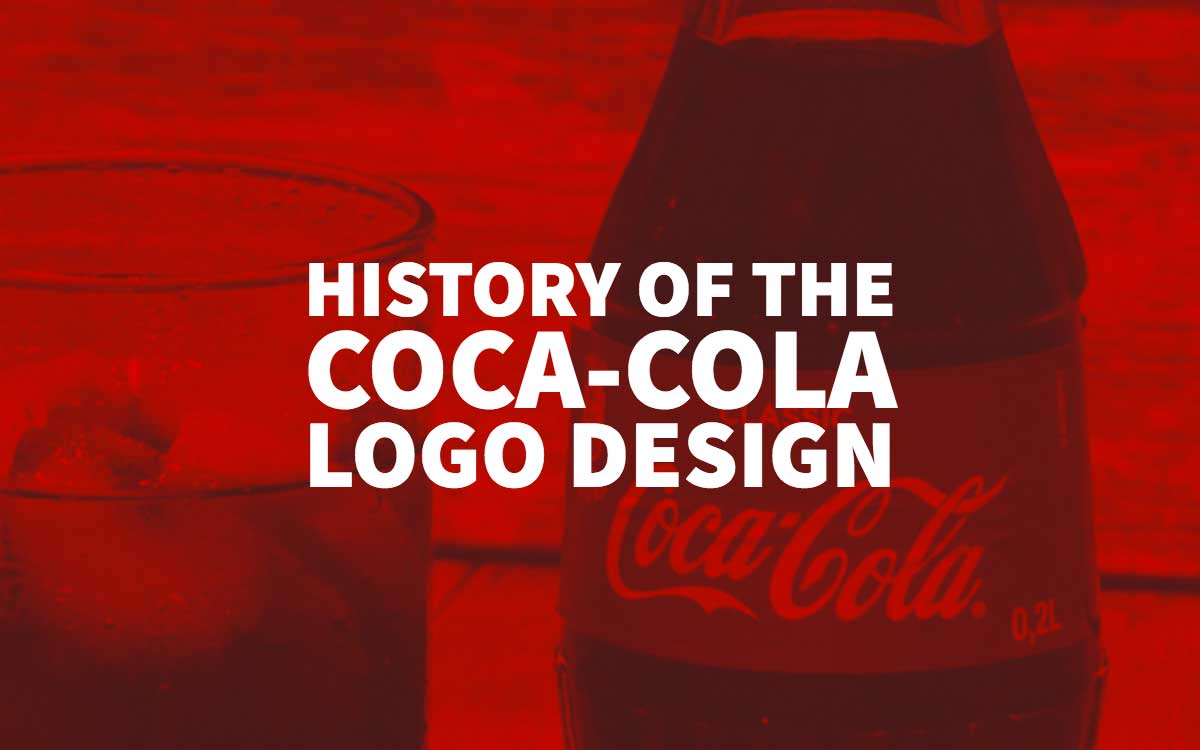 The history of the Coca-Cola logo design began in 1886 in New York Harbor with John Stith Pemberton.

John Pemberton — John Stith Pemberton was an American pharmacist who is best known as the founder and originator of Coca-Cola.

Everything he prepared failed in pharmacies.

For instance, He developed many drugs, but none of them ever made a penny.

So, after travelling to Atlanta, Pemberton decided to try his influence in the beverage market.

The good thing was, he did not give up!

He again tried something diverse through numerous experiments finished within the years.

Lastly, he achieved a taste that was unique in the form of a carbonated flavour drink.

From blending to mixing, everything he tried to originate one product through several different products of nature to capture the right taste.

By the time — the bicycles manufactured for TWO, the drugstore was the counterpart of the conclusions and the sprinkling places of majestic days.

The soda cascade ghastly became a traditional feature of American life with the pleasure of everyday sociability for all desirous regression.

People started to talk about it, tried it, and way back then appreciated how uplifting the pause that revitalises them and how good it was to enjoy a drink in such good taste.

The new drink became a favourite all around the globe.

In those years of refreshment and revolution — a friend called another friend just to ask “hey, fella if you are free then join me for a coca-cola as I am quite depressed.”

So, they used to drink this carbonated magic when they got depressed or upset over something.

You may also like:   How to Add Humour and Comedy to Your Brand

Karal Annal Marling — a pop culture historian — said, “He was a man who knows the values of living and got stick to the plantation, he was an amazing money maker.”

He tried to make many things like hair dyes, medicines, and other items but failed.

Now, he is known as an icon of this money-making brand.

When the customers were satisfied with this new drink, Jacob’s pharmacy put it on sale for five cents, which was about €0.04 per glass.

Pemberton’s partner, Frank Robinson, named the mixture “Coca-Cola” and wrote it out in his idiosyncratic script, which is now a favourite drink of the majority.

In the primary and initial year, John sold only nine glasses of Coca-Cola a day.

It is stated that in between the years 1888-1891, Atlanta businessperson Asa Griggs Candler secured rights to the business for a whole of about $2,300, which was about $56,000 today.

In accumulation to the tokens, Candler also decided to feast the word of Coca-Cola by surfacing logos on datebooks, artworks, notepads, and bookmarks to reach consumers on a broad branding phase.

It was one-step in manufacturing Coca-Cola a national brand identity, instead of calling it a local brand.

Candler became Coca-Cola’s first president and the first actual image, who started the business with this drink and turned it into a Brand Name.

After the year of fulfilment, the desiring requirement of natural assets and the making of the delicious drink.

You may also like:   10 Reasons Why You Shouldn’t Design a Logo Yourself

John decided to build a proper Coca-Cola logo design that backs up the brand name.

Once again, Pemberton returned to his secret weapon, known as a trusted person, Frank Robinson, as he was familiar with the term of typography.

At last, Frank’s excellent penmanship skills rewarded off in the form of the Coca-Cola script logo design.

Those who are expert in this field of logo design can easily notice or confront that there is a lacking of a “registration symbol” in this logo design.

We know that it is wholly unofficial to not having a registration symbol.

Of course, by this point, numerous reiterations of the logo occurred in their unpolished forms.

Many artists said, “Lacking in the usage of modern tools ended up recreating the logo.”

As the Coca-Cola logo discussed above had a rough look and required the changes.

In 1891, Trade card reversed the logo and showed up the details in a finely detailed version of the first logo.

In 1892, a coca-cola logo took a reverse gear and adjusted the variation with diamonds and typefaces.

By that date, it remained unpolished and required the changes, variations, and alterations.

In 1893, Coca-Cola granted its very first and primary trademark from the patent office, which made it official.

After being official, the logo of the carbonated drink took a bit change and appeared with the words TRADEMARK beneath.

In 1903, after the official registration, the words TRADEMARK REGISTERED began to appear within the design of the logo in pouncing tail of the capital letter “C.”

This happened under the new law that required corporations to re-register their trademarks.

In the middle of the year 1920, the word DRINK also appeared in the logo design above the word COCA-COLA.

In 1941, the trademark notified that the addition of REG. U.S. PAT. OFF. is mandatory.

You may also like:   10 Mistakes Logo Designers Should Avoid

This time, a notification came up with the message that this time the given text should not be in the tail of capital letter C but in the centre of written word COCA-COLA.

At the beginning of the year 1950, the designers decided to look towards the Coca-Cola logo design and found out the complexity.

Took a turn and simplified it with the term Trade-mark ® and began to be used on some items.

In the era of 1950s, the placement of the logo inside a red, big, bomb circle, with a portrait of the new iconic bottle of coke at the back of it.

If any ancestors of you had a visit to any restaurant then makes sure to look at the old photos of those unwrapped souls to get the idea how it was!

You can visualise the posters on the walls and the roads!

If we go back to the more recent history, we would be able to see the desiccated change made in the design of the Coca-Cola logo.

Coca-Cola carried back the spherical logo with the bottle in it.

Though not used on the products — it became popular and a widespread motif for business and marketing promotion.

The only alteration from the older variety was the accumulation of “ALWAYS” in a curve overhead the logo.

In 2002, the era of vintage vibes enhanced the design by adding the ribbons, which provided the energy to the model.

However, it differed from country to country.

The innovative appearance highlighted the number of ribbons, breaking away from the company’s long-held observance to their red and white palette.

More Stark from 2007 to Present

You may also like:   How to Create a Great Corporate Identity: A Complete Guide

This time there is no slogan!

The absence of slogans and the bottle of coke helped the logo in establishing the brand itself.

The logo design twisted once again in 2009.

The final version of the Coca-Cola logo — 2009 to present

The final version of a logo design came out in 2009!

The company named as Coca-Cola opted for a more efficient approach to the official logo.

All catchphrases, emblems and supplementary illustrations have been shunned by courtesy of the script, ribbon and a modest ® trademark representation.

The evolution of the Coca-Cola logo design amazingly ended in 2009; hope to see versions that would be more creative in the future.

It is with the essence of branding which reflects the idea of being an image.

Undoubtedly, it is great to see how the story of this cola’s invention drove the century out and became the favourite brand of the majority.

At last, the syrup made by John Stith Pemberton left people in the excitement of carbonated water.

For marketing, the company used everything, from notebooks, through the art of women of prominence holding a glass of Coca-Cola, business calendars, posters on workstations.

Through high-quality photography with effective printing, they advertised the cola drink as the best beverage.

The cola became the national drink, claimed by the company in-house magazine.

The Atlanta History Center is situated a short drive from Buckhead and is well worth the visit!

Also, you can check out the animated video on YouTube in the form of a documentary.

3 thoughts on “History of the Coca-Cola Logo Design”