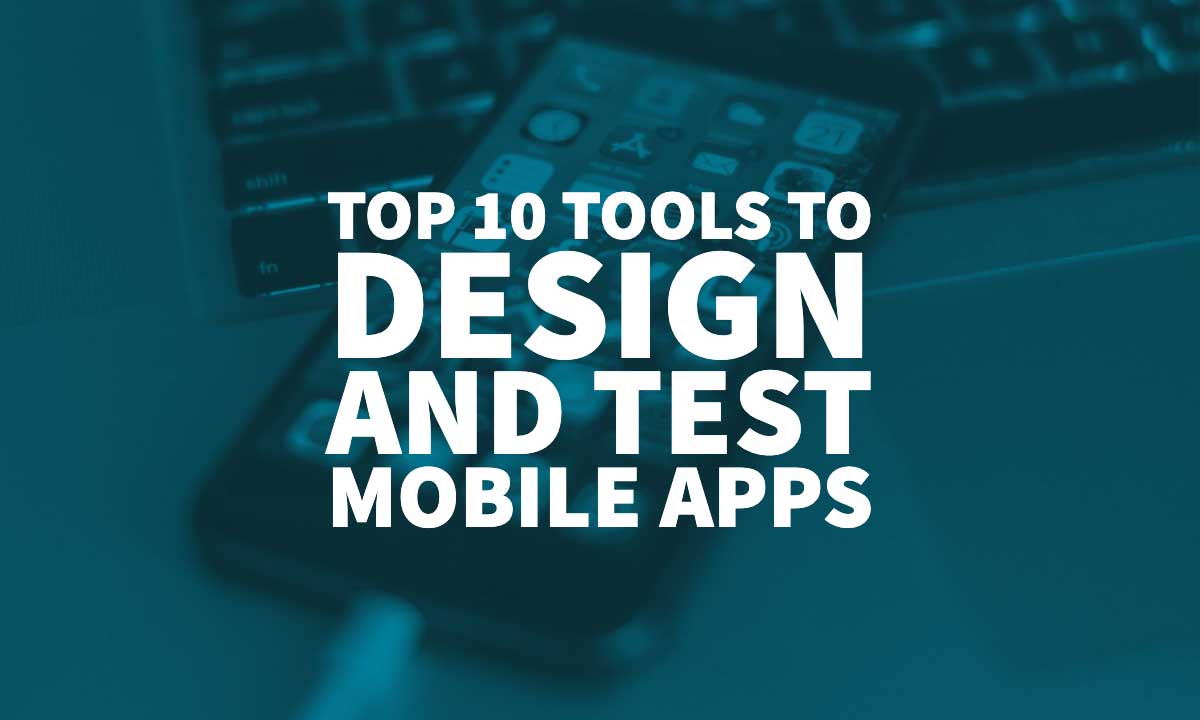 Are you looking to develop a mobile phone app? Or maybe you’ve developed one already and want to take it for a test drive?

Well, look no further because we’ve got you covered.

Here’s a download on some of the best tools available that will help you design and test mobile apps, significantly reducing the time and effort required otherwise.

It doesn’t matter if your app is based on an ingenious idea with top-notch functionality if you haven’t made it aesthetic and user-friendly.

Bad design will make even the most brilliant app look like a botched piece of child’s play.

It is essential to have the right tools to design your application so that it hits all the right spots with users.

Pro tip: never underestimate the power of a paper and pen; before you get down to using apps for designing, draw your thoughts out on paper and jot down your ideas. It will help you organise your efforts when you get down to the real work.

If you want to see your design on the big screen after you’re done – instead of squinting at a tiny Android screen – you can use Bluestacks.

Bluestacks is an Android emulator that works as a medium between Android devices and Windows or Mac systems.

It can be downloaded onto your computer system, and you can have the Android experience on your PC – only bigger and better.

These top 4 design tools will help you easily create a well-functioning app that users will love.

Sketch is a Macbook-based UI/UX tool developed by Bohemian Coding for app designers that have functions similar to Photoshop and Adobe Illustrator.

This vector-based design tool focuses on-screen design and works exceptionally well for headers, buttons, tabs, and symbols; however, if you want to edit photos, then you’ll have to use it in combination with some other tool such as Photoshop.

It’s used mainly for prototyping apps and has a swift wireframing process which saves much time – making it a favourite with big companies such as Google, Apple, Facebook, and Nintendo.

Sketch doesn’t use too many system resources and export assets very fast, making it an excellent choice for most app designers.

XD is the biggest rival of Sketch, with the added benefit that it isn’t just limited to Mac.

It provides all the necessary features that are available in Sketch and is extremely fast and easy to use.

Because it’s still in its initial phases of release, there are some kinks to work out, but it’s already showing promise of rising to the top.

It’s compatible with both Android and iOS, which is excellent because some tools are limited to one operating system, thus reducing the client base.

It also means that you can design apps for either system and download it to whichever device you prefer.

Unlike other design tools, Marvel is very specific about the features it offers – designing, prototyping, and collaborating.

It helps you link your design elements from different tools in one place, is easy to navigate and stay organised, and is ideal for users designing apps with multiple screens.

You can also bundle your elements from different tools together and then use Marvel’s animation features to give your app the bling it needs.

Marvel’s prototypes are compatible with both Apple and Android devices, so it’s a great choice if you’re designing an app for both systems.

This tool is great for beginners and those who aren’t that savvy with programming since it requires no coding.

The Lab Division of SNQ Digital developed it as the first mobile prototyping tool which supports full feature animations of the user interface such as drag-and-drop screens.

Its icon gallery contains thousands of options to use as buttons, lists, and tab bars, and it supports web fonts that allow users to use any online font they like.

Proto.io allows you to import and integrate UI components from other tools such as Sketch or Photoshop. The timeline feature creates animations to show the fluidity of your app across different screens.

Additionally, it’s a browser-based software which means that no heavy software is required to run it.

An application without having gone through rigorous testing is not considered reliable.

Users may encounter bugs, malfunctions, and slow performance, and this does not bode well for you as an app-maker.

So, apps must be put through a testing system that is easy to use, provides detailed analysis, and will help identify errors.

These six testing instruments will help you test the functionality, security, and consistency of your prototype to launch a highly efficient product.

Calabash is an open-source automated acceptance testing system that performs Automated Functional Testing for mobile applications and can be compared with Selenium Web Driver.

It works seamlessly with programming languages such as Java, .NET, and Ruby (2.0 or higher). It is supported by Xamarin (an open-source platform by Microsoft that helps build modern mobile apps for Android and iOS).

Calabash contains two open-source libraries – one for Android and the other for iOS, which enable the test code to interact with both native and hybrid apps.

This tool is also made easy to use by business specialists and non-qualified personnel by lieu of its Cucumber framework.

It gives APIs (application programming interfaces) which are specific to native applications and can run on touchscreen devices.

This is a cloud-based testing tool by Bitbar Technologies Limited which allows you to test your app on various types of genuine Android and iOS gadgets, with both mechanised and manual testing.

Testdroid is the favourite candidate for the speediest portable mobile testing instrument for Android and iOS gaming; it gives API through open-source programming. It runs its tests on more than 300 genuine Android gadgets before an app is released to the public.

It updates the number of active users and app ratings daily and supports access to phone sensor data (such as GPS and gyroscopes).

Appium is an open-source testing instrument for apps that are written in Android or iOS SDK, and works with different dialects such as Java, PHP, Ruby, and Python; it works with any web driver that goes with one of the programming languages to construct an experiment.

This tool is used for Automated Functional Testing of Android (renditions from 2.3 onwards) and iOS mobile and web apps (both native and hybrid), and the application code doesn’t need to be adjusted for testing as Appium is perfectly capable of continuing running on Android and iOS using the device or emulator.

This automated cross-platform testing tool supports Safari on iOS and all other built-in browser apps on Android. It is a favourite with developers as well as testers for the simplicity of its execution.

It uses standard robotisation APIs on all stages, so there is no need to change your application in any way.

This tool is for free Android UI testing (for all versions and subversions of Android) and works with both native and hybrid apps.

Robotium apps are written in JavaScript, and it’s straightforward to write compelling automatic black-box tests for Android apps with this instrument using the TestDroid Recorder.

It synchronises effortlessly with Ant and Maven to run tests and creates strong test cases in minimal time even with the least information about the task available.

It is also conceivable to run test cases on pre-installed apps with Robotium.

This tool is built over the Appium open-source framework and gives users complete access to genuine gadgets.

This cell phone cloud platform enables testers to run manual and mechanised tests on native, web, and hybrid Android and iOS applications, while continuously upgrading the gadget lab to the most modern equipment and OS updates.

It includes prepaid minutes of testing time that do not have an expiry and automatically generates commands, screenshots, activity logs and metadata which allow testers to identify issues with the app faster.

Kobiton can test across devices without having to upgrade its script continuously, and it provides a simplified client experience which helps streamline the tests.

MonkeyTalk is an open-source system that runs intelligent functional tests for Android and iOS applications.

Although it sounds like a product for technophiles, even a non-tech savvy individual can run tests on MonkeyTalk as it doesn’t require an in-depth knowledge of programming and its scripts are quite easy to comprehend.

MonkeyTalk allows testers to create XML and HTML reports, and it takes automated screenshots in case of failure. It can computerise “Smoke Tests” as well as info-driven test suites as intuitive tests for Android and iOS apps.