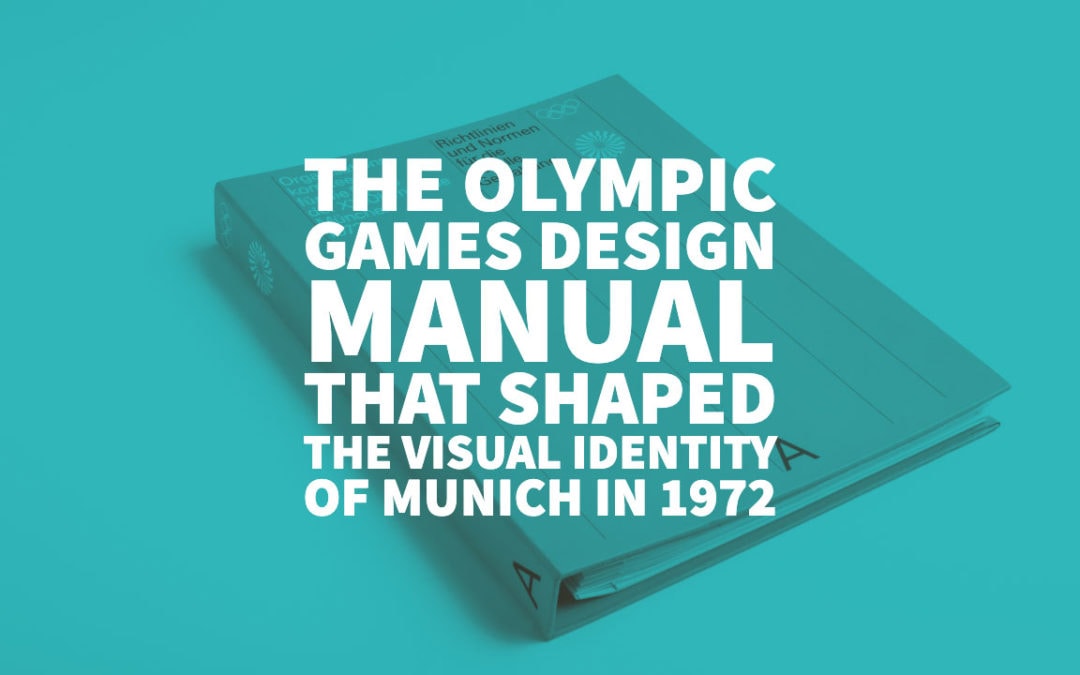 The Munich '72 “Guidelines and Standards for the Visual Design” encapsulate a defining moment in 20th-century graphic design history.

As the heart of one of the most memorable visual identities of the Games, they set new rules for branding and corporate identity and are still the primary source for similar events.

There are only a few copies of the iconic Munich '72 manual, but a reprint is now available on Kickstarter.

Hardly any other sporting event attracts such worldwide attention as the Olympic Games.

But not only the sport, the athletes, touching stories and various scandals are remembered.

It's the big picture – it's the “look of the Games” that gets stuck in people's heads.

At the end of the 1960s, the German Olympic Committee was confronted with more than just the organisation of a sporting event: it had to present the world the image of a new, modern Germany.

A quarter of a century after the Nazi dictatorship, design commissioner Otl Aicher (1922–1991), a pioneer of international rational design, created the set of rules that determined the look of the so-called Rainbow Games.

These “Guidelines and Standards for the Visual Design”, that will be published by Swiss Niggli Verlag, marked a turning point in design history, applying a design manual and causing a broad impact with surprisingly few design elements.

Since then design manuals have become an essential and indispensable part of the design process to create the look of the Games.

Today we get thrilled when we see that the graphics standards that determined one of the most successful visual identities of the Olympic Games are packed in a ring binder with only 22 foldout sheets.

It was a lucid visual grammar – the colours, the grids and the typeface – that gave all designers and partners involved in the preparation of the event the elements to guarantee a maximum of diversity while keeping an aesthetic unity.

The message of the 1972 Summer Games to the world was clearly defined: to shed new light on Germany, which differs from the Nazi era and the 1936 Olympic Games in Berlin.

It, therefore, required a specific visual language that, instead of pathos, heroism and ideology, suggested lightness, serenity, dynamism and openness – apolitical, playful, modern.

At the same time, the internationality of the Olympic Games required both a clear, uniform and universally understandable and appealing signage system.

It should ensure the best possible orientation in the Olympic city and all its facilities.

As Aicher was convinced that “trust cannot be gained through words, but instead only through visual proof”, the stringency of the visual expression seemed authoritative.

Thus, the picture served as the most critical information carrier before the word.

You may also like:   How to Create a Logo Portfolio that Sells

Furthermore, Aicher's scientific studies with colours at Ulm School of Design had influenced the development of a bright, unforgettable colour palette for the Munich Games.

Attracting the worldwide audience in all its diversity, and all this in a playfully informal and democratic way – the aesthetics of the 1972 Games proved to be a highly demanding mammoth task.

Internationally renowned German designer Otl Aicher was an influential figure in German and international design history on many levels.

As the son of a Catholic family, Aicher grew up in Ulm; he, his family and his close circle of acquaintances, including the Scholl siblings, were confessing critics of National Socialism.

Together with his wife Inge Scholl and the Swiss Max Bill, Aicher founded the Hochschule für Gestaltung Ulm in 1953.

After the Bauhaus, it was the world's most crucial design academy, headed by Otl Aicher himself for ten years.

Furthermore, he was also responsible for the corporate designs of major international companies such as Deutsche Lufthansa AG and Braun electronics manufacturer.

Overall, the identity of the Olympic Games in Munich and thus the image of modern Germany was the result of Aicher's principles to reduce ideology, language and aesthetics to the essentials, in the sense of Bauhaus.

A primary characteristic of the Olympic design was the flexible use, which fully developed in the playful application.

The visual modules – the typeface, the colours, the grid systems and the utilisation methods – were the basis of all printed matter, marketing products, signage, wayfinding systems, urban planning and landscaping.

“The freedom of play” was about ensuring “maximum variation” via “strict discipline and adherence to rules”, explained Otl Aicher in 1975.

Basically, the design manual comprises a rational set of rules that should enable to achieve “the widest possible impact of their appearance using the same design means” and “save the planner unnecessary preparatory work and time-consuming detailed decisions and thus give him more design freedom within a manageable scope”, as it is stated in the guidelines (1969) themselves.

Thus, the following design elements have been covered in the manual: the official emblem, emblems and coat of arms of the cities of Munich and Kiel (the latter being the venue of the sailing competitions), Olympic rings, paper formats, colours, typeface, type area, typographic system and the mascot.

Because of Aicher's remarkable scientific and mathematical approach to design, the symbiosis of the manual's layout in combination with the everyday, clear language leaves no questions or ambiguities about the use of any design elements open.

In general, colours are a decisive design element.

They determine the mood, the appearance, the overriding feeling that floats above all the Olympic Games.

Since the Munich Games stood for democracy and lightness, all colours associated with power and totalitarian systems were consistently banned from use.

You may also like:   The Top 10 Best Apps for Designers

Instead, Otl Aicher got his inspiration from the Bavarian nature, as he stated himself: “You would see the blue sky, light and bright, the white, floating cloud, the light green of the young meadows, and the silver lakes and rivers” (quoted in Günter Behnisch, “Vortrag über Otl Aicher”, 1998).

There are no coincidences in Otl Aicher's design.

What remained was a colour spectrum ranging from light blue, light green, orange, yellow and silver to the contrasting colours dark blue and dark green; all captured in the design manual in the most powerful yet straightforward way.

While their combination symbolises the colours of Bavaria, light blue alone represents both the Organising Committee and the Munich Games.

Just as the functions of the colours are assigned to all officials, participants and facilities, the colours in the book are structured and give unambiguous instructions on how to be used.

For 1972, a spiral-shaped wreath of rays was developed, which – in conjunction with the Olympic rings – was finally recognised as the official emblem of the Munich Games.

The emblem's construction, spacing, colour variations and combinations with lettering are explained in detail in the design manual: “The emblem has a double square as a base. The upper square includes the five Olympic rings, monochrome, with constant line thickness. The lower square contains the spiral of rays created for the Munich Games in 1972 in the same colour”.

In addition, both the Olympic rings and the spiral are clearly depicted with exact mathematical proportions and accompanying precise instructions of the dimensions, for instance as follows:

“The outer distances of adjacent rings (a) must be equal to the inner distances of interlocked rings (b)” and with regard to the spiral, it consists of “an outer circle, an inner circle and an Archimedean spiral, the radius of which increases by a constant amount for each 15° angle. The surface wedges tapering to the inner circle resulted from a complicated division of the outer circle into 35% sections”. Also,: “Likewise, the distances of the spiral of rays to the boundaries of the base […] are always 1/13 of the total width of the official emblem on the left, right, top and bottom.”

However, it is this playful product, an ironic element picking up the stereotype of the region that resembles everything necessary of Munich's corporate design: colours, emblem, and playfulness.

You may also like:   Is Emotional Storytelling the Future of Branding?

After consultation with Otl Aicher, the young designer Elena Winschermann was responsible for the realisation of the Munich mascot: a dachshund called Waldi, whose living example was the young rough-haired dachshund of Willi Daume, President of the Organising Committee.

Just like the colours and the emblem, Waldi was also subject to strict rules of the design department: the silhouette was binding, the head and tail always had to be light blue, the body in the other Olympic colours vertically striped.

Waldi was not allowed to be produced shorter than 12.5 centimetres so that the emblem, the spiral and five rings could always be seen on the chest.

His inventors hoped that the minimum size would also prevent him from losing his toy character and being misused as a kitschy mini-figure.

Several pages of the guidelines have been dedicated to the design of Waldi.

First, its identification is regulated, including the official name (“Olympia Waldi”), size and use of the emblem as well as that of the logo or lettering of the manufacturer.

Waldi's drawings and simple illustrations in the guidelines appear almost mechanical, not least thanks to the chequered paper that is mainly used in the natural sciences.

Moreover, just as in mathematics, the manual left nothing to chance: “Regardless of the type of three-dimensionality (round or square), the silhouette depicted is the primary and unchangeable distinguishing feature of Olympia Waldi. […]The following variations are possible: decomposability; movability of the head and ears; various positions of the tail.”

Of course, the colours in which Waldi was produced had to correspond to the colours mentioned above from the Olympic Games in Munich.

The manual impressively shows how even a banal soft toy was designed down to the last detail and prepared with strict, clear rules of application for the Olympic Games in Munich.

At the same time, as the other examples have already illustrated, it is exemplary for Otl Aicher's both mathematical and pictorial approach, which is highly complex but playfully easy.

Aicher managed in an unprecedented way to meet the spirit of the times and even beyond, giving the 1972 Games precisely this lightness, dynamism, and openness, which he set as his primary goal from the outset through rules and systems.

Moreover, recording this very well thought-out design on only 22 foldout sheets in the “Guidelines and Standards for the Visual Design” can be regarded as groundbreaking for all coming Olympic Games until today.