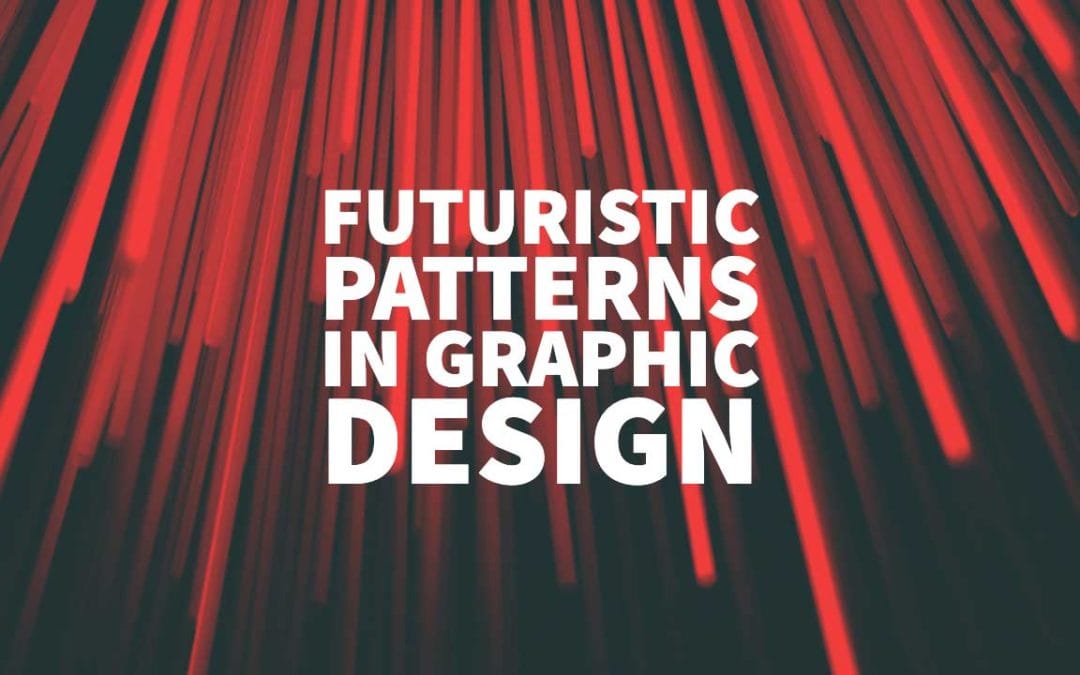 What will I learn? show
A Brief History and Evolution of Futurism
The Most Common Futuristic Patterns in Graphic Design
1. Bright colour palettes
2. Gradients and colour transitions
3. Abstract patterns
4. Glitches
5. Holographic and reflective elements
6. Geometric influences
The Pros and Cons of Futuristic Graphic Design
The Bottom Line

Graphic design has always been a colourful universe and a perfect environment for creative individuals willing to experiment with alternative thoughts and ideas.

The niche is packed with all sorts of styles and influences, but only a handful of genres are as impactful as futurism.

After all, is there anything more inspiring than thinking about the future and adding visionary elements to your graphic design products?

Futuristic patterns are not exactly a trend, but rather an industry standard for over a century.

What makes this style so exciting and popular among graphic designers?

We can’t give you a single answer to this question, but rather a set of explanations that can shed light on the whole concept.

In this article, we will talk about the futuristic patterns in graphic design.

A Brief History and Evolution of Futurism

If you want to know the purpose and the idea behind futurism in graphic design, you need to start from scratch and learn what the founders of this concept had in mind when they were launching a new trend in art and culture.

The poet Filippo Tommaso Marinetti is the founder of futurism who famously stated:

“We rebel against the supine admiration of old canvases, old statues, and old objects, and against the enthusiasm for all that is worm-eaten, dirty and corroded by time.”

Marinetti was a ferocious opponent of art traditions, but his ideas quickly reached the general public and found fertile soil in the minds of young artists of the early 20th century.

The Italian poet published his Futurist Manifesto in 1909, and the new trend spread like wildfire throughout Europe.

Of course, the basic principles of futurism had a much more significant effect, changing the mindset of entire generations of young painters, poets, directors, architects, and designers.

Futurist artists sought to create works that captured movement, or dynamism, as a way of interpreting the frantic motion of modern life.

The goal was to show the energy and dynamism of the new era, but also to combine it with modern visual elements and products of digital technologies.

Now, the real question is: How futurism influences graphic design?

To answer this question, we need to check out the major futuristic patterns in graphic design works.

The Most Common Futuristic Patterns in Graphic Design

The main idea behind futurism is to use what you think will be the next big thing in the high-tech universe.

If you don’t understand what we are talking about, try to remember a few scenes from “Terminator 2: Judgment Day” or “Back to the Future” movie series.

Shot in the late 1980s and early 1990s, these movies relied on new effects to show us their visions of the modern world.

While motion pictures are indeed different than static visual products, the comparison should be enough to help you grasp the essence of futuristic design.

But what’s going on with futurism here and now? What are the most popular and frequently used patterns in this field?

First of all, we need to highlight the importance of change.

If you want to embrace futuristic design concepts, you have to get rid of the old mindset.

Take a look at BBC Two, for instance, because they decided to rebrand for the first time in 20 years.

BBC Two wanted to build a notion of a modern and visually appealing brand, which is why they replaced the old two-colour image and designed a series of 16 highly colourful brand visuals.

According to broadcasting company, the BBC offers such a large, public platform for creative expression and exposure and the only way to prove it is by incorporating the new style into the branding strategy.

The BBC Two example is significant because it reveals almost every significant futuristic influence on graphic design.

Our job is to discuss each of these trends individually, so let’s take a look at the six most prominent patterns here:

The first pattern is rather evident as futuristic graphic design screams versatility.

Bright colour palettes dominate futurism because the idea is to show that the world is colourful and multifaceted.

Therefore, you should not be afraid of using multiple colours when crafting a futuristic graphic design product.

Jake Gardner, a graphic designer at Ghostwriter Preise, says futurism is not only about adding a bunch of colours to your visuals:

“On the contrary, it is also about the art of combination, gradients, and colour transitions.”

You don’t have to be a guru of futurism to understand that you are allowed to break barriers and use alternative forms and concepts.

This also means you can and should rely on abstract patterns to express your ideas.

It’s a common feature in the high-tech environment, which is why many authors add glitches and similar details to their graphic design works.

When you think about the future, you probably imagine touch screens, holograms, and transparent surfaces.

This is precisely why you are free to experiment with holographic and reflective elements – it can help you to grasp the essence of the modern world and make your design more compelling.

The last futuristic pattern on our list comes in the form of geometric shapes and influences.

Such a trend allows you to play with all kinds of shapes and object dimensions in the attempt to find the format that perfectly suits the nature of your product.

The Pros and Cons of Futuristic Graphic Design

A graphic designer should know when and why to use futuristic patterns because they come with both the pros and cons.

Here are the advantages of futurism in graphic design:

The first and by far, the most crucial benefit of using futuristic graphic design patterns is that they make your products look fresh and exciting.

With so many alternative colour schemes, formats, gradients, and other visual components, no one will stay immune to the futuristic style of work.

This benefit goes hand in hand with the first one.

Namely, graphic designers who are passionate about futurism can enjoy the privilege of experimentation.

It is clear that you will still have to follow common industry principles, but not nearly as much as your colleagues who opt for other, more traditional styles of work.

–       It helps you to distinguish from competitors

Another advantage of futurism is that it helps you to distinguish yourself and your products from the crowd of competitors.

Instead of looking dull and monotonous, you can stand out thanks to alternative visions and new graphic design elements.

The pros of futuristic patterns are very significant, but you must pay attention to the cons as well. Let’s take a look at the downsides here:

The biggest fear of every futurism-oriented graphic designer is that he/she may not be sending a clear message to the audience.

Unlike painters and other artists, graphic designers cannot afford to create incomprehensible products.

Given the fact that futurism relies heavily on alternative visual elements, sometimes it will be challenging to balance between clarity and abstract messages.

Another thing you should keep in mind is that futuristic design patterns do not have to suit every brand or client out there.

Some businesses could even chase the audience away if they stick to futuristic design exclusively.

For this reason, your job is to assess the needs and the preferences of your clients to make sure that they can benefit from futuristic patterns.

Sometimes you might feel tempted to jump the futurism bandwagon, but do you think it would be the right decision for you, your business, or your clients?

Think about it before crafting a product based on futuristic elements.

The reason is relatively simple – if you do it merely because it’s a new trend, rest assured the direction will soon become obsolete, and you will probably have to do the whole work all over again.

Futurism is far from being a novelty in the graphic design universe, but it remains one of the most critical industry trends with many supporters worldwide.

It seems like graphic designers enjoy adding revolutionary elements to their products because they can experiment with all sorts of alternative ideas, techniques, and points of view.

In this article, we discussed the futuristic patterns in graphic design. You could learn the following:

– A brief history and evolution of futurism

– The most common futuristic patterns in graphic design

– The pros and cons of futuristic design

Which pattern do you appreciate the most?

Share your thoughts and ideas in the comment section – we would love to see what you think about the influences of futurism in graphic design!

Author Bio: Dorothea Oppelland is a marketing specialist, a business consultant who currently works at Studhilfe. She helps people to turn their dreams into a profitable business. Dorothea studied Marketing at Hamburg University.