10 Principles of Psychology to Improve Your Web Design 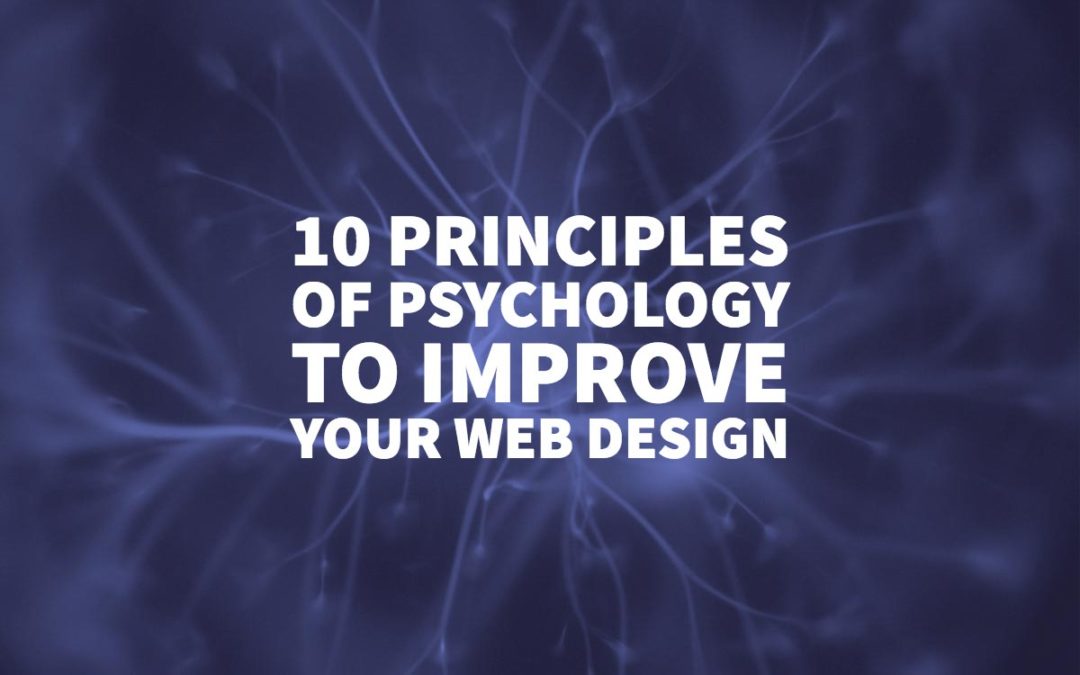 Design for marketing is most effective when coupled with the power and principles of psychology.

Understanding how people react to graphics will help guide your design efforts.

If you don't factor in psychology, you're just gambling and hoping that your graphics appeal to people.

While psychology is a complex and dynamic field, it doesn't mean you need a PhD to leverage it when designing.

Some psychological concepts are simple enough to be used without understanding the theories behind them.

There are many principles of psychology that you could use to improve your web design.

Let's have a look at ten that can help with the appeal, usability, and comprehension of your designs.

The reactions then influence your behaviour on a subconscious level — meaning you don't even notice that these emotional reactions are influencing your decisions or behaviour.

Most people think — or like to believe — that they are in complete control of their behaviour and decisions.

Unfortunately, this couldn't be farther from the truth.

Your brain may want you to think that all your decisions are the result of analysis but in reality, most things you do are influenced by your hardwired survival instincts.

These so-called visceral reactions are triggered when you're exposed to things like food, danger, reproduction, or shelter.

They come from your central nervous system and reach your brain far faster than conscious thought does.

These visceral reactions influence your every thought, action, and decision on a subconscious level.

Have you ever seen a painting that you liked but no matter how hard you tried you couldn't put into words exactly what you liked about it?

If you have, it was likely a visceral reaction that led you to like that painting rather than your conscious mind.

Visceral reactions draw from genetic memory making them very similar across all genders, demographics, and cultures.

This can help your designs appeal to a broader audience instead of being appreciated in a more tightly defined niche.

Some elements that trigger a visceral reaction could be things like using a shade of blue akin to fresh water or bright colours that remind you of a specific fruit.

Using a clean design can also trigger the feeling of being in a safe environment.

The cost-benefit principle is a concept similar to visceral reactions.

Most psychologists agree that basic human behaviour can be summarised in two patterns: threat avoidance and opportunity seeking.

For instance, your brain is genetically programmed to look for food that gives the most energy.

This is why you're tempted to eat calorie-rich foods like chocolate or pizza when going on a diet.

It is also the reason that water and cabbage aren't all that appetising when you're hungry.

During prehistoric times, food was scarce, and the search for food was crucial to surviving long enough to reproduce — which is in the best interest of our species.

It is because of this prehistoric emphasis on food and energy that we humans subconsciously avoid tiring ourselves out and even go so far as to eat more calories than we need.

Early humans didn't have the luxury of being able to buy a bag of chips at a 7-Eleven.

That's why they would conserve their energy and only perform a task if they deemed it beneficial.

While times have changed, our psychology has not, and modern humans still display the same behaviour to this day.

Our brain is always weighing the costs and benefits to any given task on a subconscious level.

This also translates to online behaviour.

If a task seems difficult, users won't complete it unless the promised reward is valuable enough to them.

As such, actionable logos that demonstrate the value or purpose of the site, service or product are generally more effective.

One of the most common examples of this principle in action is form fatigue.

Filling out forms online uses up much energy.

Most users will not complete the form unless something of value is offered in exchange for filling out the form.

If your website uses up too much energy, users are likely going to go to another site that offers the same information but delivers it more effortlessly.

Mental activity can be just as energy taxing.

The simpler your website looks, the higher the odds of a user staying on it.

Hick's law states that the more options a person has, the longer it'll take them to make a decision.

While most people say that they prefer more options, their behaviour suggests quite the opposite.

Some case studies have even shown that if there are too many options, people will not decide at all because the task is deemed too time-consuming.

Hick's law is directly related to the cost-benefit principles of psychology.

Online, this law teaches that you should praise simplicity.

Whether its images or navigation tabs, the more there are, the less likely they'll be interacted with.

The best way to utilise this law is decluttering your homepage and removing all non-essential images, elements, and links.

Simplicity will also reduce the chances of overwhelming someone and make it easier for them to process the available information then retain it in their long-term memory.

In the 1920s, a group of German psychologists found that the human brain will assume that two unrelated elements are related if they are close to one another.

Similarity can also influence whether or not our brain deems two elements related to each other.

When designing, you must carefully control the proximity and similarity of different aspects to ensure that only related items are psychologically paired. 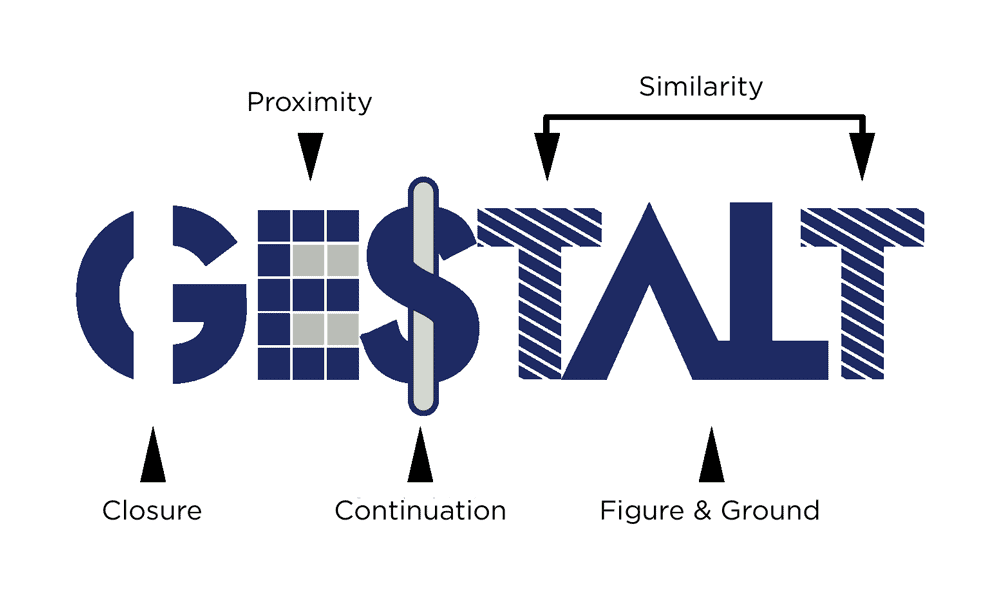 Pattern recognition lies at the base of visual perception as the principles of psychology.

Whether it's a face, word, or object, the only way we can comprehend complex visual stimuli is by looking for familiar patterns.

When you recognise a pattern similar to something you've seen in the past, your brain also recalls cognitive associations that you have with it.

The more you see something, the more familiar it feels because it's easier for your brain to match the pattern.

On the flipside, visuals that are hard to match, feel more foreign to your mind.

Uncommon visuals can be a way to shock people and grab their attention.

Facial recognition is one of the most critical pattern-matching processes that goes on in our brains.

Humans are social creatures, and for millennia, we would interact face-to-face.

As such, it's imperative that we can recognise people and tell one person apart from another.

Another reason that facial recognition was so historically significant was to assess the intentions of a stranger.

Sure, anyone can fake a smile, but their micro-expressions reveal their real emotions.

If it's fear or panic, they may be planning to attack you.

In this way, facial recognition is essential to survival. 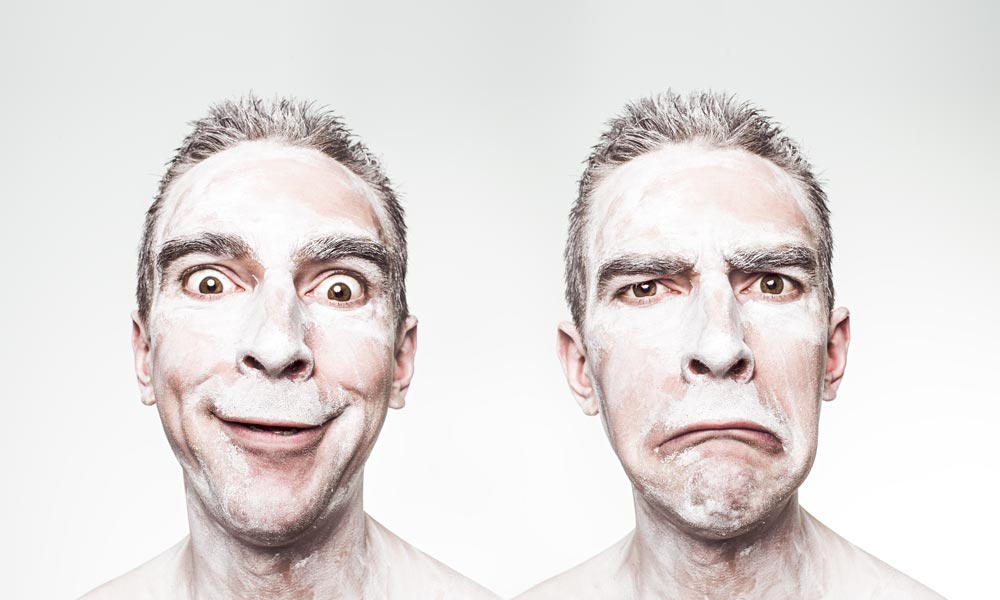 It helps us identify humans and determine whether they are friendly or hostile toward us.

Facial recognition also carries over to online behaviour in the principles of psychology in web design.

Seeing a picture of someone smiling will make the viewer feel welcomed whereas a picture of sad children without food will trigger a feeling of desperation.

Take photos of real people when you can instead of going for stock images.

The feelings of the viewer will be similar to that of the people in your photographs which is why you should always avoid taking pictures of self-conscious people as viewers will quickly pick up on this.

While survival is no longer the sole priority, our brain still values the opinions of others.

The best way to influence this is by doing quality work that receives excellent feedback.

Always remember the liked-likely-like rule — people who see something liked by others are more likely to like it as well.

While you might think that your mind processes everything that happens around you, that isn't the case.

This is due to a concept called selective disregard.

Our brain isn't powerful enough to process everything we see, so it ignores the elements that it deems insignificant.

The most common example of selective disregard is banner blindness.

Internet users have learned to ignore online advertising on a subconscious level.

This doesn't just apply to advertising principles of psychology though.

Your brain will ignore anything that seems irrelevant to your current task. It is because of this that all essential elements should look relevant and be very visible.

Another variation of selective disregard is change blindness.

Change blindness happens when your brain disregards certain elements and, as a result, misses obvious changes.

Our brain will always do everything it can to save energy.

The best way to do this is to assume everything has stayed the same unless told otherwise — like a web browser showing a cached version of a website to save time.

Be sure to make any changes pronounced to ensure that it doesn't go over people's heads.

It takes a lot of focus, energy, and effort to take in new information, process it consciously, then move it to your amygdala for long-term storage.

Relax, you don't have to understand learning theory to leverage this tip, all you have to do is realise that people would instead recognise existing information rather than learn new information.

Whenever someone tries to learn something, there'll be a certain point where he or she cannot take in further information without first storing the data that he or she absorbed earlier on.

It is due to this that most people will start skimming articles if you overwhelm them with too much information.

You don't have to cut down on the amount of information on your site, but what you must do is give people information in small doses.

This is referred to as progressive disclosure.

It's like feeding someone food in smaller portions to help them swallow it instead of choking on it.

This will keep users from being overwhelmed and help them retain the information that they've learned.

If you want to write a master guide, don't publish one 10,000-word article, instead, break it down into 10-20 parts that are easier for users to take in and digest.

This is why you'll see many guides in series form instead of in individual, more extended pieces.

Dual-coding theory was first published in the year of 1986 for the principles of psychology.

The theory analyses the relationship between memory and learning through both non-verbal and verbal mediums.

The theory suggests that there are two cognitive systems in place — one for processing images and another for perceiving verbal stimuli such as spoken language.

Designers have long posed the question of whether or not visuals are more comfortable to process when coupled with text.

Most studies suggest that people find it easier to learn and remember things when given both types of stimuli — image-based and verbal.

Most people process image-based stimuli faster than verbal ones.

People are more likely to retain information when you combine both image-based and verbal forms of communication, that's why more people should supplement their content with videos, images, infographics, and even GIFs.

These visual elements will help people retain the information.

Concluding the Principles of Psychology for Web Design

We hope you've learned a thing or two from the ten principles of psychology that we went over today.

Remember, there are countless other psychological concepts out there that you can use to supplement your design skills.

The best way to leverage these principles of psychology is by not getting too caught up in the science behind them, but rather trying to find an angle that lets you apply it to your designs.

Learning is great, but if you can't apply what you've learned, what's the point? 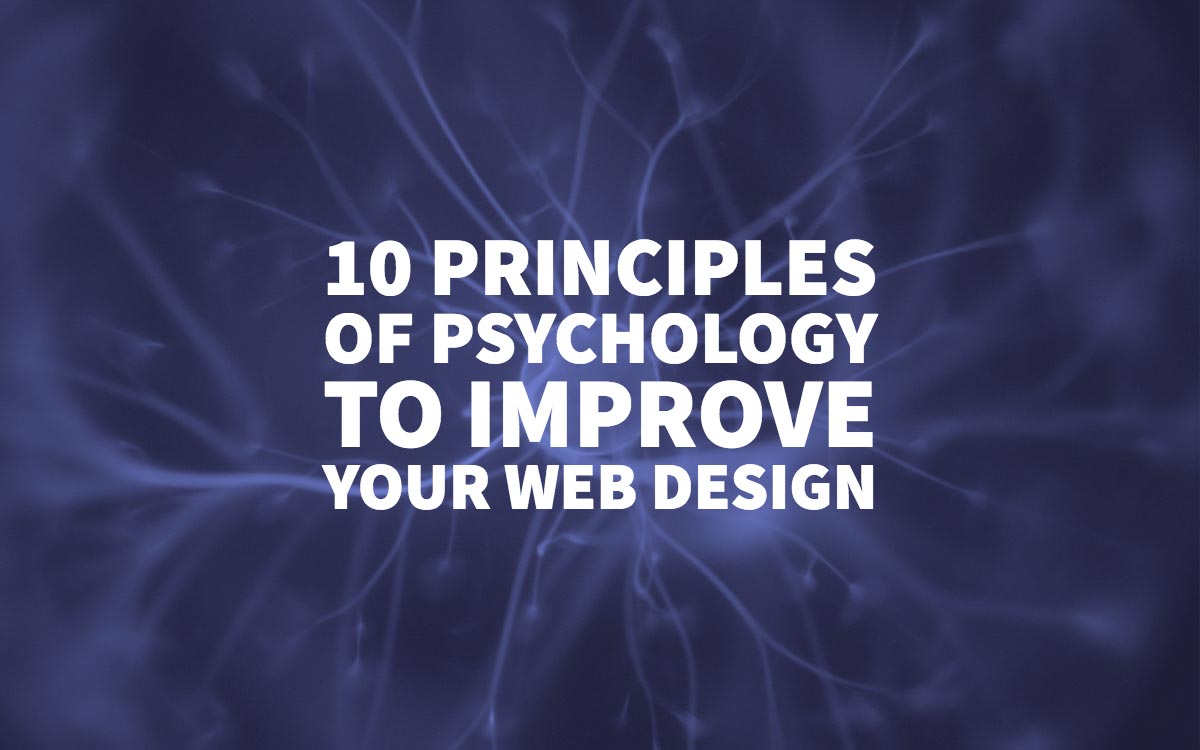