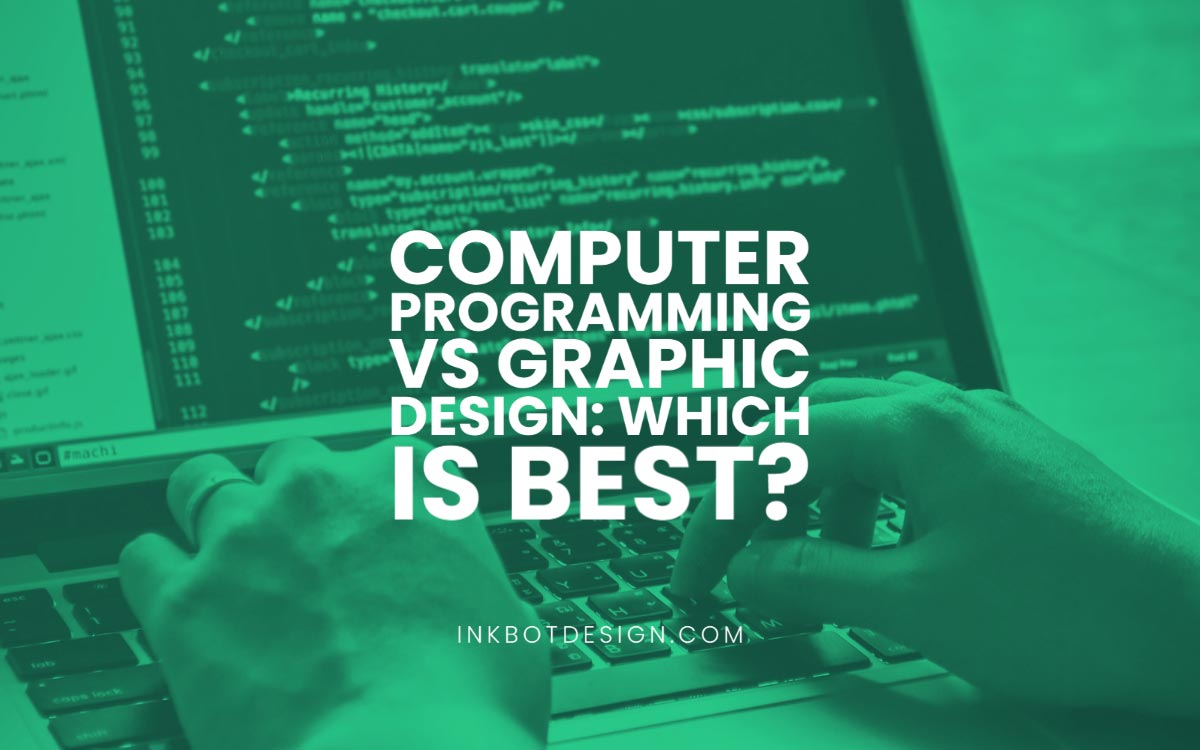 Computer Programming vs Graphic Design: Which is Best?

One of the most prevalent problems novice web developers face is choosing computer programming or graphic design.

Despite these being two separate specialities, they’re still closely connected.

In what way? Let’s find out what these similarities and differences are.

What will I learn? show
Web Development: From Design to Site Making-up
Main Differences
Creativity and Mathematical Constituents
Tools
CV and Salary

Every IT specialist in the design field understands that website development doesn’t end with creating a web layout.

The process consists of many stages.

Different specialists are responsible for specific tasks and, to some extent, interact with each other.

Therefore, IT specialists need to know the specifics of their colleagues for successful cooperation and self-improvement.

As a result of this interaction, web pages appear that an ordinary user sees on the Internet.

There is a specific structure, text, images, and other graphic objects.

To get the big picture, you need to understand the differences between a web designer and a computer programmer.

In general, the description of the professions sounds similar.

They both contribute to the construction of the outer image of the site.

Moreover, in a particular aspect, both specialists perform the same work.

That is, there are no fundamental differences but opposite approaches.

A web designer is a specialist who knows how to visually capture the attention of a client and a website visitor.

This person knows exactly which place you look at first, what colours might annoy you, and what kind of animation will hold you.

Graphic design is what makes people buy anything.

The creation of a corporate identity for a brand is vital in the market.

The IT industry of web design is changing fast.

You may also like:   Psychology of Colours in Web Design - How Colour Affects Perception

So, a genuine designer must multitask and demonstrate the necessary skills to apply them in other fields.

The first examples in graphic design were posters, billboards, and other types of printed information.

A genuine professionalist should also know the latest technologies for creating video graphics, 3D, and animation.

It correlates with web design.

At this stage, a specialist writes the code necessary for the site’s functioning.

That is, the design is adjusted to the page making-up.

A specialist has already gone through dozens of manuals about properly composing a site.

Each step must have a reason.

Statistics have to prevail over individual preferences.

Quality is determined not by attractiveness but by the absence of errors.

On the contrary, a web designer works differently.

A specialist receives a technical assignment, which outlines the requirements for the site’s design.

Based on the request received, a web designer determines the optimal style, colour scheme, the blocks’ arrangement and draws graphic elements.

It’s all about the image of the site.

To put it simply, a designer almost always avoids evaluations.

On the contrary, a developer takes work in binary.

That is, either true or false. There is no in-between.

The set of tools perfectly describes the difference between a designer and a computer programmer.

The web designer operates mainly with such graphic programs as:

Besides, there should be templates because web designers don’t like to deal directly with complex page making-up.

A web developer also uses many of these programs but considers the main tools which create the site foundation. These are the following:

You may also like:   Best Graphic Design Software: What The Professionals Use

It’s not that easy for a novice to work with these programs.

So, during your study, you might need some help.

Assignment Core is where you can ask for programming homework assistance and get your coding assignments done by experts.

Nowadays, most employers often look for specialists who can simultaneously do both of these professions.

Nevertheless, applicants shouldn’t be scattered and create a CV according to their primary specialisation.

For a web designer, it’s essential to include a portfolio for graphic skills assessment.

On the contrary, a developer needs a profile somewhere on Github.

That is, a potential employer would not only appreciate the final work but also could study the code carefully.

Then, it’s turned into code, and a whole website is made from a few lines of code.

To assess the complexity and feasibility of the task objectively, a designer must know how everything works.

For many companies, being able to code is optional.

However, this will undoubtedly be a massive advantage of the work search.

Yet, they have their differences and opposite work approaches.

Since they are intertwined, IT specialists should know the basic information about each other’s work.

A worker who can do both would be a highly valuable candidate on the market now.