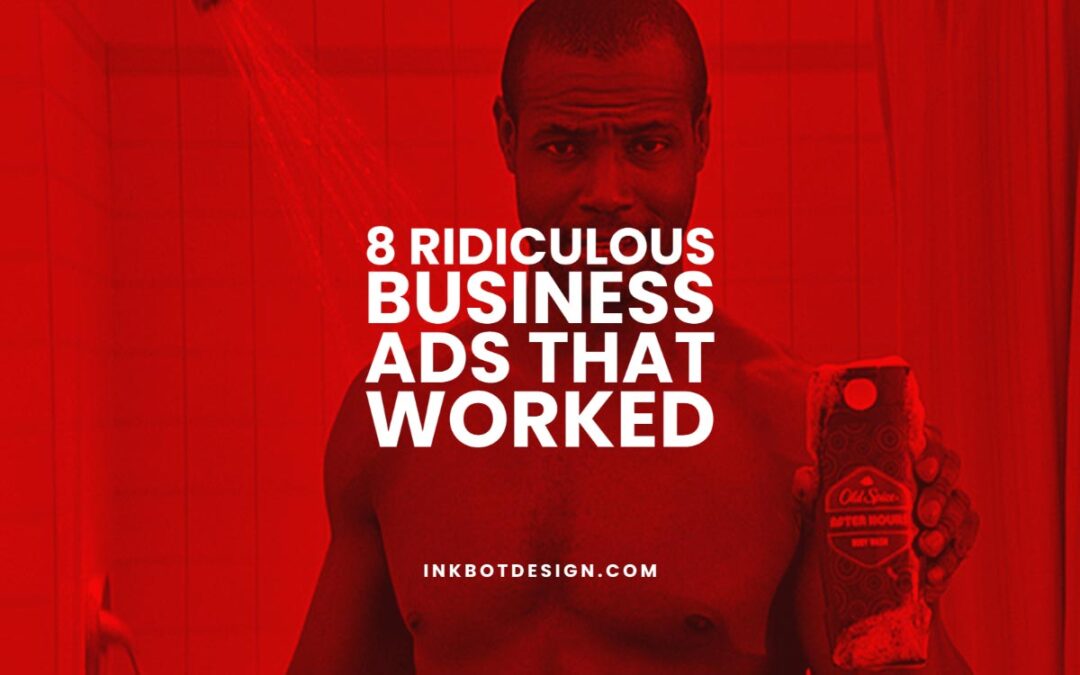 What will I learn? show
What are the Weirdest Advertisements?
Gucci and Clothes for Gods
PepsiCo and Video of Meetings
Dove and Women’s Transformation
Nabisco and Rainbow Cookies
Nivea and Video About Bearded Men
Old Spice and Funny Dialogue in the Shower
IKEA and Pregnancy Test Discount
Mountain Dew and Super Bowl
What is the Secret of Weird Business Ads?
Summing up

When people use devices in all spheres of life, it is not surprising that most companies tend to present their products in pop-up ads.

There is probably someone who likes those irritating ads on their screens while resting, studying, or working.

This is a real challenge, as today, companies present their products in such extraordinary ways, and not all people are ready to see these business ads on their screens.

What are the Weirdest Advertisements?

Every day, people see many business ads, but some of them stand out in the crowd.

Society discusses and criticises them, but after all, this is what experts in marketing aim to do.

If you are not using any Adblocks, then you can see plenty of ridiculous adverts. As a result, you risk being involved in numerous discussions, in which people usually take different sides and like to express their point of view without any hesitation.

Let’s look at the weirdest advertisements and the way they impact brand recognition and reputation.

Gucci and Clothes for Gods

A luxury fashion house, Gucci knows how to attract the attention of society. The company published a GIF-image on Instagram where users could see ancient Greek statues.

With the help of a graphics editor, the authors put a new collection of clothes and accessories on the statues.

The marketing campaign was called “Gucci party for the Olympus gods”.

You can see Dionysus taking a selfie photo in a silk scarf and colourful shorts in the image.

The mythical king Cecrops is wearing sunglasses with high-tops around his neck. And Ilissos and Athena are showing branded handbags.

Ancient Greek seriousness clashes with the fun style of the collection, and it certainly grabs the audience’s attention.

Just imagine, the posts got over 200 thousand likes and about 600 comments.

Some people like the campaign, while others say that it deals with immorality. They encourage society to respect Greek history.

Lots of archaeologists insist on bringing a lawsuit against Gucci. UNESCO even considered the images to be an act of vandalism.

The organisation stated that the clothing manufacturer does not show respect for the World Heritage Sites, and the advertisements cast doubt on the very identity of Greece: “The videos mock symbols that have inspired artists for centuries,” said a statement from UNESCO.

PepsiCo and Video of Meetings

If you have NetGuard Adblock, you would miss adverts from PepsiCo and would not understand numerous images which they published in the networks.

After the appearance of an advertising video on the Pepsi website and YouTube channel in which American model Kendall Jenner, the younger sister of Kim Kardashian, starred.

In the ad, demonstrators with pacifist placards march down the street.

As the procession progresses, they are joined by people of different nationalities and professions: An Asian-looking man is playing the cello, a hijab-wearing photographer, and a model is posing for a photo session (Kendall Jenner).

When the crowd reaches the barrier, Jenner makes her way through the demonstrators and hands the Pepsi to one of the policemen.

He accepts the can of the drink and takes a sip with a smile, after which the crowd cheers. Pepsi said the campaign wanted to highlight “the unity of peace and understanding.”

The creators of the video were accused of being too phantasmagoric.

Commentators felt that the demonstrators and the police were too cheerful and friendly for an actual meeting.

Later, Pepsi apologised for the unfortunate scenario and removed the scandalous video.

The ad was commented on social media by many media personalities, including the editor of the Huffington Post and the host of CNN.

The news feed was also covered by most of the major American publications, such as The Times, Guardian, and Independent. And the most popular copy of the video on YouTube has received over 7 million views.

Dove filmed a video with the slogan, “If you had wash marks on your skin, what would be written on them?”

According to this plot, a woman takes off a T-shirt over her head, and another woman appears in her place.

This trick is done several times. The models featured in the ads were of different races, and, according to the brand, these girls were chosen to show that Dove products are suitable for all skin types.

But on Dove’s official Facebook page, they posted a picture of just four frames in which an African-American woman takes off her T-shirt, and a woman with white skin appears.

Since viewers took the footage out of the context of the full version of the video, users misunderstood the message and accused the company of racism.

The audience on social networks called for a boycott of its products, posting posts with the hashtag # BoycottDove.

Many famous newspapers, including New York Times, talked about this campaign.

In response to the public reaction, the company removed the picture and shared an apology post. However, Internet users did not believe in the company’s sincerity and went on accusing the brand.

Many celebrities, including Naomi Blake and public figure Keith Boykin, drew attention to the company’s message. The event was mentioned in the most popular online publications, for example, The Times and BBC.

On the anniversary of creating the LGBT flag on the official Oreo Facebook page, an image of a rainbow cookie appeared with the words “June 25 | Gay Parade “.

The Oreo post divided its buyers into two camps: those who support the LGBT community and those who criticise its propaganda.

The ad generated a flurry of comments under the post: “This is absolutely disgusting!!! I will NEVER buy anything from Kraft Foods,” said one commentator. “Don’t worry about people boycotting you, Oreo. I never bought a cookie from you, but now I will,” replied another.

Oreo fans have even collected signatures in support of releasing a real rainbow cookie. Unfortunately, the brand was unable to satisfy the petition.

Nivea and Video About Bearded Men

Nivea has developed commercials for YouTube as part of the campaign for the brand.

As a result, three videos were filmed under the titles “Nickname”, “Face Control” and “Date”.

In the plot, a guy gets into awkward situations because of a rare moustache under his nose, but in the end, it always turns out that it was just a bad dream.

The first video presented a situation when classmates ridiculed a young man, inventing nicknames associated with his moustache.

In the second, the guy is not allowed into the club by a security guard. In the third, on a date, he is ignored by a girl who prefers a waiter in a restaurant.

At the same time, the reason for his failures is hidden until the very end of the advertisement: the moustache is covered either by a book stand, or by a guard’s shoulder, or by an account in a restaurant.

The company also life hacks for shaving in the form of GIFs with the main character of the videos on the official website. Afterwards, the person can go to the catalogue of products.

The ad turned out to be very provocative; many supporters of the moustache found it offensive and decided that the brand was making fun of guys with a moustache.

The videos collected from 2.5 million to 2.7 million views and about 150 comments.

Old Spice and Funny Dialogue in the Shower

The company realised that women make most decisions on purchasing the products.

As a result, they introduced a funny video in which the guy with funny non-sequitur dialogue managed to grab ladies’ attention to popular men’s body wash products.

Perhaps the ad was unpredictable and featured meme-able humour, but the experts aimed to create a viral hit, and they achieved this goal.

Even today, people remember that ad and discuss its success.

The advertisement took the leading industry award and collected millions of views on YouTube. It remains to be one of the funniest and most popular ads on the market.

Together with Mercene labs, IKEA worked out a technology that lets you save some money if your pregnancy test in the magazine is positive.

The company suggested that the woman pee on the ad and find out whether she is pregnant. If yes, then the woman will see a new price for cribs.

Many people consider this marketing campaign to be creepy.

They liked the idea of getting a discount, but they agreed that the company could choose a more sanitary way to introduce a new purchasing option for pregnant ladies.

They commented and shared the IKEA video, expressing the pros and cons of such a weird idea.

Finally, a nightmare-inducing Super Bowl ad that Mountain Dew presented should be mentioned.

The company presented a video for the Kickstarter drink that got impressive popularity over a single night.

The audience was divided into two groups. Some people considered the ad funny and cool, while others said it was annoying, creepy, and even stupid.

All in all, there was probably a person who remained indifferent.

The advert got about 2 million views and 300 thousand interactions on social media.

What is the Secret of Weird Business Ads?

The astonishing popularity of the above–mentioned business ads is not surprising at all.

The primary purpose of any advertising campaign is to attract the attention of the target audience.

You will hardly pay attention to the video that presents Old Spice in another context.

And most women will hurry up to the nearby shop after watching such a funny video.

The same is true for contradictory ads like Gucci and clothes for Gods or rainbow cookies from Oreo.

They provoked emotions, discussions, and even a negative context made the companies appear in top magazines, hot news, and popular feeding.

Advertising should be about engaging – drawing people’s attention to something that will make them react.

To do this, it must be interesting and sometimes even provocative.

Yes, it’s risky. But going unnoticed is an even greater risk.

If you are not visible among competitors, nobody is interested in you. This is the primary rule of popular companies, and even including them in this list of ridiculous adverts increases their popularity.

Those people who are sure that negative discussions may play a nasty trick with brands are sorely mistaken.

All those business ads help companies stand out in the crowd and attract more potential customers, as there are always people who support the campaign idea and who are against it.

These weird business ads provoked discussion and controversy on the network, and they were criticised and talked about.

They touched upon the most controversial topics such as racism, sexism, violence, and the rights of sexual minorities.

It means the companies achieved their goal and attracted the audience’s attention.

It doesn’t matter whether these discussions were positive or negative, as the experts in marketing got what they wanted.

However, if you do not want to become another advertising campaign victim, you can learn more about NetGuard AdBlock and bypass the irritating adverts.

With excellent protection, you will leave no chance for companies to watch your online activities and disturb you with weird ads. You can try it for free in a trial period.

Author Bio: Stacey Davis is a popular expert in marketing, known for excellent articles on digital advertisements. She presents a fresh view on modern campaigns and explains complex issues in simple words. The audience loves the style and tone of Stacey Davis.