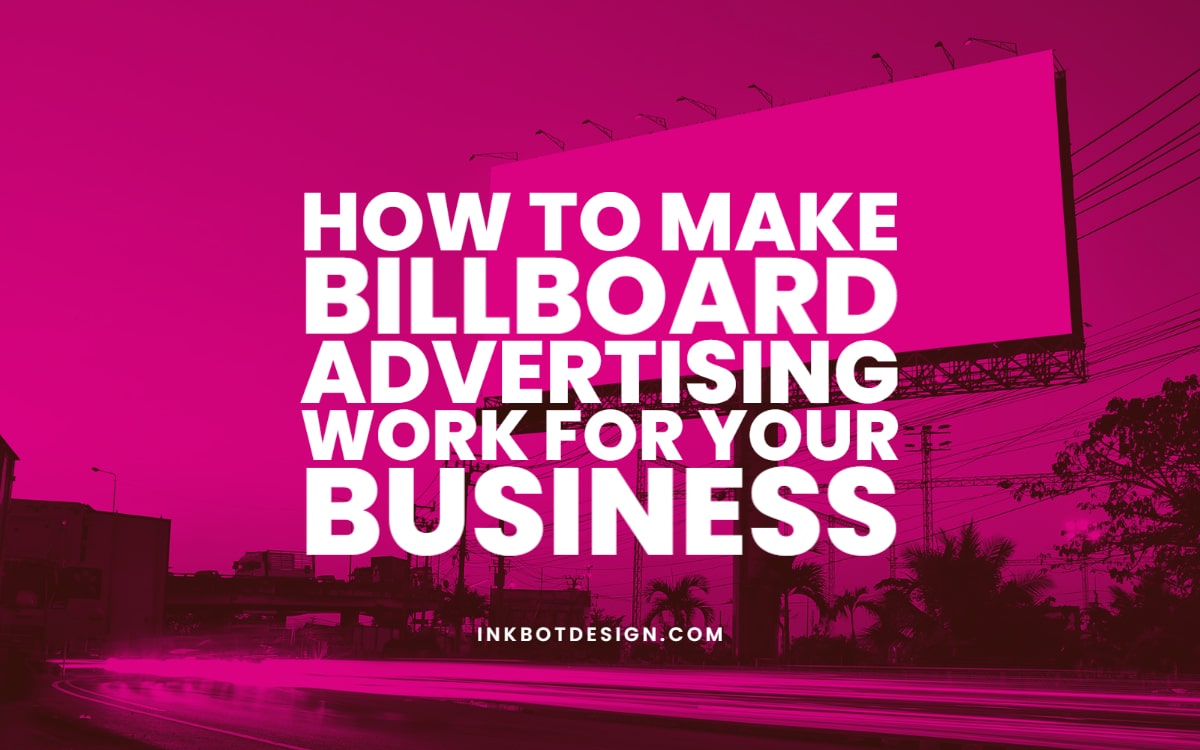 How to Make Billboard Advertising Work for Your Business

Advertising on billboards is one of the most effective ways to get your brand out there. You can create a message that stands out from the crowd and ensure it gets the attention of people passing by.

In this article, we’ll walk through the basics of billboard advertising so that you can create your very own billboard ad that brings in new customers and keeps old customers coming back.

If you’re a small business owner, you may wonder how to spend your advertising dollars effectively and efficiently. Billboards are one of the most powerful forms of advertising, but they can also be expensive. Fortunately, if you do it right, you can get a bang for your buck.

In this guide, I’ll explain how you can use billboards to promote your business, reach your target market, and increase sales.

What is Billboard Advertising?

In the United States, most billboard advertising is found in rural areas. As a result, it’s often overlooked by residents in cities and suburbs, and the advertisements are typically ignored unless they are particularly attention-grabbing.

While the advertisements are posted in public locations, they are typically intended to reach the most significant number of people in the shortest amount of time, making them highly visible to passersby. Many people are even more likely to see billboards while driving.

You may also like:   11 Best Landing Pages that Have Our Full Attention

The advertisements can appear in a variety of formats. For example, some are designed to draw attention to a specific product or service. Other advertisements encourage you to visit a website or call a telephone number.

How Effective is Billboard Advertising?

According to studies, billboards are one of the most powerful forms of advertising, yet many businesses spend far less money on advertising them than they could. Why?

Advertising on billboards costs less per thousand exposures than on other media, so even a low budget can bring in more than a higher budget would.

These are the main reasons why billboard advertising is effective. However, they’re also not very effective at reaching specific audiences.

While billboards are an excellent option for businesses that want to reach a broad audience, they aren’t an effective tool for smaller companies that need targeted advertising.

For example, an oil company looking to promote its brand with a giant billboard in Times Square will likely reach a large audience and get much exposure. But this means many people will see the message, potentially influencing the public’s opinion of their brand.

On the other hand, a small business located in a rural area won’t be able to compete with the larger companies in terms of visibility. However, it will still succeed with a billboard in big cities. In this case, the business only targets a select number of people, and the message will be more impactful.

While billboards are an excellent tool for businesses that need to spread a general message or attract a mass audience, they aren’t a practical option for targeting a small number of individuals.

In the last decade, billboards have become a more affordable way to advertise, especially for smaller businesses that don’t need to target a broad audience.

This is the same case in the online advertising world.

Most large companies that advertise on sites like Google Ads spend millions of dollars on ads each month, but for smaller businesses, the price tag can be as little as a few hundred dollars per month.

You may also like:   Web Development Budget: 12 Ways to Spend Your Money

Regarding billboards, there are several ways to lower the cost. First, look for places that charge per square foot rather than a flat rate. This will provide a better return on investment, as a business that uses a low-cost location can spend less on the ad than one that spends more on a high-cost spot.

Also, look for locations close to busy roadways and tourist destinations. These are ideal places to put a billboard, as it will expose people driving past to the ad.

How Billboard Advertising Can Impact Business

Regardless of where you place your billboard can help your business attract customers and generate more leads.

Many people are likelier to notice a billboard in the middle of a major city or near a crowded intersection, so location choice is essential.

But it’s also essential to pay attention to the content. If the ad is vague or general, it may not attract anyone interested in the business, and there’s a good chance that no one will even see it.

It’s better to spend time writing a message that will appeal to potential customers and ensure that it’s targeted to the type of customer the business is trying to reach.

When it comes to digital advertising, it’s easier to target your audience and create a campaign that works. However, billboards are a proven, effective way to get a message in front of potential customers and generate leads.

Benefits of a Billboard Advertisement Program

There are several reasons why businesses use billboard advertising programs.

You may also like:   Step-By-Step Guide To Making Product Catalogues

There are three main benefits to a billboard advertising program for a business:

Billboards are a popular form of advertising. They’re a permanent way to get the attention of potential customers. Billboards can promote in-store events and online promotions, helping your business be more visible.

Billboards are a great way to build brand recognition and encourage customer loyalty. You can use them to promote special offers, discounts, new products, seasonal events, or any other information you want to share with your customers.

Billboards are a great way to keep your name in the public eye. Customers can see your message at a glance, and your billboard can help you to generate interest in your product or service.

What Are the Downsides of a Billboard Advertising Program?

While billboards are a great way to attract and retain customers, they can have drawbacks.

When planning a billboard advertising program, it’s essential to consider the benefits and drawbacks of the billboard before making your decision.

Why Should I Hire a Professional Billboard Advertising Company?

A professional billboard advertising company will have experience in designing, installing, and maintaining billboards. They can help ensure that the billboard is installed safely and correctly, providing you with a quality product and protecting your investment.

Some companies are also equipped to handle the maintenance and repair of your billboards. This is especially helpful if you’re not confident in your billboard installer skills or don’t want to pay for maintenance or repair services.

The Different Types of Billboard Ads

Billboard advertisements are a ubiquitous form of public advertising. Whether displayed on street poles, walls, or billboards, they are a primary source of visual communication.

There are two basic categories of billboards:

A DTC billboard is a single advertisement that appeals directly to the viewer. DTC ads are usually created with one goal: selling a product or service. They typically do not include any advertiser branding except for identifying logos.

A product placement ad might appear in a storefront window or within a more extensive advertisement or campaign. For example, a clothing store might display a large DTC ad featuring a celebrity wearing a piece of clothing. This ad is designed to appeal to the viewer, but it’s also serving as an advertisement for the clothing brand.

A product placement ad often appears as part of a larger display, like in a storefront window. The primary purpose of a product placement ad is to advertise a specific product or service, while the ad may also contain branding. For example, a restaurant might display a large DTC ad that promotes its restaurant and features the name of the food in the ad. But it could also feature the name of a popular meal or dish.

Can a Billboard Ad Increase My Sales?

Yes. Depending on the product, a billboard ad can increase sales. You’ll likely want to consider a billboard ad if you’re selling your product, but there are exceptions. For example, selling services, such as landscaping or construction, you may not need a billboard ad to attract clients. However, creating a large ad with your logo or visual branding can still be helpful.

For many people, a billboard ad is a very effective way to get the word out about their business. But it’s important to know that a billboard ad is not always the best way to advertise. For example, suppose your customers are already familiar with your business and recognise your logo. In that case, a billboard ad will probably have less impact than traditional advertising, such as a brochure or a flyer.

You may also like:   The Impact of GDPR Upon Digital Marketing Practices

When Should I Consider Billboard Advertising?

Sometimes, a billboard ad can be a good choice for your business.

How much does Billboard Advertising Cost?

The cost of advertising will vary based on the number of people who see your billboard, your business size, the type of billboard you are purchasing, the location where the billboard is placed, and the media used.

Advertising can cost anywhere from pennies to thousands of dollars for one day, week, or month. The higher the dollar amount you are willing to spend, the greater your advertising exposure will receive.

A giant billboard will be much more expensive than a smaller one, but it is worth it if you want more exposure.

Billboards are an incredibly effective advertising tool. They’re everywhere, they’re affordable, and they’re easy to install. So they’re a no-brainer for businesses who want to advertise their goods and services. But they’re also much work. So here’s what you need to know if you’re planning to put up a bunch of them.

They’re the perfect solution for businesses that need a quick, cheap exposure boost. But they’re also time-consuming strategies that won’t scale with your business.

If you want to invest in billboards, I recommend choosing a quality provider with a proven track record.

Want to learn more about billboard advertising? Sign up for the weekly newsletter below.