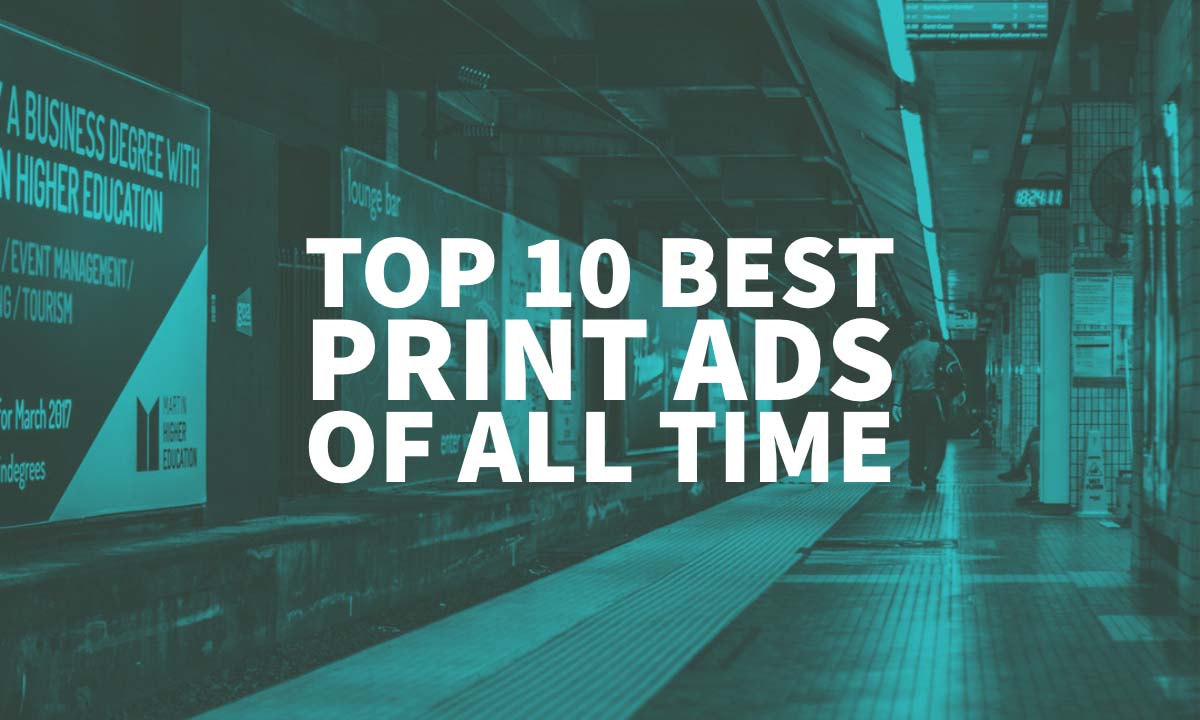 In a world where digital advertising represents a predominant marketing model, it is hard to believe that traditional formats still play a significant role in brand awareness and lead generation.

However, the fact remains that advertising tactics such as creative print ads are not disappearing.

On the contrary, industry reports prove the evergreen potential of print advertising:

70% of Americans prefer to read on paper, and 67% prefer printed materials over digital

However, it takes a great piece of print content to evoke emotions and inspire customer interest.

If you want to exploit this type of marketing strategy, you better make sure to display a fair share of inspiration and creativity.

The quality of a print ad depends mostly on these traits, but we also want to show you a few examples to help you brainstorm different ideas when you work with an advertising agency.

Here are the top ten best print ads of all time!

Keloptic is an online optician selling eyeglasses and sunglasses.

It doesn’t sound too impressive at first, but this print ad campaign might as well change your opinion about the company.

Namely, the portrait is well-known for its blurry colour scheme which makes no clear distinctions between different hues and tones.

However, here is the plot twist: Keloptic put eyeglasses in front of the painting to reveal Van Gogh’s face and show the power of their products.

One of the best print ads of all time – So simple, but so clever!

2 – SANCCOB: Save the Penguins

SANCCOB is a non-profit organisation that helps seabirds to avoid extinction.

One of their campaigns was aimed at protecting the African penguin, so they worked with an advertising agency to produce a series of print advertisement examples to raise awareness about this issue.

However, SANCCOB made it different by adding a small dose of optical illusions to come up with a more intriguing solution.

This ad takes the inverted pyramid form to show viewers how the number of African penguins keeps declining over time.

The technique is complicated, but the message is unambiguous.

Another incredible illustration comes from the French Ministry of Health.

They wanted to spread the word about the growing problem of childhood obesity, warning parents that “obesity starts at a young age.”

The print ad campaign is plain but effective: it shows an ice cream with a fat belly on top of it.

What thrills us the most about this piece of content is that it uses bright and cheerful colours, but still manages to send a not-so-shiny message to the kids and their parents.

Many organisations are fighting against car accidents, but not too many have achieved such a massive social media awareness like Ecovia with its “Stop the Violence” advertising campaign.

KFC, one of the most popular fast-food chains worldwide, ran out of chicken earlier this year.

It was a colossal disaster for the brand that built the whole empire on chicken, so they had to close almost a thousand US-based outlets temporarily.

However, their advertising agency used the opportunity to play with the famous KFC acronym and create one of the best print ads that simply says FCK.

It was a cool way to apologise but also a great marketing trick that made the world talk about KFC from a different point of view.

Chupa Chups is a famous brand, while lollipops remain their most important product.

However, when Chupa Chups decided to follow the growing market trend and create a sugar-free lollipop, they needed an excellent print ad to spread the word about it.

Their advertising agency passed the exam and let the whole world know about the new product in one of the best print ads of the year.

Ants taking the long path to avoid the lollipop are not something you’d expect to see from Chupa Chups, but they knew it would make an impression on viewers in this case.

7 – Jeep Advertising Agency: See What You Want to See

Jeep is well-known for its terrain vehicles.

The company vision is to manufacture cars that can take you anywhere and enable you to see what you want to see.

The Jeep marketing team used this motto to design a two-faced print ad that shows a different animal based on your viewpoint.

While their point might be a little too clever for the average customer, the copy makes things clear.

This time, Opel launched a campaign to warn about the consequences of texting while driving.

What makes this ad different from similar illustrations is that it uses nothing more than a black background and a short line of text to display an utterly understandable statement.

The moment you see this print ad, you know you will never again type an SMS while driving.

The ninth example on our list comes from the Republic of South Africa.

A recruiting platform PNET made this print ad to tell people they don’t have to stay covered in mould, playing boring desktop computer games forever.

It’s a timely message for everyone who feels stuck at his/her workplace and cannot see the light at the end of the tunnel.

However, this print ad is not only a funny illustration – it inspires people to take the desired action and apply for a new job when they see an excellent opportunity.

People say that an image is worth a thousand words.

Nothing proves this statement as much as Pedigree’s print ad where you can see how people look like with and without a dog.

Influenced by the simple comparison between the two images, viewers can quickly decide to adopt a dog.

Conclusion on the best Print Ads of All-time

Digital advertising might be the most dominant marketing force of our era, but creative printed adverts remain highly effective and accessible among global audiences.

This happens primarily because a creative ad campaign can be very creative and hence get stuck in our minds for a long time.

In this post, we presented you with the top 10 best print ads campaigns of all time.

These examples should give you enough materials to start thinking about your own print advertisement and we hope you will soon come up with fresh solutions that will be as successful as the ones we described above.

Author Bio: Peter Hill is a professional writer and journalist. He is a socially active person, engaged in the photo and video editing. You can find him on Twitter and Facebook.

Is print advertising a decreasing market?

Many marketing and advertising agencies still need to perform a print for their top-paying clients.

Why? Print ads require the most effort, images, and copywriting to succeed.

In this regard, a print advert permits an organisation to reveal its complete range of abilities.

A monthly journal may additionally sit down in a waiting room for that entire month or longer. Those ads have a more lasting effect than a flashing banner or 30 seconds visual.

With there being fewer guides now, people who do have advertisements stand out more as it’s less crowded.

Human beings like print publications, so the commercials are more reliably relied on. The content material in print is curated — your advert won’t be seen next to debatable content material.

How can you create the best print ads?

Observe the publication you are marketing in and seize its audience.

Have an incredible headline and attractive visual.

Make sure everything is high-res.

Are newspaper commercials useful in 2021?

They aren’t as effective as they have been since the internet — which is why print journalism started its sad decline, after its primary source of sales, employment and advertisements, migrated online.
However, print stays a powerful medium for marketing.

Many papers make income with the useful resource of printing the local circulars.

And in a few markets, television advertising is price-prohibitive or no longer available.

The rate of print commercials is linked to the newspaper, so advertising and marketing in a small weekly might be an awful lot cheaper and better at achieving a small company’s target market.