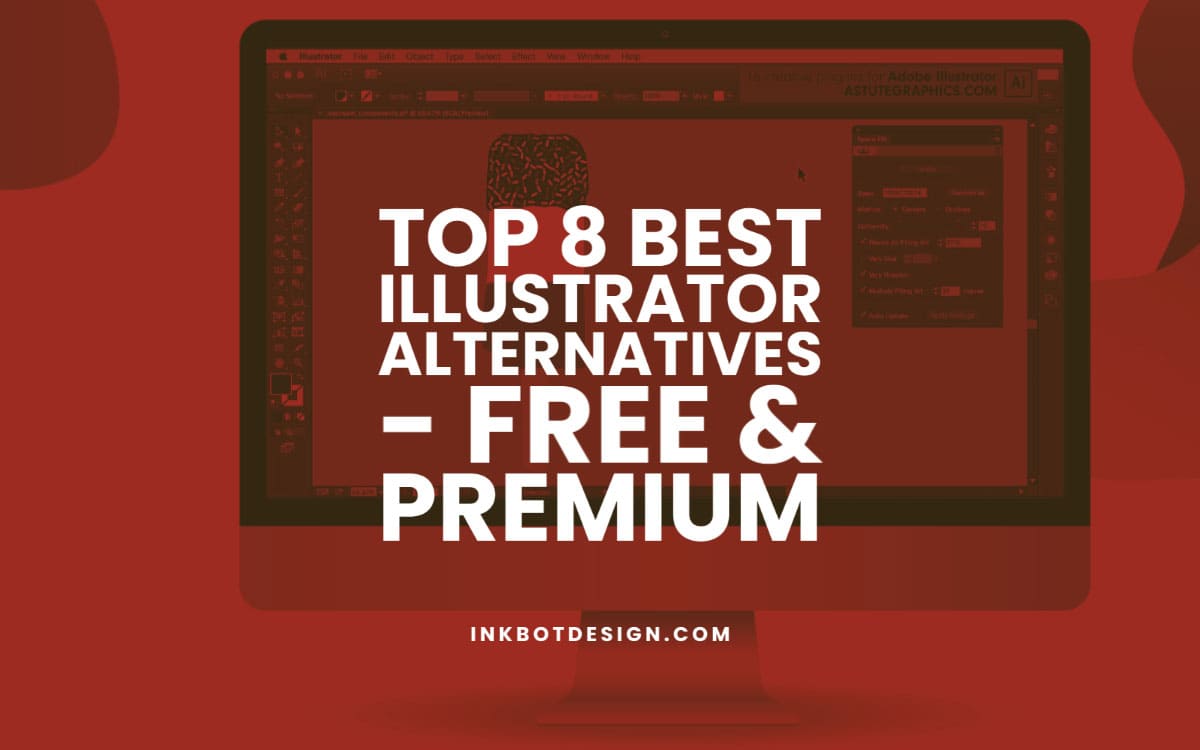 Finding the best design software is not always easy, especially when many different products are available on the market.

From free apps to subscription-based graphic design tools, it can seem like there are an endless amount of vector graphic software products to choose from.

When most people think about graphic design software, Adobe Illustrator is the product that usually comes to mind first.

But, you may wonder if this well-known product is the best option to suit your requirements, or if there are any suitable alternatives.

Here are eight of the best Adobe Illustrator alternatives available for you to consider:

What is Adobe Illustrator?

Illustrator is a program created by the software giant – Adobe. Adobe Illustrator is widely used by designers and creatives worldwide and is considered an industry-standard vector graphics software product.

The History of Adobe Illustrator Software

Adobe started creating Illustrator way back in 1985. This first version of Illustrator was designed for use with the Apple Macintosh and sold in 1987.

Adobe released a version of Illustrator compatible with Windows in 1989, but this received mixed reviews.

As a result, it was not until 1997 that an updated version of Illustrator was released simultaneously for both Windows and Mac platforms.

Since its initial release in 1987, Adobe Illustrator has undergone many changes. 25 versions of the software have been released over its 34 years. The most recent version, Illustrator CC 2021, was released in October 2020.

Currently, Illustrator is available as part of Adobe’s Creative Cloud. The Creative Cloud is a collection of more than creative programs, including Adobe’s other well-known programs, Photoshop and InDesign.

One of the reasons Adobe Illustrator is so popular is the wide range of features that it provides. Here are some of the main features that this industry-standard program has to offer:

You may also like:   7 Tips to Optimise your Freelancing Design Business

Why is Illustrator so Popular?

Adobe Illustrator is the industry-standard program for designers, but what makes this well-established software so popular?

Part of Illustrator’s appeal is its compatibility with other programs within the Adobe Creative Cloud.

This compatibility enables designers to utilise a full range of design tools to achieve the results they are hoping for from their end designs.

Another reason for Illustrator’s popularity is that it can be used wherever you are, thanks to the ability to use it both on the desktop and the iPad.

Another significant feature Adobe Illustrator offers is a collaboration with other users on each design in real-time without emailing large files back and forth.

If you are looking for Illustrator alternatives to consider, then read on to find out more about eight of the best alternative programs for your design needs:

Vectornator is a popular graphic design tool created in 2017 and ranks as one of the top Adobe Illustrator Alternatives.

As its name suggests, Vectornator is a vector graphic design tool used worldwide by big-name companies and downloaded millions of times.

Vectornator was recently mentioned in the Apple M1 iMac release event because of its usage of Apple’s ML Kit for its AI-powered, time-saving features.

In addition, Vectornator extensively uses multi-touch gestures and innovative UI, with a common code base between iPadOS and macOS, bringing desktop power with you wherever you go.

Which Platforms is Vectornator Available On?

Vectornator can be used on the Mac, iPad, and iPhone.

Vectorantor is entirely free to use. You simply need to download it from the App Store or Mac App Store if you plan to use Vectornator on a Mac.

Like Illustrator, Affinity Designer is another vector graphic software tool that was first released in 2014.

This award-winning program has many benefits and is becoming a popular choice among creatives.

Which Platforms is Affinity Designer Available On?

Affinity Designer is available for Mac, iPad, and Windows.

You may also like:   What is the Best Budget Printer for Designers?

Free trials are also available for the macOS and Windows versions of Affinity Designer.

Gravit Designer was first introduced in 2014. This free vector-based graphic design tool is a popular software choice for designers and has many uses.

Which Platforms is Gravit Designer Available On?

Gravit Designer is the free version of this graphic design software, but Gravit Designer Pro may be a better choice if you want to experience more features.

CorelDRAW is part of the CorelDRAW Graphics Suite. CorelDRAW was the first vector-based graphic design program designed for use with Windows.

CorelDRAW was released in 1989 and has enjoyed over 30 years as a popular design tool.

To date, 23 versions of the program have been released. The latest version of CorelDRAW was released in March 2021.

Which Platforms is CorelDRAW Available On?

The introduction of a Mac OS-compatible software version was first available around 20 years ago, and after a long absence, a Mac version of CorelDRAW is now available.

You may also like:   How to Create a Branding Style Guide for your Business

There are a few different CorelDRAW plans for individuals and organisations.

Free trials of the CorelDRAW Graphics Suite 2021 are available to download for Windows and Mac. Free trials last for 15 days.

Inkscape is a unique vector graphic software tool that was first developed in 2003. The latest version of Inkscape was released in January 2021

This well-established image tool is a member of the Software Freedom Conservancy and is a non-profit organisation. Members of the Inkscape Project author Inkscape, and the Inkscape community provides user support.

Which Platforms is Inkscape Available On?

Inkscape is compatible with various platforms, including Mac OS X, GNU/Linux, and Windows.

Inkscape is free to download and free to use.

Sketch was first introduced in 2010 and is a popular digital design tool. Unlike some of the other Illustrator alternatives listed here, Sketch is used less for print design and illustration purposes and more for UI and UX design for apps and websites.

Which Platforms is Sketch Available On?

Sketch is only available on the Mac OS.

A Mac-Only license for the Mac app is also available for Sketch. The Mac-only license does not include many Sketch functions available on the two main pricing plans and works with local documents only.

You may also like:   Difficulties & Challenges in Learning Graphic Design

The Mac-Only license is available for individuals and teams for a one-off payment of $99per device.

Which Platforms is Graphic Available On?

Graphic is available in a choice of price plans, and the cost of these depends on which version of Graphic you require; Mac, iPad, or iPhone.

Each of the apps is available to download from the App Store.

Figma is a vector graphics editing tool and much more. Figma enables users to create designs, prototype them, and collaborate all in one program.

Figma was launched in 2016 and has proliferated in the past five years to become a popular choice of design software.

Which Platforms is Figma available on?

Figma is mainly a web-based tool, so it runs across platforms. You can use Figma with Windows, Mac OS, Linux, and Chrome OS.

Figma offers a range of pricing options for different users. It is possible to use a free version of Figma forever.

You may also like:   Top 20 3D Lettering Brushes for Procreate Typography

Glorify is an easy-to-use yet powerful graphic design tool that allows you to plan, design, launch and analyse all your big ideas in one place. It is a lifesaver if you want to create high-quality images without the need for expensive outsourcing.

Glorify makes design accessible to all. Entrepreneurs, marketers, agency owners, designers and busy professionals can use this tool to create aesthetic images that convert.

It is also super valuable for eCommerce enthusiasts who need a simple, quick solution to make their products stand out in a saturated market. With simple tools for beginners and advanced features for designers, Glorify provides a great alternative to other design tools.

As you can see, some strong contenders are available right now to choose between when trying to find the perfect graphic design software.

Each of these contenders has its pros and cons to think about and its unique features.

When weighing up which product is right for you, consider several factors to help you decide. You may want to think about the following before making your final choice:

Carefully considering the above questions should help you narrow your choices and find the perfect Adobe Illustrator alternative for your projects.

Author Bio: Darya Jandossova Troncoso is a photographer, artist, and writer working on her first novel and managing a digital marketing blog – MarketSplash. She enjoys spending time with her family in her spare time, cooking, creating art, and learning everything there is to know about digital marketing.