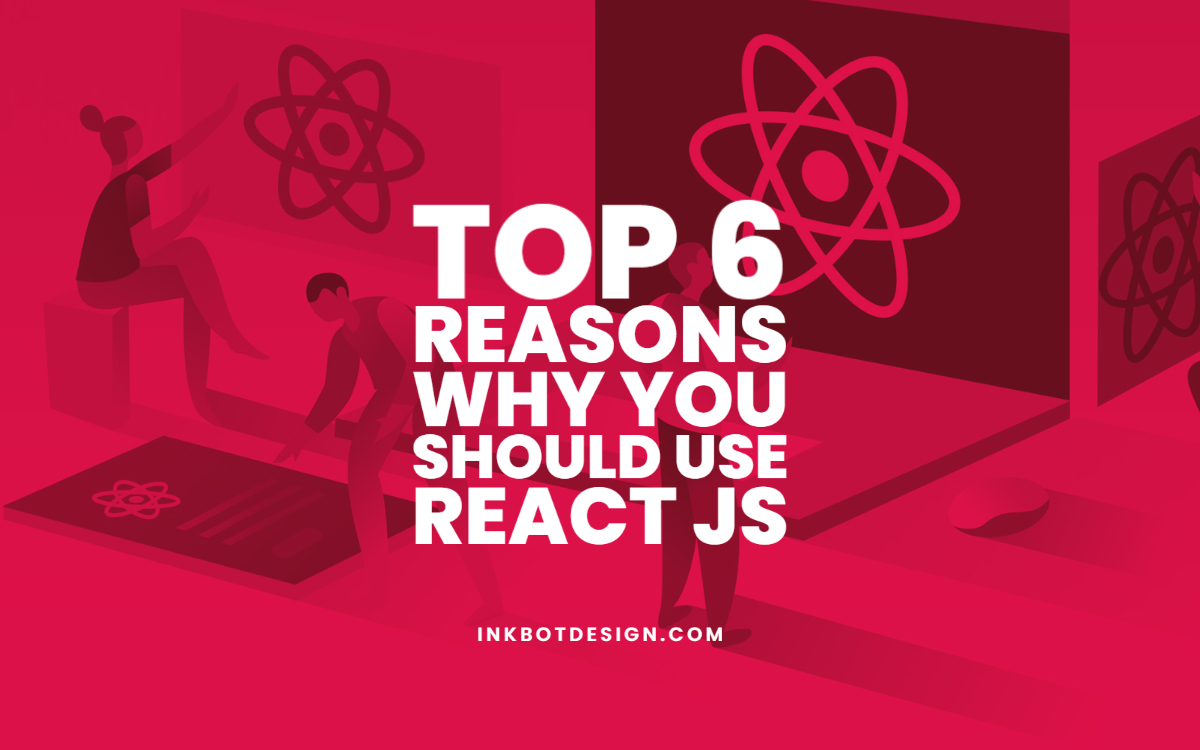 Top 6 Reasons Why You Should Use React JS

React JS is a JavaScript library for building user interfaces. React was first released in 2013 and has been growing in popularity ever since.

React is a declarative, efficient, and flexible JavaScript library for building user interfaces. Meta (formerly Facebook) and Instagram maintain it.

It has an extensive ecosystem of libraries and tools that make it the best option for the modern web react development team.

We’ve compiled the top 6 reasons to use React. We’ll go through some of the unique characteristics of React JS that differentiate it aside from other frameworks like Backbone JS and Angular.

But before that, a little explanation of React JS and why it is so powerful.

What will I learn? show
React JS: What is it?
How Does React JS Work?
6 Reasons Why Developers Should Use React
1 – React gives flexibility
2 – React gives high-performance
3 – React has reusable components
4 – React gives faster development
5 – React is very popular
6 – React has effective testing and functionality
Overall Thoughts

React JS: What is it?

React JS is a JavaScript component library for online and application interface design. Jordan Walke created it in 2011 to create quick and interactive websites with JavaScript.

This makes it ideal for building single-page applications (SPA). A SPA has one main content area, which contains all the pages’ content, including navigation links.

Because these components don’t require data from a database or other remote servers, a SPA’s load time is faster than traditional website loads.

While this speed improvement isn’t noticeable when browsing most sites, it becomes apparent once you try loading a site like YouTube. You may notice videos playing before their respective buttons appear on the screen.

You may also like:   Top 7 SEO Guidelines for Designers

Or perhaps images seem to pop up first instead of appearing right away alongside text. These are just two examples of why people prefer SPAs.

In addition to building complex, functional user interfaces, another benefit of React.js is that it helps programmers keep things organised.

If you have multiple users interacting with different parts of a webpage, React offers several ways to manage each component separately. For example, you could use selectors to display information differently depending on who made the request.

A selector lets us apply separate style sheets to different areas of our DOM structure, meaning we wouldn’t need to duplicate our styling across many files. We would only have to change them in one place.

Not only does this reduce the amount of work needed to maintain large projects, but it also keeps our code cleaner overall.

Another feature that React gives us is the ability to reuse pieces of code between various components. One way this is done is through variables. Variables let us store values temporarily until later on.

When we call upon a variable later, the computer automatically pulls whatever value it stored earlier and applies it.

You can accomplish similar actions using jQuery too. However, unlike jQuery, React doesn’t manipulate the document directly. Each element it renders gets replaced entirely with newly generated ones.

However, we could append additional content to existing documents with jQuery rather than recreating them completely.

How Does React JS Work?

Events usually happen due to mouse clicks, keyboard presses, etc., although they can also occur based on timers, AJAX requests, etc. Event handlers run in response to such events.

When an event occurs, the system sends a message down the chain of functions that handle it. As long as there’s still no return statement present, the process continues further down the line. Once no more statements are left or returned present, the program ends.

You may also like:   Top 10 WordPress Themes to Pick for your Small Business

Let’s look at why developers use React JS to create user-friendly websites.

6 Reasons Why Developers Should Use React

React’s flexibility might be a significant benefit based on your goals. It allows you to choose how you would like to handle testing, routing, and folder organisation.

Aside from the environment, React’s lack of bias means you may utilise it on various projects, including web applications, static sites, mobile apps, and even virtual reality.

Because of its relationship with Facebook, React is compatible with all major browsers, including earlier versions of Internet Explorer.

React development team can also use React in existing apps as another essential component of its flexibility.

In reality, each library and framework strive to provide the best performance possible, yet React dominated the pack.

You already know it was developed for the busiest website on the internet (Facebook), so if you want to keep it running, you’ll need to employ the most feature-packed technology accessible.

If Facebook can manage it, React can take everything, allowing you to create the most complex and high-performance platforms you’ve ever imagined.

React has a component-based approach. Your building pieces are called components. You start with tiny components like buttons, dropdown menus, and checkboxes, and then build wrapper components out of those smaller parts.

Then you create wrapper components at a greater level. It continues this way until you have only one root component, your application.

Every component has its logic within it. This approach produces some incredible results. You can reuse components in any situation.

Consequently, your app has a uniform aesthetic, code reuse makes it simpler to manage and extend your codebase, and development is simple.

You may also like:   14 Skills You Need to Build a Strong Web Design Career

Regarding software development nowadays, development speed is one of the most crucial factors to consider.

When you find a solution to the challenge of getting things done more quickly, you instantly save money on development costs while earning more money.

React.js is quite beneficial in terms of increasing the developer’s workflow. Using reusable components – as mentioned above – you can significantly boost your development time while maintaining a consistent overall appearance throughout your application.

Historically, the React ecosystem has been one of the fastest-growing open-source environments in the world of web development.

Every month, the number of application projects based on this technology grows at an exponentially increasing rate.

As a result of its widespread adoption and widespread use, React is quickly becoming the front-end framework of choice for many large projects and significant companies.

Because of many contributors and an incredibly active community, the React documentation is improving daily, and the vast majority of the bugs that have ever been recorded have been corrected.

6 – React has effective testing and functionality

It is simple to test React applications because of the one-way flow of data and the single responsibility principle inherent in its components.

Because of the consistent data flow and modular programming techniques usually employed in React development, it is possible to spot errors at an earlier stage.

All of this contributes to efficient teamwork and project unwavering quality and longevity.

Each technology appears to be aiming for the same goal: to make things easier, quicker, and eventually better.

But React developers have access to a wide range of creative, refined solutions that developers use worldwide, allowing them to work more productive than any other developers.

The upward tendency in this direction is the most reliable indicator of long-term support and growth of this framework.

What do you think? Does your team use React to build your next app project? Let me know in the comments below.