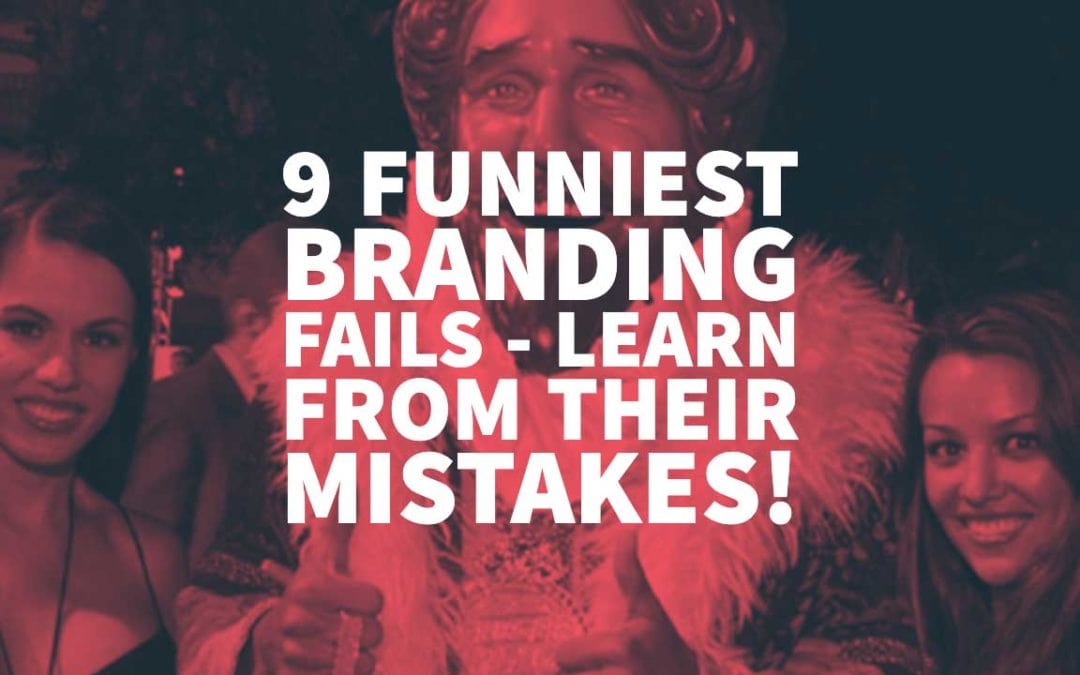 At the best of times, a brand or marketing campaign should get people excited about a product, service or even a company as a whole, and generate interest that leads to strong sales and a great image.

See the likes of the wonderfully simple yet often silly IKEA adverts, or the wholesome, zeitgeist established Christmas campaigns of Coca Cola for how branding should be done.

However, not all marketing can be as effective, and even a titan of the industry can fall hard for some terrible practices; including Coca Cola.

Some of these branding fails can be so titanic in nature that they sink the entire company, yet most of the times they’re simply hilarious examples of what you should avoid when trying your hand at branding.

Each and every mistake made by companies can serve as an excellent lesson for future branding attempts, and by taking a look at the humorous, confusing and even downright ridiculous decisions made within the realms of marketing offices can provide valuable experience to learn from, as well as things to laugh at.

Below are Rombus Packaging’s favourites that have shown time and time again how taking the time to proofread an idea, or show it around a group for feedback, could save a company much embarrassment.

Marketing can include every aspect of a business, especially when it comes to the entertainment industry.

When a studio discusses their success stories, as well as what could have been, they’re mostly sharing their thoughts and decisions from the past, and though hindsight is 20/20 there some examples where a missed opportunity is laughable nowadays.

The story goes that in 1998 Sony sent an offer to Marvel to acquire the film rights to Spider-Man, which resulted in their creation of the Raimi Spider-Man trilogy and the subsequent Marc Webb Amazing Spider-Man films.

Yet, Marvel also offered some additional character rights to sweeten the deal. For a mere $25 million, Marvel offered Sony the rights to Iron Man, Thor, Ant-Man and Black Panther; four of their biggest heroes and Sony politely declined.

Now, considering that the first Iron Man movie alone made over $585 million and that Black Panther’s solo film is currently rated the 11th highest-grossing film of all time, its easy to see that Sony missed a golden opportunity here.

Perhaps before diving into the world of Instagram, Nestle should have shown their debut image to someone with the slightest bit of internet awareness.

Should they have done so, one of the younger members of their marketing team might have noticed a striking resemblance with their cheerful drummer and the stuff of kid’s nightmares.

Alas, no such foresight was to be seen within the walls of Nestle’s social media department when they published their very first image on Instagram; a joyful bear is rocking out on a drum kit, using Kit Kats instead of drum sticks.

Despite the good intentions and the light-hearted nature of the image, the internet quickly descended upon Nestle with mockery, thanks in no small part to an infamous meme icon known as ‘Pedobear’.

It doesn’t take a genius to ascertain what Pedobear represents, but being so closely tied to jailbait and paedophile jokes inevitably caused some embarrassment over at Nestle.

Our first example of how a video game company’s image and brand can be torn apart comes from a case that continues to worsen by the day; Bethesda’s handling of Fallout 76.

Before the game launched, there was a quiet murmuring of optimism surrounding the title; Bethesda was a well-respected, much-loved developer, so if anyone could branch out into online-only games it would be them, right?

Single-player Bethesda games are infamous for their many hilarious glitches upon release.

Yet, upon the time of writing, a full year after the initial release, Fallout 76 is still besieged with game-breaking, server crashing, balance ruining glitches, bugs and problems.

Where does the marketing come into this though? Well, it’s the way that Bethesda has handled the many, many, many complaints about the game.

Disaster after disaster has plagued Fallout 76; from the collector’s edition canvas bags being made of cheap nylon, to the novice ways the company has handled hackers.

Further onto how requesting support from the company led to everyone’s details being readily available to anyone online, and to the latest, grand insult.

Fallout 1st, a staggering $100 a year subscription service, has shown the market that Bethesda doesn’t care about fixing its many problems, and each of the previous marketing blunders has shown the Bethesda is no longer a company to trust, let alone love.

Every step of Fallout 76’s journey has been a guide of what not to do when releasing a product, with each blunder being funnier than the last.

At least, for those who bought it, you had to laugh, or you cried.

Onto a more light-hearted example of utterly bizarre branding is the perplexing case of how someone in Acclaim’s marketing department managed to hold down a job for so long.

Never content with conventional marketing, Acclaim had always aimed to grab attention in the most obtuse ways possible, including paying for speeding tickets and straight-up desecrating gravestones.

Still, these unorthodox methods aren’t the most baffling plans that Acclaim had hatched.

By quite some distance, one of the craziest ideas they were going to run with was for the release of Virtua Tennis 2, which entailed creating a public panic, a ridiculous amount of paint and, potentially, an unhealthy amount of animal abuse.

The plan was to get some coverage of the tennis based game at the world’s most famous tennis event, Wimbledon, yet their methods for doing so were anything but sane.

After months of training a flock of pigeons, Acclaim had hoped to paint the Virtua Tennis 2 logo directly onto pigeons and have them swarm Wimbledon during the championships.

You may also like:   Pop-Up Shops - What are the Pros and Cons of Pop-up Retail Spaces?

The fear of this threat had become so real that Wimbledon officials had even contemplated training hawks of their own to take down the pigeons, which not only would have been distracting but potentially more entertaining than the tennis itself; or for that matter, the actual game itself.

This final example from the video game industry is probably the most well-known and embarrassing case of hubris in the industry.

When a marketing campaign is calling its core demographic a ‘b*tch’, you know that it’s not destined for greatness.

This was a lesson that Ion Storm had to learn the hard way, especially as it continues to be a laughing point in video game advertising to this day.

After leaving id Software, the infamous developer behind well-known and gorey classics Doom and Quake, John Romero decided that his unparalleled genius could only be expressed by creating his masterpiece, Daikatana.

Surprisingly, it wasn’t the many delays that ruined this games marketing, nor was it the lack of any potential to accurately review the game, but the undeserved, smug confidence that Romero showboated that set the game up for failure.

Bus stops, billboards and magazines declared that Romero was going to make you, the potential player, his b*itch; focussing on the shock factor for marketing rather than, you know, the quality of the game itself.

This obnoxious marketing ploy provided the world with a good dose of schadenfreude, as the game was poorly reviewed across the board, with the adverts directly serving as salt on the wound.

At best, an idiotic misfire, at worse, an insulting reflection of civil rights; it’s easy to see why Kendell Jenner and Pepsi both backed away from this campaign quicker than a kid throwing Mentos into soda.

The advert for Pepsi was pulled within days of airing, not just due to the tsunami of ridicule it received but because of the implications that it was trying to profit from the hugely prominent ‘Black Lives Matter’ movement.

The ‘story’ of the advert/short film was confusing and stupid enough, with Jenner taking part in a photoshoot right next to a protest march, which oddly enough seems concerned about.

In a true testament to throwing off the shackles of society, Jenner tears the photoshoot wig off of her head and rubs off all of her special lipstick and makeup, though this shot loses any impact it was supposed to have when, predictably, Jenner still looks photoshoot ready after she joins the protest.

To elaborate on how the rest of the advert goes would be giving it too much time and credit, so it’s simpler to discuss the reaction it provoked; disgust, mockery, and a fair appraisal of Pepsi as being tone-deaf.

Indeed a lesson in knowing the tech you’re using when engaging in marketing, Oprah’s endorsement of the Microsoft Surface became more of a point of mockery than a glowing recommendation when the very approval itself inadvertently promoted a competing product; the iPad.

You may also like:   20 Hidden Messages in Logos That Prove Companies Are Pretty Clever

Dubiously named one of Oprah’s ‘favourite things’, Oprah tweeted; “Gotta say love that SURFACE!” when the tweet itself broadcasted that it had been sent from her iPad.

Promotions for the Surface racked up $1.5 billion, which should have probably included some quality control when it came to how said promotions were shared.

This embarrassing twist for Microsoft taught the world that even one of America’s most beloved icons can slip up from time to time.

Another infamous example of how tweets can go viral for all the wrong reasons, US Airways responded to a customer complaint with a simple request for the afflicted customer to get in touch with an update to her troubled travels… Along with an incredibly NSFW image.

For reasons that should be obvious, said image won’t be shown here, yet it was essentially a picture of a woman with a toy plane inserted somewhere that, well, toy planes probably shouldn’t be inserted.

The tweet took a painfully slow hour to get rid of, but by then, the damage had been done, and Twitter swarmed on US Airways with confusion and mockery.

The official story was that the original image was tweeted at US Airways earlier that day and that, somehow, that led to the copy accidentally being pasted in a reply.

It should go without saying that this wasn’t a genuine, intended reply, but one has to wonder how such a mistake was made.

Honestly, it’s quite an achievement to create a mascot that’s creepier than a magical clown, and yet you’ve got to take your hat off (or your crown) to Burger King; they made The King.

Appropriately known as ‘Creepy King’, The King has been a part of Burger King’s branding for over half a century, starting as a humble king sitting upon a gigantic burger (or he’s a miniature monarch seated on a regular bun; strangely the lore has never been thoroughly explored) but twisted into his creepy form sometime in the early 00s.

As the focal point of an almost decade long marketing campaign, Creepy King was in the public eye for a while, yet some decisions made with this nightmare fueling icon were even more confusing than his mere presence.

These include the team-up with Blitz Games, who created video games for the Xbox and Xbox 360, titled Pocketbike Racer, Big Bumpin’ and Sneak King; this latter game gained some attention due to how utterly bizarre it was, but it was hardly a hit.

Hilariously enough, in 2011 the decision was made to retire The King as, and I quote, “he scared away women and children from the chain”.

Despite this damning statement, The King did return briefly in 2015 as part of Floyd Mayweather Jr’s entourage when he fought Manny Pacquiao.

Burger King paid $1 million for this collaboration but, honestly, I couldn’t imagine a better investment for Mayweather as the psychological damage inflicted on Pacquiao must have been beyond words.