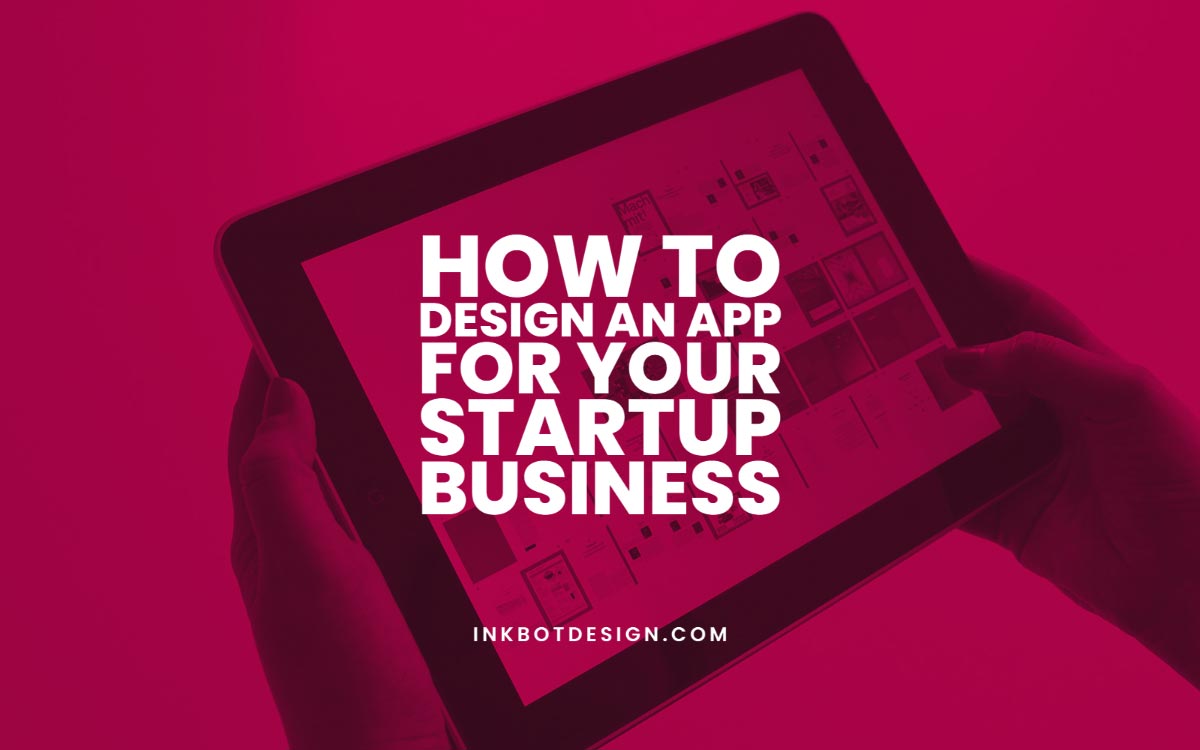 How to Design an App for Your Startup Business

So you have a million-dollar idea, you imagine making thousands of people happy, and there is only the most minor thing left – to design an app for your startup.

Ironically, this is the step where many projects get shut down. How do you avoid this?

Each of these points is a scenario that many projects end up following over and over again.

Every customer who ignores the following is very likely to end up with an analyst when they need to redo almost everything.

What will I learn? show
You don’t need a designer; you need THE designer.
Prepare brief terms of reference.
Just a good freelance designer or someone you know won’t do.
Don’t give your design to programmers.
Set an adequate budget for the MVP
Don’t design 2, 3, 5 prototype designs of the whole product
You will redesign your project 10 more times

You don’t need a designer; you need THE designer.

Usually, when people say “a designer”, they mean a graphic designer – a person who designs everything.

Sure, they have an idea of the interfaces, but this is often not enough to make something completely new from scratch – a product with no competitors on the market.

Often clients ask to “audit and redesign an application” because users didn’t understand how it worked. In such cases, you usually see the following under the hood: an excellent design with absolutely terrible usability.

Sometimes you have to spend hours and hours to figure out how the interaction in the app works.

And it’s not the designer’s fault – they don’t know how to do interfaces, but they try very hard to make it look nice.

In other words, a designer is like a seamstress in an atelier. They will sew you a beautiful suit that fits you well.

You may also like:   The Role and Importance of Communication in Marketing

So does the UI designer – they will draw what you tell them to draw.

Of course, they will do it with a style and beauty, but whether it will be convenient for users is a question.

The conclusion is that you need a UX specialist who deals specifically with usability – the convenience of the product for the end-user. What they will do:

Remember that 90-95% of UI/UX designers are UI designers. They are not UX specialists.

On the other hand, sometimes, a UX specialist may have nothing to do with design because UX designers are analysts first and foremost.

And the results of their work are not pictures but scenarios, revised terms of reference, audits, and prototypes.

And in this case, UX specialists work in collaboration with UI designers.

So, let’s say you’ve found a fantastic specialist. How do you get them on board to design an app for your startup idea?

To avoid wasting weeks of the UX designer’s not so cheap time understanding your wishes, prepare a description of the product.

At least a few lines for each feature:

Basic prototypes are very helpful as well. You can draw it in Miro, Paint, Figma, whatever you know how to use. At the very least, you can do it in your notebook or even on a napkin.

Even though prototypes will be significantly redesigned in most cases, at the start, they are beneficial – especially when you create something that has no analogs on the market or has unique features.

You may also like:   How to use Data Analytics to Improve User Experience

On substantial projects, it sometimes takes months to get dozens of stakeholders to tell you what they need for the job. To avoid delays, try to prepare as much information as possible before starting with the UX designer.

So, analytics is done, user flow is thought through, and a prototype is drawn. What’s next? Now we are looking for a UI designer.

Just a good freelance designer or someone you know won’t do.

Sad but true. And here is why.

Designers, like doctors, are all different. Everyone has his or her specialisation – web, graphics, applications, and so on.

There are dozens of designers’ specialisations, and probably you even have never heard about a lot of them.

Another example is “writers”. These days, there are many of them, and for most of us, the difference between “copywriter” and “content writer” isn’t apparent.

But it doesn’t mean that you have to hire some “generalist” because if a specialist does everything at once – most likely he or she won’t do anything at the top level.

In other words, hire a researcher if you need help writing a research paper, a speechwriter when you need a speech, and so on.

Of course, finding a single-skilled expert could be challenging, but the time wasted on research is usually compensated by much better results.

So if you want to design an app for your startup, you need to look specifically for an app designer.

A designer with any other specialisation has almost zero chance of making a user-friendly and suitable for further development app at the first time.

And here is why:

You may also like:   Hospital Branding Tips - a Healthcare Logo Design Guide

This leads us to the conclusion: look not only at the pretty pictures but at what the designer has worked on before.

If they can make an excellent presentation, it doesn’t mean that they have any experience in web design and vice versa.

And if you create a product from scratch, the designer must already have at least 2-3 projects in a similar area.

Also, you can often see a situation where the site was made by an acquaintance leaflet illustrator, who someone mistakenly called a professional designer… The result of this work is not difficult to imagine – you certainly have seen such sites. Don’t do that!

And most importantly – write it down on a piece of paper and hang it above your desk:

Don’t give your design to programmers.

Here is some personal experience from my friend.

Not so long ago, she was approached by a client who came up with an innovative food delivery app.

The idea was exciting and had many potentials, but she couldn’t understand the idea’s implementation even on the second try.

At the same time, the client already had a ready-made app in his hands, which she could put on the App Store tomorrow.

After auditing the app and interviewing the client and his programmers, it became clear: the client came to the programmers with terms of reference that allowed some discrepancies.

It is understandable because a person who is not related to the development can not make the terms of reference ideally at once. The programmers (a well-known studio, actually) said: “Okay!” and started to work.

In the process, they didn’t study existing food ordering patterns, didn’t look at the competitors, and didn’t think through user paths.

As a result, they created an app that was utterly inconvenient to use. Functionality was hidden behind multiple drop-down buttons and menus; some of the functions were duplicated in different places for some reasons.

The user has two roles, but the second role was not noticeable. And even if the user accidentally stumbled upon it – he or she would not understand what was going on here.

The client paid about 10-12% of the application development cost for the audit and new prototype.

And now, he has to spend another month or two and pay programmers an extra +50% of the budget to redesign the service to a state where you can use it.

In conclusion: it is better to create the framework (prototypes) and user paths of the application first than to make something by programmers and then realise that at least 50% must be redesigned.

And it’s not the programmers’ fault for what they did; they were trying to do the best they could.

However, the best as they understand it often does not coincide with the target audience’s opinion – and you need to keep it in mind.

A little bit about finances:

Set an adequate budget for the MVP

It’s also not uncommon to see situations where clients come to you with unrealistic budgets.

And just as often, unfortunately, many of them want to create something impossible for $1000 (if not less).

Another part of clients are willing to give larger budgets but don’t have an exact vision of the end product.

They want you to do “something” for them (and when you do, it turns out that your “something” is not what they wanted at the very beginning). Both approaches are fundamentally wrong.

When it comes to the development of startups, not many professionals will agree to work under a scheme with a rigidly fixed budget.

The most optimal scheme, both for the client and specialists, is payment for time spent.

It guarantees the customer that the contractor won’t try to “squeeze” his project into the set hours, negatively affecting the quality.

And for the contractor, it is an opportunity to do the best they can, without looking back on the need to fit a small budget.

You may also like:   Graphic Design for Print Design Vs Web Design - Differences

To answer your unasked question: a contractor with a reputation will not cheat with their working hours.

If you do not trust the contractor, many solutions could help you control them.

And to the same point:

They say, how else can you evaluate a designer’s creativity if you only have one version on hand?

So here it goes: you don’t need variants to make one thing excellent.

There can’t be variants in UX design – you have to make high-quality prototypes only once, using all your experience, analytics of competitors and pseudo-competitors. And then, based on testing, refine it until it becomes perfect.

And if you still need design options – having a prototype and User Flow in hand, you can always go to any marketplace and announce a tender for 3-4 main pages of the product.

So you get the necessary number of design options and the opportunity to choose. This may not be the best solution, but you will have an abundance of options.

And please accept this as a fact:

You will redesign your project 10 more times

Remember: Done is better than perfect.

In practice, in the first months of diligent work, the application undergoes serious revisions, sometimes with a complete change in the financial model, significant modifications in functionality, and so on.

Do you develop MVPs? Develop the MVP.

What’s the point of investing 50 hours in designing and developing a personal account, a subscription-based payment model, if the whole model will change in a month?

Simplify, use the help of the right experts, test your ideas, and then you’re more likely to succeed when you design an app for your startup.

Author Bio: Taylor Brouwer is a passionate writer who loves exploring new topics and explaining something complicated in simple phrases. I used to work as a copywriter at an IT company. Currently works as a content writer at Writemyessay.nyc.