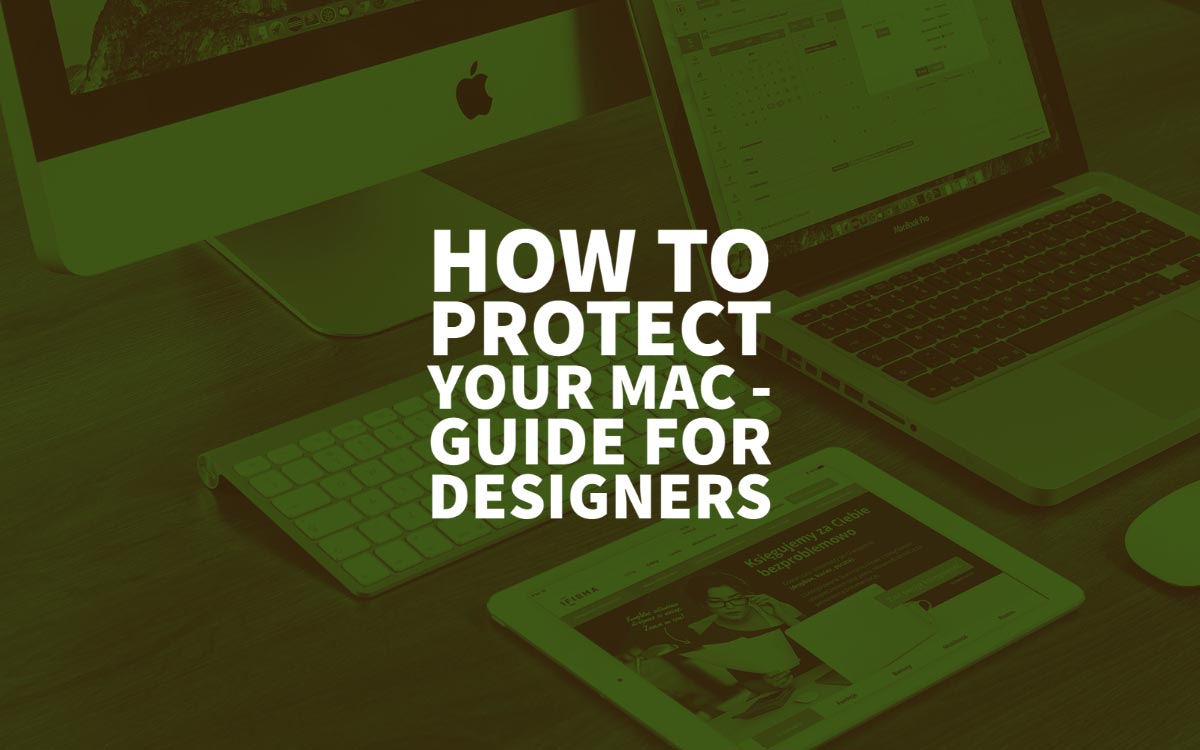 How to Protect Your Mac – Guide for Designers

Many creatives use Mac devices and have all heard that Mac computers are very secure.

Well, that’s not surprising since Apple used to market their computers as malware-safe.

Nevertheless, Apple dumped the “we don’t get viruses” rant eight years ago.

Thus, you can consider this as an admission that they do get viruses now.

The amount of malicious software aimed at Mac’s doubled compared to the previous year.

Cybercriminals are beginning to direct their sights on Mac devices.

Nevertheless, to defend yourself from these attacks, you can know the threat, be prepared, or check out a tool like this.

What will I learn? show
How to Protect your Mac – Risks for designers, freelancers, and businesses
Use of free tools by designers
Phishing
Ransomware
Actions to Protect your Mac
Install an Antivirus package
Make use of a Privacy-first browser
Virtual Private Network
Utilising a Password manager
Making use of multi-factor authentication
Regularly back up your files
Constantly update your Operating system and your apps
Frequently Asked Questions
How much time do I need to update my Mac?
How does a VPN protect your Mac?

How to Protect your Mac – Risks for designers, freelancers, and businesses

There are a lot of ongoing threats to designers and creatives using Macs.

They refer to phishing attempts, fake malware, and adware.

Moreover, many of them appear as users’ fault.

Use of free tools by designers

Some of the malware can infect your Computers via fake software.

If you are in the habit of downloading free software and tools from torrent websites, you might end up installing some malware as well.

While some of these malware pieces might redirect searches in your web browser to get illicit affiliate earnings, some can be damaging.

You may also like:   Top 10 Best Smartwatch Apps for Designers

You should ensure that you only use licensed software if your budget allows.

While technically phishing attacks are not new, they might pose a more significant risk to Apple owners than other platforms.

The reason is that the Apple environment is generally regarded as safe.

Designers using Macs could, therefore, be a little less careful when they face fraud schemes.

The most common phishing attempts aimed at stealing Apple credentials include the following :

As a Mac owner, you are likely to consider if you should be taking any steps to defend yourself from ransomware attacks.

Well, the answer is yes, you should.

As per a recent article in the Architects Journal, a UK-based architectural firm known as Zaha Hadid Architects ( ZHA ) encountered a ransomware attack in April 2020.

The attack disturbed the firm’s remote operations for its 348 London-based workers operating from home.

The firm found notifications on its server, informing them that their information had been hacked and encrypted.

The cybercriminal intended to demand a ransom settlement if the information was to be given back.

Fortunately, the blow did not cause any severe problems. According to the firm, no sensitive data was stolen, and they also had a backup, which they used to restore their information.

Actions to Protect your Mac

Making sure all the information on your computer is secure is crucial now more than ever.

Many unscrupulous individuals have been attacking designers, freelancers, and businesses using Apple computers.

However, taking simple steps like those outlined in this brief can go a long way in securing your data.

Below are some steps you can take to protect your Mac.

Installing the right antivirus solution is a crucial step toward securing your Mac.

You don’t want your latest Mac rendered useless by a cyber attack.

Fortunately, you can find several antivirus solutions that are good at protecting Mac computers.

You should note, however, that not all antivirus software out there is well suited for a Mac computer.

The Operating System that runs these computers is based on Unix, which is sandboxed.

Sandbox is an access control feature enforced at the kernel level.

The purpose of it is to control damage to the system and data if the computer becomes compromised.

This means that every App installed on the Mac must adopt App Sandbox.

When you pick your antivirus solution, you should ensure that it has some of the following features.

Make use of a Privacy-first browser

The internet is where most threats are lurking.

You should therefore ensure that whenever your browser, your privacy, and data are secure.

Unfortunately, Apple’s Safari isn’t much of a contender when it comes to online security and safety.

It is wise to find a specifically built browser with privacy in mind.

Such browsers come with built-in tools that guard your Mac and guarantee that sites are not tracking your browsing patterns or IP address.

Most also bar unscrupulous scripts hidden in scam websites that can infect your Mac without your knowledge.

The purpose of a VPN is to mask your IP address and make it seem like you are browsing from a completely different location.

You may also like:   Why Digital Watermarks are the Best Way to Stop Piracy

The result is that cybercriminals can not find your identity, so you will not be targeted.

Some VPNs have powers to encipher your browsing actions, so even if someone spies on you, they will not be able to find out what you are up to.

While getting a standalone VPN app is possible, many antivirus packages come with cutting-edge VPNs in their Mac antimalware packages.

As a designer or freelancer, you probably have many passwords for different applications and all your devices.

Having a solid password is a no-brainer; it is the first layer of security against cyberattacks.

A password manager can securely save all your passwords for social media accounts and banking portals in one place.

A good one can also serve as a cutting-edge encryption tool that instantly generates new and secure passcodes each time you log in.

It encrypts all your password data with “military-grade encryption.”

While it is a powerful tool, this password manager is only limited to Apple products and apps.

This means it doesn’t work with a third-party browser. Also, it cannot warn you if any of your passwords becomes compromised somehow.

This means that you won’t have the upper hand in countering cyber-attacks.

A better alternative would be to use a third-party password manager that traverses several apps and devices.

There are several online, and you just have to search and read reviews to find the best one.

Making use of multi-factor authentication

Most people already make use of two-factor authentication.

This is when you are prompted to enter a random one-time passcode with your regular passcode each time you log in.

This mechanism provides an added security layer by blocking even the hackers who would have somehow figured out your passcodes.

When they enter the regular passcodes, they will be prompted to enter an OTP or another passcode, which would add security to their device and accounts.

Regularly back up your files

Performing a regular backup of all your files is another vital step in securing your device and data.

Doing so ensures that you always have another copy of your files, even if a ransomware attack is carried out successfully.

Apple has a Time Machine feature that allows you to do this easily.

Furthermore, you can perform the backup on multiple, even external disks.

While a Time Machine alone can be a helpful tool, it is also recommended to use it with another backup tool just to be extra safe.

Constantly update your Operating system and your apps

Probably the quickest and cost-free method to protect your Mac, keeping your programs updated can go a long way in wading off cyber criminals.

Most malware is built to target and attack outdated systems because Cyber Criminals will be well aware of the weak points.

However, developers patch up these weak points as they release more updated software versions.

You are, therefore, safer if your OS and App are always up to date.

Updating your MacOS is relatively straightforward.

A few clicks will do the trick.

From the top left of your screen, click about Mac, then Software update.

You can follow the easy installation instructions you will be presented with.

The safer option would be to set up automatic updates to protect your Mac.

Updating other software besides the operating system is relatively easy as well.

In the App Store tab, check the option for automatic updates so that the computer can regularly look for and install updates on its own.

How much time do I need to update my Mac?

Sometimes updating a Mac can consume up to 16 hours or more. If you don’t want this to affect your workflow, you can make it a habit to leave the computer overnight to finish the job independently.

You may also like:   Top 9 Best Web Design Project Management Tools for Designers

How does a VPN protect your Mac?

A VPN for Mac secures your data as you surf the internet. While Macs have a reputation for being secure within the Mac environment, your internet activity on external networks can still pose a significant risk.