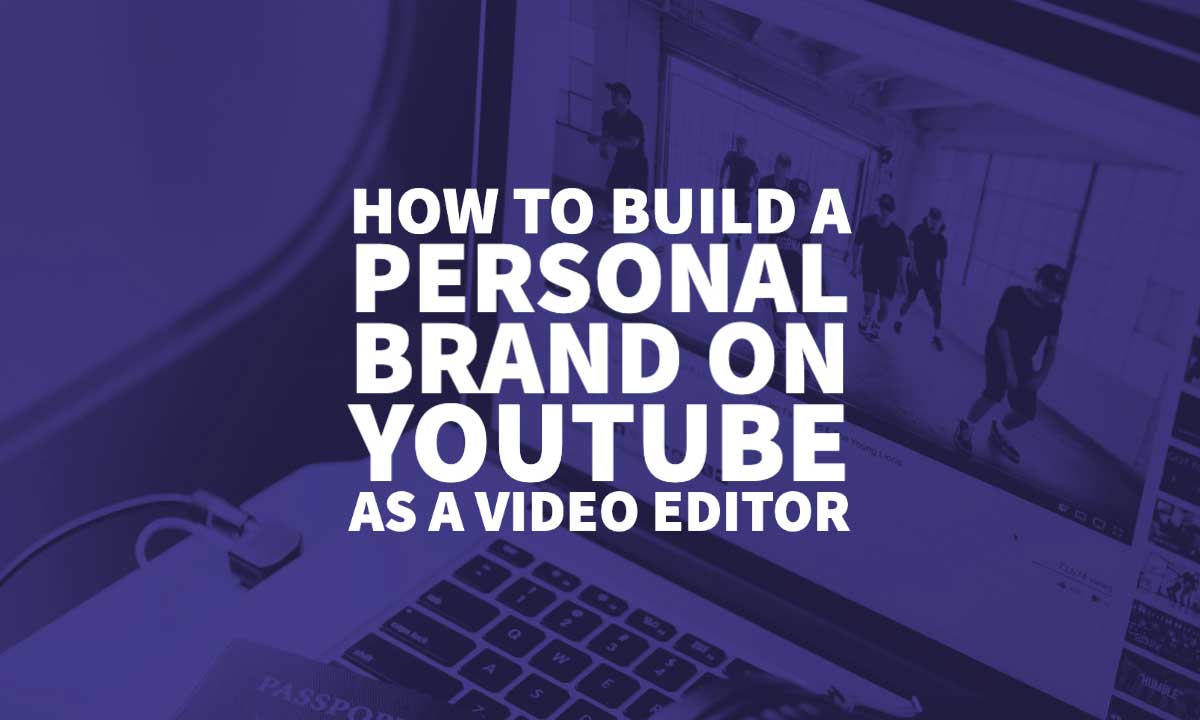 YouTube is all the rage nowadays. Every business, every brand, no matter how big or small, wants to be on YouTube.

And you as a personal brand, a freelancer or small biz, you should be on YouTube too. That’s where your audience is.

So how do you get started with video marketing? How does one make it on YouTube? Is the platform already too crowded or there’s still room to grow as a newbie YouTuber?

Read on and let’s find out how to build a personal brand on YouTube.

Do something you love

I know this sounds like a cliché, but I cannot emphasise it enough.

I am talking hours and hours each day for months or even years before you start to see some traction on YouTube.

So, as a video editor, you might be into creating short films or doing wedding videos or music videos, or just passionate about gear.

Make videos on what you are passionate about – if wedding videos are your thing, do that.

Doing videos on something that you love will help a lot with your consistency because it will not feel like real work.

When you’re passionate about something, you are very likely to stick with it even when the outcome is not what you expected.

So, don’t go with something that you think will make you more money, get you the most exposure or the most revenue.

Instead, go with something that you love doing. Eventually, you will have to think about monetisation too, but that should not be your primary goal.

When your profession is your passion, you are in the sweet spot, the perfect scenario, and you are more likely to succeed.

The power of suggested videos

If you already have a YouTube channel and ever took a closer look to your YouTube Analytics page, you noticed that most of your views would come from suggested or recommended videos.

Not from actual search queries.

So, if you can get your video to appear as a suggested video, you can reach thousands and thousands of views, just like that.

From my personal experience after working with tens of content creators through my video editing company – Veedyou.com, I learned that the best way to get your videos featured in the suggested section is to simply make a video on the same topic as a viral video in your niche.

Simply head over to the channel of one of your competitors, see which videos have the most views and create a better video around one of those topics.

This should increase the chances of your video appearing as a suggested watch for your competitors’ popular video.

It’s no secret that YouTube is trying to keep users on their platform for as long as possible.

They said it themselves in the Deep Neural Networks for YouTube Recommendations they published a while back.

Videos with high watch time will get pushed more by the YouTube algorithm. But what can you do to increase the watch time of your videos?

First and foremost, make sure your intro is on point.

Make it short (no more than 15 seconds) and intriguing.

The intro should make the views wonder what you have to say next and keep them watching.

If you lose them in the first 15 seconds it’s terrible, so put in the time to make that intro very, very engaging.

Again, after working on editing the videos for many clients, I found that creating a short intro made out of the best, most exciting bits and snippets of your full video works great. So that’s an idea for you to try out.

Another thing that helps is the length of your video.

In general, longer videos will crush shorter videos. By longer, we understand anything that’s over 10 minutes or so.

Eventually, you would want to turn at least a tiny percentage of your viewers into clients.

Therefore, you should create videos that show what you are good at. Maybe you are very good at colour grading videos, or perhaps you are good at creating a video script which tells a beautiful story.

Create a video in which you walk people throughout your process. You can show them how you’re filming your b-roll sequence or how you edit videos for Instagram, or whatever it is that you’re doing as a video editor.

Maybe have some client work that you did in the past featured on your videos.

Anyway, these should be more like how-to videos, not hard-sell videos. Potential clients will reach out to you eventually even without you trying to make a sale on the video.

Collab with YouTubers in your niche

One great way to build a personal brand on YouTube, especially when you are just starting is to partner up with other channels in your niche.

This will give you a little bit of momentum, and it will help you get traction faster in your early stages as a YouTuber.

So, try to reach out to a handful of people that you look up to and ask them to be featured in one of your videos, or vice-versa.

Be careful though, only reach out to channels that are roughly of the same size as yours.

If there’s a big gap regarding subscribers or view count, the collab doesn’t make sense as the benefit will not be the same for each.

There is no doubt that video editing is a creative profession.

The cool thing about being creative is that there’s no set rule. You can do anything you want as long as it looks good to you. Here’s the perfect example.

A while back, This Guy Edits (you should follow him on YouTube if you’re not already) hosted a competition where he asked video editors to cut a scene from the film ‘The Ever After’.

Everybody was provided with the same footage, but the outcome was so different because everybody was its own creative vision — their own style of editing.

And that’s what you should do too.

Don’t try to copy other editors, do your own thing.

Sure, it’s okay to have people that you look up to and that inspire you. But try to find your own kind of personal touch or style.

And your YouTube videos should reflect your own style and personality.

That’s how you can connect with your audience, and that’s how your viewers can relate to you.

Just as in many other niches, in the video editing vertical how-to videos tend to do great.

Video editing is indeed a creative process like I mentioned above, but it is also a profession that requires a few technical skills and knowledge too.

You need to know how the software works.

How to add effects, transitions, J-cuts, L-cuts, stabilise shaky footage, remove green screens, colour grade… and the list could go on and on and on.

There are so many technicalities about editing video.

So, creating educational videos in which you teach people how to do specific things inside a video editing software such as Premiere Pro, Final Cut or DaVinci Resolve is not a bad idea at all.

Gear review videos would fall under this category as well.

Filmmaking goes hand in hand with video editing, so if you are into videography, why no review your camera, lenses or any other piece of equipment you own?

The title of your video and the thumbnail image are probably as important (if not more important) as the content.

If people are not clicking on your videos, the YouTube algorithm will not continue to recommend them to new people.

Titles and thumbnails should be intriguing.

When someone sees a good title or a good thumbnail, they should be asking themselves – hey, what’s going on in this video – and they should be super tempted to click and watch your video.

I want to say you should make them almost clickbait-ish, but not in a bad away.

I mean don’t lie in your titles, but try to make them as intriguing as possible.

So definitely invest some time into creating a thumbnail image that looks good. There are tons of apps that let you design one from scratch.

If you lack inspiration, just head over to some of the prominent YouTubers and have a look around for examples. They do an outstanding job at it.

That’s pretty much it from my end in a nutshell.

Try to implement at least a couple of these tips, and I’m confident that your YouTube channel will get traction.

Do what you love, build a personal brand on YouTube, stick with it and keep uploading.

Author Bio: Cristian is a freelance video editor working with videographers, marketing agencies and video production studios all over the world. You can catch up with him on his blog or LinkedIn.