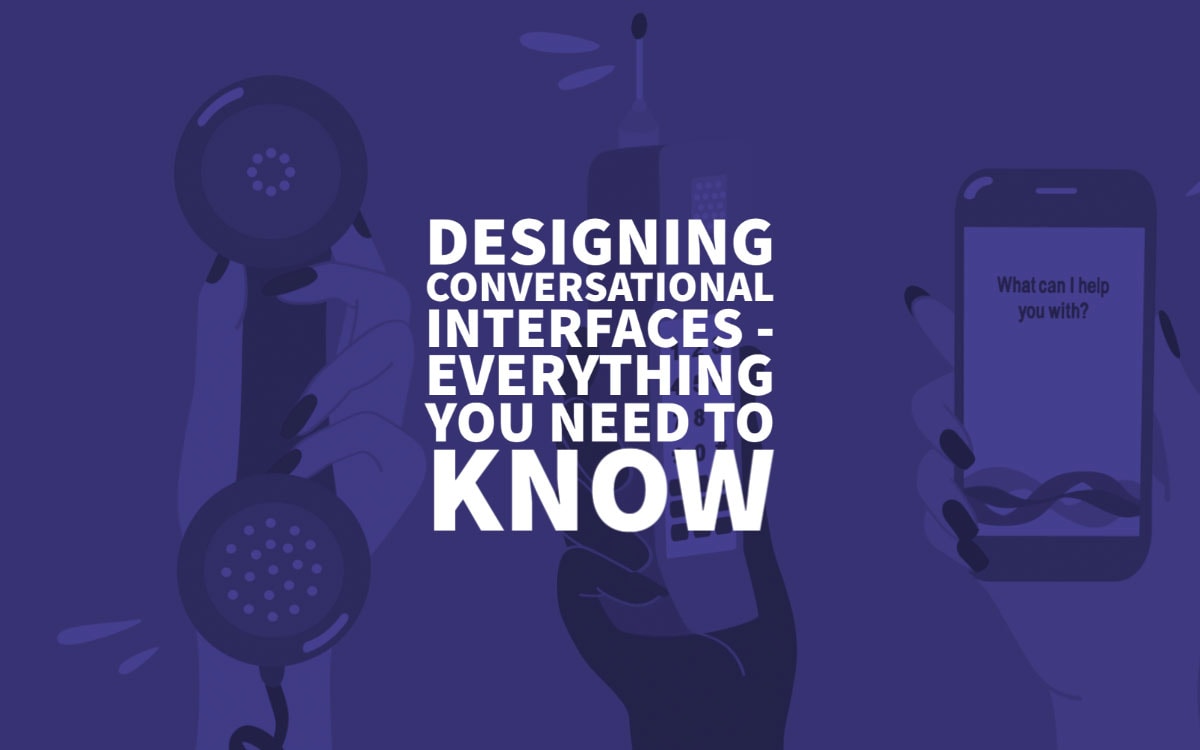 Designing Conversational Interfaces – Everything You Need To Know

Today, maintaining a close and personal relationship with your customers is essential for running a successful business.

After all, if you’re not online and fail to connect with your target audience, your business becomes almost invisible.

And with the rising need to help consumers with simple and easy communication, companies have to keep up with technology and make the most out of it.

The increasing popularity of AI in customer service and support has allowed businesses to make the best of so-called conversational interfaces.

These days, it’s all about personalisation and customised customer experience, and there’s no better way to go about it than to learn everything you need to know about designing conversational interfaces.

What will I learn? show
What is a Conversational Interface?
How Does a Conversational UI Work?
Types of Conversational UI
Q&A Web Chat Interface
Customer Support Interface
User Engagement Interface
Organiser Interface
Multi-Purpose Intelligent Virtual Assistant AKA AI Assistant
Tips for Designing Conversation Interfaces
Visual Appeal Is Not a Priority
Design a Purposeful Bot
Bot Needs a Consistent Personality
Give users an Exit Option
Be Transparent with Your Customers
Be Short and Sweet
Keep the Conversation Animated
Avoid False Options
Include Straightforward Commands
Improve Command Understanding
Use a Natural Message Arrangement
The Basic Conversational UI Principles

What is a Conversational Interface?

It means having a chatbot that engages in conversation with existing and potential customers so that they can quickly get the answers they need; no waiting or having to visit the company’s actual website to look for the information they need.

Thanks to Natural Language Processing (NLP) support, these AI-powered chatbots use and recognise the conversational language, making the whole interaction between the users and bots smooth and natural.

How Does a Conversational UI Work?

Natural Language Processing pairs with the typical machine learning algorithms to create a human-like design of the conversational UI with a consistent improvement of both the input and output.

That said, the entire operation uses:

The more we use the conversational interface, the more data it collects, which consistently makes it better.

In the end, all that’s necessary is for the user to type out their question or inquiry and they’ll instantly get a response.

Essentially, conversational UI is a modern technology that companies can use as virtual assistants, also known as chatbots, to do certain things as part of their routine or upon request to further develop and establish their brand.

There are many different types of conversational interfaces that are used for various purposes.

For example, chatbots are often seen as conversational interfaces, but that conversation UI is just an umbrella term for many different platforms that use this technology.

This is the most basic type of conversational interface.

It’s simple as it delivers the valuable info straight from a specific data source (often from FAQ) and doesn’t rely on either NLP or machine learning.

The customer Support interface is unsurprisingly the most common type of conversational UI today.

It gives the users general information in a more coherent way; yet, if the bot fails to provide the right response/action, it transfers the user to an actual human agent.

Fortunately, plenty of premade chatbot templates for the customer support interface allow a much faster and more comfortable design creation.

It gives the user the necessary help to browse the website and get more comprehensive answers, especially when it comes to product/content recommendations.

Making the most out of these features can end up generating more leads in the long run.

Essentially, an organiser interface works as an integrating bot that helps users keep track of their schedules, to-do lists, and other important information.

In that sense, all you need is just one app!

You’ve probably heard about the Internet of Things, and it’s this multi-purpose intelligent virtual assistant that’s one of the most ground-breaking solutions.

Chances are you’re already using some of them; think about Siri, Alexa, or Microsoft’s Cortana for example.

Once you decide what type of conversational UI you need, you can use different tools to create it.

Popular platforms for this are Chatfuel, Botsify, Sequel, and Hubspot Free Chatbot Software.

But regardless of what platform you decide to go with, you can use these actionable tips to add a chatbot to the website with efficient, conversational UI.

Visual Appeal Is Not a Priority

When designing conversational interfaces, it can be tempting to focus too much on the visual aspect.

However, the way the bot looks has no real value for neither the company nor the users.

In general, conversational interfaces should be minimalistic, simple, straightforward, and intuitive to serve their purpose.

That’s why the design focus should be 100% on the conversation flow.

If you do want to add a patterned background to your interface for some personality, choose one that’s not too distracting from the actual conversation.

You have a specific target audience, with particular problems and queries.

That’s why you need to create clear response goals for your bot.

You have to keep your audience in mind, so your conversational UI is as user-oriented as possible.

The bot may be great at helping users find the right size and material, but don’t expect it to discuss the latest fitness trends with them.

Chatting with a bot will never be the same as chatting with an actual person, but your goal is to make this interaction as human-like as possible.

That’s why your bot needs a consistent personality and tone of voice that’ll reflect your brand.

By creating a detailed brand style guide, you can make sure your voice tone is consistent across different channels.

Give users an Exit Option

Regardless of whether they’ve got the info they need from the chatbot, or they need to speak to an actual agent about it, your customers must have an exit option.

That way, they won’t get confused about the next steps to take as the solution will be right in front of them.

Of course, to manage all the support options, including the real-life ones, investing in an effective CRM system can make a world of difference.

Be Transparent with Your Customers

Amazingly enough, the majority of users won’t notice that they’re conversing with a bot.

However, this doesn’t mean you shouldn’t tell them.

It’s essential to be open and direct about whom the customers are talking to, especially when you offer combined support with both a bot and a human agent.

This simple thing will help you build even more rapport and get your business flying.

Be Short and Sweet

You may think that designing a conversational UI that delivers chunks of text and detailed answers is a good move for your business. The reality is: that it’s not.

If they’re using a chatbot to get information about your company and products/services, you should know that your customers also want a quick answer.

Focus on creating a bot that gives short and sweet answers, without all the unnecessary fluff.

Just because you don’t have to focus too much on your bot’s visual appeal, that doesn’t mean that you shouldn’t create a natural conversation flow.

It’s a good idea to design an animated avatar that’ll humanise your bot and better immerse the conversation users.

Of course, don’t hesitate to use non-verbal elements like GIFs and emojis to keep the conversation more enjoyable and your customers more engaged.

Giving the users false options while chatting with a bot can only leave them annoyed.

If they can’t get a meaningful response to their query without a false promise, they’re more likely to leave the convo.

Such an example is the notorious command “more”.

Because it can’t fully understand what the customers are saying, the bot may give some answers and encourage them to type “more” if they haven’t learned what they needed.

Often, the bot won’t be able to answer with more information to this command.

This is a false option that could end up disengaging the users.

If the bot needs to relay a command to the user for specific functionality, make sure that the wording is simple.

There’s no reason to have several different command options if the functionality is pretty much the same.

For example, if the user can save their product suggestions, the bot can command “save”.

Instead of programming the bot with just a couple of input commands and leaving the rest to “Sorry, I don’t understand”, include several strategies in the design.

That said, have your bot account for common command typos as well as synonyms.

Use a Natural Message Arrangement

The best option is to have the bot’s and users’ avatars opposite of each other.

To sum it up: every successful conversational interface needs to operate on four basic principles: clarity, character, compassion, and correction.

When it comes to decision-making, people are typically guided by two systems: more intuitive, emotional, and logical and analytical.

To design the most effective conversational UI, it’s essential to keep the users within the emotional system.

Thanks to the intuitiveness and convenience of this setup, users find it easier to make a decision.

Users don’t mind talking to a bot, but they do mind when they’re talking to is evidently software.

This is precisely why we focus on the “human-like” concept of interaction so much; users will generally enjoy their chat with the bot more if it feels like they’re chatting with an actual human.

Make sure that the bot’s personality is fun and engaging while representing your brand.

It’s a must that the bot can show compassion when needed.

This doesn’t mean that the software should register sad personal stories.

However, it should give output with potential risks and warnings if these are applicable in this situation.

For example, telling the users about potential shipping delays is something an actual customer service agent would do, and, therefore, the bot should do the same.

Designing a tremendous conversational UI doesn’t mean that the bot will answer every single question every time.

However, it does mean that the bot should find a way to respond, allowing the conversation to continue.

Avoid response repetition (mentioned false options) as this can quickly turn into a conversational dead end.

The bot can be programmed to continually find a way to correct itself and offer forwarding responses.

The whole point of a conversational user interface is to speed up the communication between the companies and their customers while making the overall user experience the best it can be.

That’s why skip the flashy visuals and overly complex sentences.

The best responses will come from using bots to carry real-life conversation flow and bring your brand closer to your audience.

Author Bio: Bojana is a content strategist with a finger on the pulse of the world of eCommerce marketing. She oversees a content creation strategy that helps business owners take their brands to the next level.