9 Psychological Traps That Are Ruining Your Design Creativity Right Now 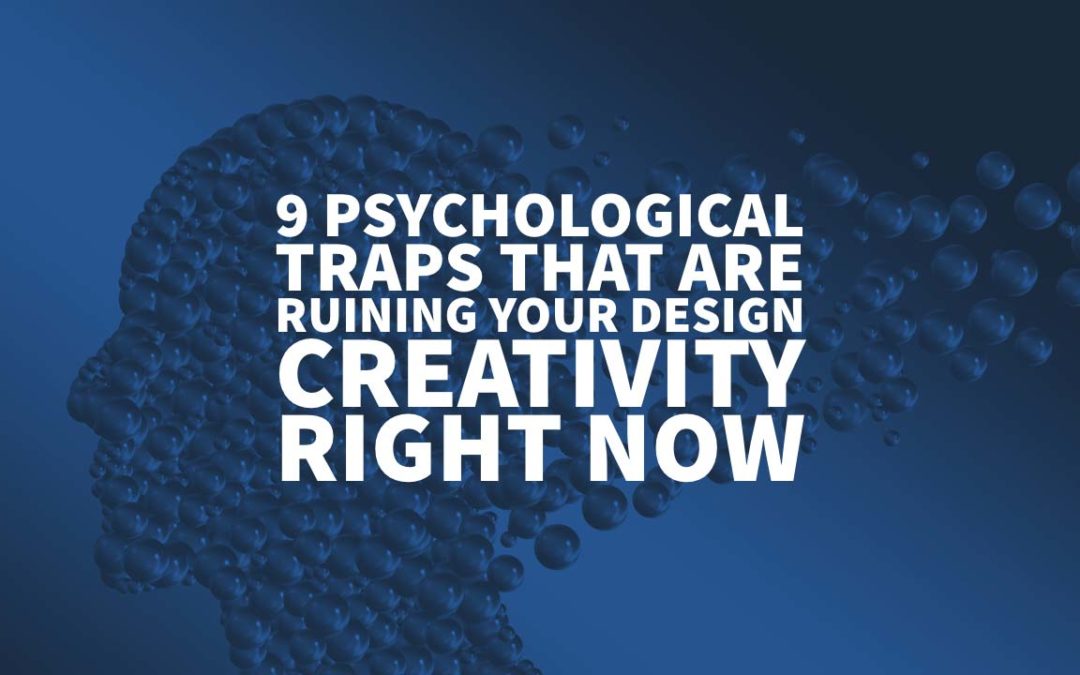 What will I learn? show
The Boiling Frog Syndrome
The Conservative Mind
The Ostrich Effect
The Bias Blind Spot
The Availability Heuristic
The Dunning-Kruger Effect
The Zero-Risk Bias
The Crab Bucket Effect
The Dr Fox Effect

9 Psychological Traps That Are Ruining Your Design Creativity Right Now

Designers are creative, and they believe their masterpieces are the result of decisions they make while working on projects.

But they are wrong.

Instead, it deforms the sense of reality, influencing self-perception, lifestyle, and professional achievements.

Understanding the psychology behind everyday actions is the first step toward stellar emotional intelligence, which determines creativity level even more than hard skills a designer has in the niche.

When you realise how many ways human minds travel to operate subconsciously, you get a powerful weapon to control your life and work.

It's named after the real-life experiment:

This experiment hypothesises that the frog doesn't even realise it's boiling to death because the change in temperature is gradual.

This effect's results have become an excellent metaphor for how some designers organise work.

When getting into a mess, they prefer patience and humbleness to immediate changes.

They don't unleash creativity, submitting others' edits on their works, and don't even notice what emotionally exhausted they become.

To defeat this syndrome, creatives shouldn't close eyes to anything that smells wrong.

When stuck, they shouldn't hesitate to turn to corresponding design templating platforms to overcome that block and create customised content for their brands.

Even if unsure what to do, they need to talk to other boiling frogs in the pot and never ignore any little inconveniences, as they can ruin creative design works slowly but steadily.

It's difficult for them to say goodbye to out-of-date information and feelings that lose the edge.

If a designer is that kind of individuals, their creative work is at risk: unwilling to meet new trends and move with the times, this person will trail far behind.

This effect is about ignoring negative information when his creative work declines or when he disagrees with co-workers, such a designer doesn't want to learn the details – like ostriches hiding heads in the sand.

Bill Kahn determines this effect as the hidden sequence of problems at work, and spells it out:

Designers are less likely to detect own bias than others', making the bias blind spot influence their decision-making, accuracy of evaluating, and ability to listen and learn from others.

They risk losing a reputation of smart, emotionally intelligent professionals.

Here go signs that you have a bias blind spot:

This effect doesn't influence IQ, self-presentation, and general personality traits; but it can prevent designers from making objective decisions and building healthy relations with others.

The availability heuristic is about overestimating the relevance of available data while making decisions.

For instance, a person checks many works of successful designers, and they make him believe in his designs to be successful, either.

Well, it's clear that creativity and success don't work like that.

Named after two professors at Cornell University, this effect occurs when we fail to assess our level of incompetence.

After designing one successful project, its author starts considering himself more creative and competent than everyone else.

Unable to critically analyse own performance, he overestimates his knowledge and calls the shots on more experienced colleagues without noticing own mistakes.

But the more competent we become, the closer is the impostor syndrome: it's when people underestimate their knowledge and skills, understanding they yet have much to learn about their subject.

To illustrate both sides of the coin, here go two common sayings:

Our brain is afraid of risks, perceiving them a threat to well-being.

That is why, when asked to choose between eliminating a tiny risk and reducing a huge one – big chances are we'll pick the first variant, even if it's counter-productive.

Known as a zero-risk bias, this psychological effect may thwart design progress, preventing the ability to assess the opportunities for professional growth critically.

It doesn't mean a designer should jump off the deep end.

Moreover, the principle of choosing the lesser of two evils can't go along with him all the time.

This bias force you to play safe, limiting your chances to scale the business.

It impacts every area of your life, blocks you from the abundant path, and caps your potential. (R.L. Adams best described and nailed the consequences in his article for Entrepreneur.)

How to reduce this bias?

Re-frame the problem and try thinking about the situation from a different perspective.

A savvy entrepreneur, you should learn to deal with the fear of failure as it can damage productivity, destroy dreams, and keep you from building a profitable business.

Follow the lead of Thomas Edison who said, “I failed my way to success.”

Did you hear of crab mentality?

Crabs in a bucket pull each other down from the walls to climb over the bucket rim and escape from it.

None of them succeeds.

This metaphor describes some designers' subconscious desire of not letting the others prosper because, if that's the case, they will stack up worse against those successful.

Like crabs in a bucket, they pull you down when you attempt to achieve something.

When meeting such “crabs” on the way to designing, don't let them convince you of your ideas insignificance.

This one is mind-numbing as it makes unreliable information attractive to people.

It happens when a designer blindly trusts his more successful colleagues because of their charisma rather than data or facts they share.

He starts implementing their theories to own designs, even if they are illogical and fact-falsified.

The Dr Fox effect is precisely what makes cults and pseudosciences so popular.

Who is Dr Fox?

Back in 1972, a group or researchers in medical education presented the paradigm of educational seduction at the 11th Annual Conference in Miami Beach, Florida.

Their experiment was to take an actor (Dr. Fox) who would give a lecture to experienced educators in order to prove the following hypothesis: an impressive lecture paradigm together with a stunning charisma of the speaker can seduce experts into feeling that they have learned something new from the lecturer despite meaningless and irrelevant content he conveyed.

Guess what? They were right!

Don't hurry up to trust ALL charismatic marketing gurus.

Don't hurry up to implement their theories to your business and life.

But when you shake free of their silver tongues and try to analyse their statements – you understand the absurdity of their “studies.”

The Dr Fox effect relates to survivorship bias, which is “the logical error of concentrating on the people or things that made it past some selection process and overlooking those that did not, typically because of their lack of visibility. This can lead to false conclusions in several different ways.”

Sol Orwell explains how gurus of all kinds take this bias to an extreme:

“Gurus have perfected the form of being a soothing balm – they placate your insecurities and make you feel better temporarily, but do nothing actually to help you.” So, “focus on the data, and make educated decisions from what the data tells you.”

After reading this article, can you call yourself a victim of those above destructive psychological effects?

What are your tactics to reduce them and develop better emotional intelligence and creativity for your design works success?

Author Bio: By Lesley Vos, a web writer and content strategist at Bid4Papers blog. She is a regular contributor to publications on business, lifestyle, and self-development, and you are welcome to see more works of Lesley on Twitter.