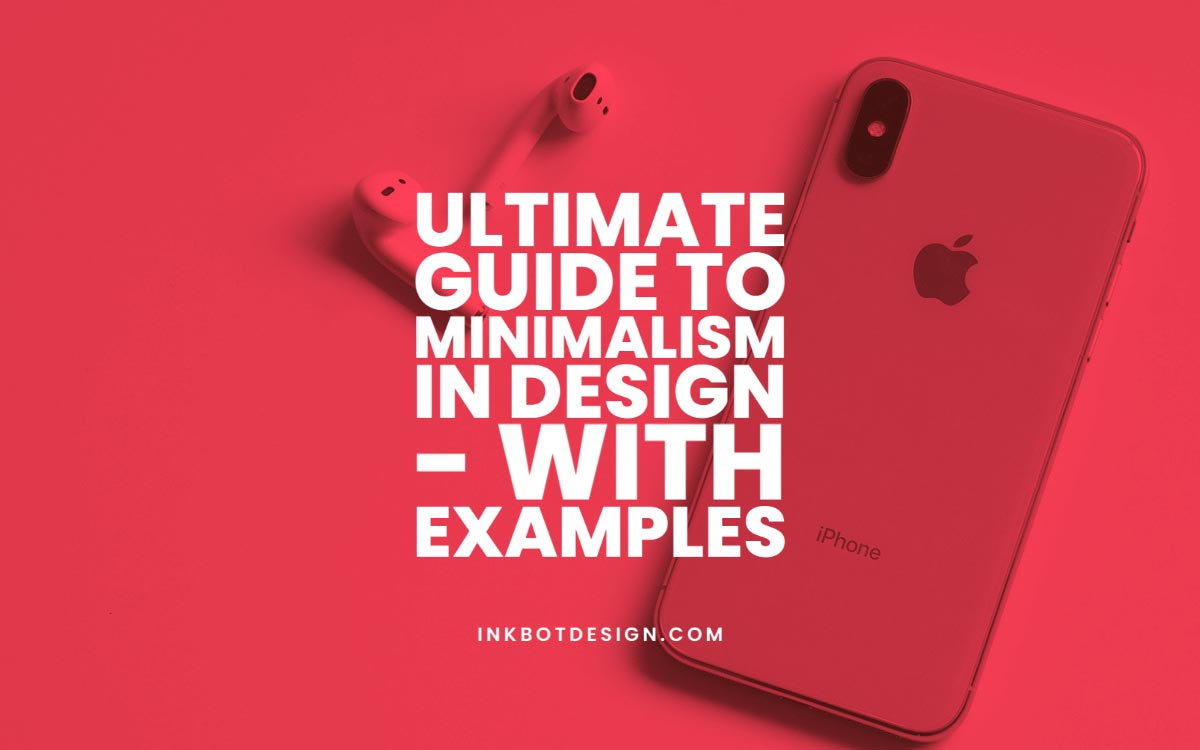 Ultimate Guide to Minimalism in Design – With Examples of Minimalist Designs

It was not so very long ago that minimalism in design was a fringe movement.

In fact, the term – which originated in 1965 – was used derisively by the British Philosopher Richard Wollheim when he critiqued a group of artists for their ‘minimal art content’.

That changed and in recent years minimalism in design has taken over not just in the artistic communities, but everywhere else as well.

Millennials use it to design their homes and web page designers use it to create their pages.

Some even go so far as to say that minimalism has evolved from a form of rebellion against the cluttered and gaudy styles of yesteryear.

Rather than a critique, it became a symbol for the everyday consumer; a luxury product.

As professor and critic Raskin says, ‘The richer you are, the less you have.’

The minimalist artist’s penchant for raw materials and almost brutal simplicity soon crept into the design and architecture world and quickly became more about conformity than revolution.

What is Minimalism in Design?

Minimalism in design is about bringing back design to its core.

Everything is about functionality.

You do not include elements that are not necessary.

This is extended to every aspect.

Not only are there no frivolous elements in the outlines, but the shapes and the forms, the typography and the colours are also similarly pared down and simplified.

Of course, there are some conflicting ideas in minimalism in design, as things can be minimalised in different ways.

You may also like:   Unique Branding Ideas to Boost Reputation

When you want to create minimalist typography are you:

1 – Trying to reduce the amount of ink you use?

2 – Use the simplest shapes you can?

You can have complex shapes that are very thin and therefore use very little ink.

Similarly, you can have simple shapes that are bolded and have thick lines, which uses far more ink but are still simplistic in design.

It is also here we find that there is no one form of minimalism, but many.

An essential aspect of minimalism in design is what is not there.

Non-designers often do not spend a great deal of time thinking about absence.

And yet, when you use very few lines and shapes, what you are not putting in becomes as important as what you are.

This is because these absences can both more easily be noticed by the viewer, as well as what the lack of things allows us to do – such as to emphasise and accent.

Consider this line of text.

In truth, you learned very little from the line in and of itself.

Moreover, yet, the chances are that subconsciously you paid more attention to it than the words you are reading now or read before.

This is because the line makes use of absence.

It is not, like the rest of this text, hemmed in with a paragraph.

Instead, it is surrounded by negative space.

This accents and emphasises it.

This is used to even stronger effect in design minimalism, with the absence around certain elements naturally drawing the eye to them.

You may also like:   Email Signatures: 6 Tips on How to Add an Effective Logo Design

There are many examples of negative space being used very effectively.

The power of minimalism in design lies in the nuance it allows.

This is down to our attention being a limited resource.

We only have so much of it at a given time and are only willing to devote so much time to our surroundings.

That means the more there is in our surroundings, the less attention each object receives.

Minimalism in design turns this around.

By giving us far less to pay attention to, what is there receives a far more significant share of our attention.

This means that minute differences occur to us far more quickly.

Does the grain of the wood run horizontally or vertically?

Do the pain brush strokes match or disagree as we move from one wall to the next?

Even such things as lighting suddenly become noteworthy and memorable, with the direction, angle and shading of the light suddenly becoming important, as these can often tell us as much about the intention of the artists as the object itself.

In fact, only with the arrival of design minimalism did the idea of separating space with light alone become relevant.

By changing the way two areas of space are lit, it suddenly becomes clear that the one is defined differently from the other and that the artist envisions their use differently.

Another area that has become even more vital as a result of the minimalist design is proportionality.

Again, because there is so much less to pay attention to in minimalism when the proportions do not match up correctly, this will immediately jump out at you.

This is true whether you are a designer or not.

You may also like:   What the Future Brings in 2020 to the Graphic Design Industry

For example, there is plenty of theorising that the golden mean might even have evolved into us to appear pleasing.

What this means is that when things do not follow this rule, we will notice and will find them less appealing – even though we might not know precisely why this is so.

Naturally, this is not the case with a more cluttered environment where a mistake might not be noticed as it fades into the many other elements which are already there.

Minimalism in Design is not for the faint of heart

What all this means is that design minimalism is not something that is simply done.

You need to study space, consider it and apply the principles of minimalism.

If you do not, if you simply go in and try stuff, then you will most likely end up disappointed by the end effect.

It will naturally not feel as cohesive and coherent as you meant it to.

This can often be because the proportions are not correct, the craftsmanship is not up to scratch, the lighting is off or because you combined the wrong elements in a way that is jarring.

For this reason – just like you need a professional writing service to create high-quality texts, minimalism in design requires specific professional expertise and an eye for design that most people struggle to bring to the table.

Perhaps this is why it is so beloved by the rich and the design crowd – as you have so little to work with, it is incredibly difficult to conceal when you do not know what you are doing or when you are using materials and craftsmanship which aren’t the best they can be.

This honesty, in turn, allows people to show off that they are – in fact – wealthy, without them needing to be ostentatious in their display.

You may also like:   Why Colour Schemes Matter in Design Psychology

Similarly, it allows those of good taste and breeding to distinguish themselves from the nouveau riche, whose money is not necessarily accompanied by the right eye to spot such details.

Currently, design minimalism is all the rage.

It is the predominant design in Silicon Valley and has also claimed the internet.

There are several reasons for this.

One of the big ones is that it is quite calming and makes it far easier for us to understand the functionality of the apps and tools we are using.

This makes it very inviting.

Based on this, you can be forgiven for thinking that we have reached the natural end of a progression and that this is it.

We have reached the natural conclusions for where we should end up.

To think that would be premature, however.

Because design is not just logical, it is also a response to the rest of society.

Design, like fashion, follows – as Malcolm Gladwell explains in his book ‘the tipping point‘ – certain waves.

Innovators try something new, which is then picked up by early adaptors, from where it then spreads across the rest of the population.

The moment this happens, however, the innovators and the early adaptors start to lose interest.

After all, the reason they picked up on this new trend was to define themselves as different.

The moment the majority then begins to adopt what they have discovered, they will, therefore, move on.

The warning signs are already out there.

There are plenty of articles with such titles as ‘minimalism is dead’.

It is not yet clear if these articles are premature – for as Mark Twain so famously quipped when reading his obituary in the paper ‘the stories of my death are greatly exaggerated.

However, at one point they will not be.

You may also like:   8 Cognitive Psychology Tricks for UX Design

Already there are plenty of artists, designers and architects looking at new ways to define themselves as different.

They are trying a lot of different paths.

It is pretty hard to know in advance which of these will end up the winner, but sooner or later one will be.

For the truth is easy enough to understand.

Right now minimalism in design is design – but in a while, it no longer will be.