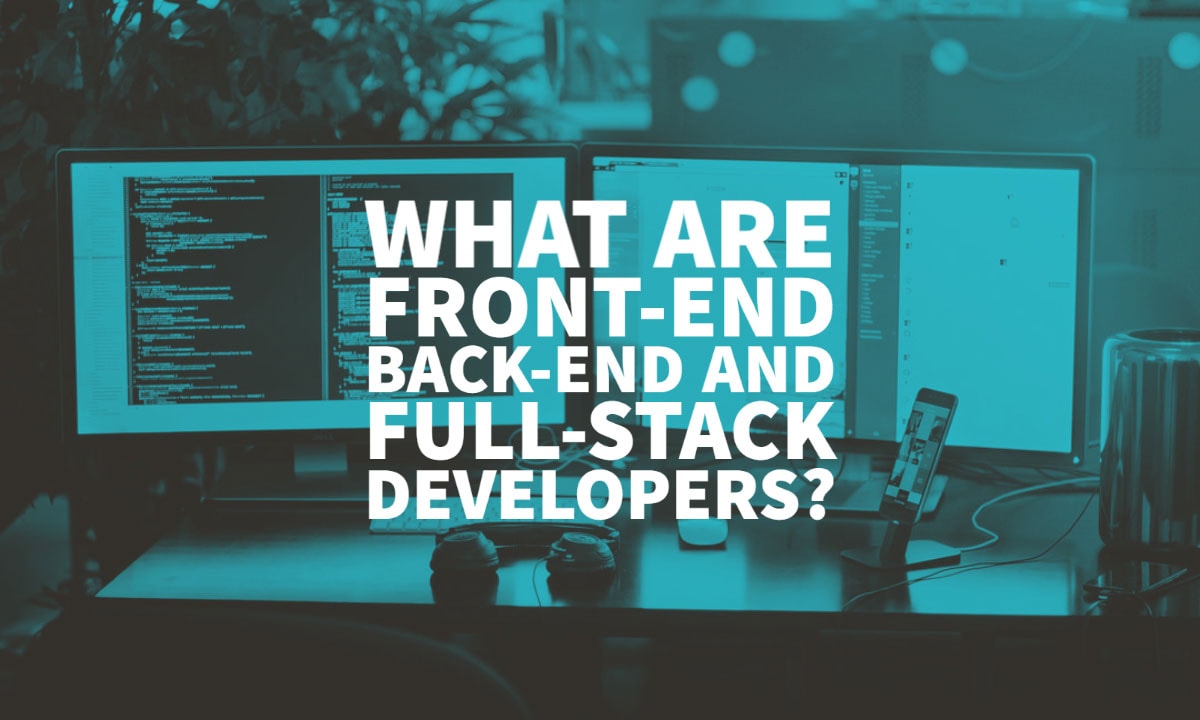 What are Front-End, Back-End And Full-Stack Developers?

If you are perceptive like me, you must have noticed the terms “front-end developer,” “back-end developer,” and “full stack developer” strewn around almost every job listing online.

They are the people that code, build, analyse and maintain applications, which is not surprising at all because more businesses encompass the power of the internet every day through websites and mobile apps.

According to Udacity, there are about 1.5 billion websites as of early this year. Sites are crucial for any business that needs to stay on trend, and web developers are always in demand for their services.

Projections state that web development as a job will grow 27 per cent over ten years, faster than the average of other occupations. The next question would be, “What is a Web Developer, exactly?”

The jobs of web developers vary, and there are specialisations for particular programming languages. However, they are generally classified into three categories. These are the Front end, Back end, and Full-stack developers. Here, we will explore the differences between the three and the skills needed for each.

“Front end”, typically referred to as the “client-side”, is the content users interact with. It relates to the displayed content when users navigate the internet, from the fonts and colours, the drop-down menus to the transitions and modals.

A Front-End developer will have to be versed in HTML, CSS, and JavaScript programming to ensure information is presented as smoothest as possible to the user.

You may also like:   Startup Branding Tips – A Logo Design Guide for Startups

In addition to the programming languages, front-end devs must grasp frameworks like Foundation, Bootstrap, Backbone, AngularJS, and EmberJS.

These ensure the content looks great no matter the device, and libraries like jQuery and LESS help put the code into a useful, time-saving form. Ajax is another technique for using JavaScript that dynamically downloads pages by downloading server data in the background.

The side created by them without the back-end input is called the “static side,” and it does not require any information to store in a database. The site will remain the way it is until it is redesigned. “A front-end developer is liable for the interior design of a house that a back-end developer has built.”

It is noteworthy that there are other jobs with Front-end titles, of which the main distinction is that they are focused on usability and aesthetics. Front-end devs work closely with these people to bring mockups or wireframes from development to delivery. They include:

In plain terms: when you engage a site and see its ultra-clean layout and impressive visuals, it was all made possible by a front-end developer. A designer crafts the logo design and graphics, a photographer takes the pictures, and a copywriter writes the text. Still, it all was assembled by a front-end developer who translated it all into web-speak to create the experience you had.

You may wonder where all the data used for the front end of the website is stored? That is where the back end comes in.

“Back-End”, referred to as the “Server-side”, is the guts of the application that lives on the server and is not visible to the user. It comprises a server, an app, and a database. It is primarily ensuring that the correct data gets sent to the browser.

You may also like:   When Is A Good Time To Rebrand Your Business?

A back-end developer builds and maintains the technology that powers those components together; they work hand in hand with front-end developers to make their code work and tweak the design where necessary. The security, structure, and content management of the sites is the job of a back-end developer.

The developers use programming languages like PHP, Java, Ruby, Python, or .Net to build an application that the database understands. They also employ tools like Oracle, MySQL, and SQL Server to write codes that communicate with the server and tell the browser the needed information from the database.

Experience with Linux, Version control software like SVN, CVS or Git, and PHP frameworks like Symfony, Zend, and CakePHP are other skills that may be required as back-end devs. These tools are used to write clean, well-documented code to create web applications.

Developers collaborate with business stakeholders to translate their needs into technical requirements to develop the most efficient solution for that technology.

In plain terms: when you navigate a website, information is sent to your device by the servers. Hence, the information that pops up on your screen. When you input your personal information online and the fact you can retrieve it whenever you log in, the entire process is made possible by the back-end developer. Front-end developers make the result displayed beautiful and meaningful to you.

Dynamic sites are sites that continuously change and update in real-time. Examples of these are Twitter and Google maps. A dynamic site needs a database to work and store its information, which includes user profiles, images, or posts.

“Stack” means “layer,” and it involves fusing both ends into one.

A Full Stack Developer is best explained as a “Jack of all trades.” The concept is that they can work on both server and client-side and are skilled with multiple frameworks.

You may also like:   5 Ways a Branding Consultant Can Help Your Business Grow

A full-stack developer has expertise on both ends and can build a web application from beginning to end. It includes a form of data structuring or modelling, the server, client and hosting, user interface, experience, and business needs.

The job function was popularised about ten years ago by the engineering department of Facebook. “A full-stack programmer is a generalist who can create a non-trivial application by themselves.

People who develop broad skills also build a good mental model of how different system layers behave”. Their flexibility makes them the most sought of the three companies because they can bring applications to live independently. They function as back-end devs on the server-side of web programming and are also fluent in how to control the face of the content on the user’s end like a front-end dev.

Full-Stack Devs should be well-intimated at every level of how the web works; the setup and configuration of Linux, the writing of server-side APIs, using the client-side JavaScript to power an application, and designing using the CSS. Using these tools, they should be able to solve the client-server responsibilities and proffer the costs and benefits of various solutions.

These days, it is not uncommon to find full-stack developers take up visual design, project management, web design, or user experience skills; to have a complete “stack,” so to say.

As time goes by, the distinction between the front and back end is blurring, and more developers are learning to be “Full Stack’. They are more sought out by business owners who prefer individuals who can take their idea from concept to completion and earn more money than solely front-end or back-end developers.

Contrary to what many think, full-stack developers do not necessarily write all the codes required for a site, but they are well versed across the entire stack of codes to plunge in when needed. Communication is a soft skill they need to possess because they are often required to work directly with their customers.

You may also like:   Branding and Graphic Design: Key Differences