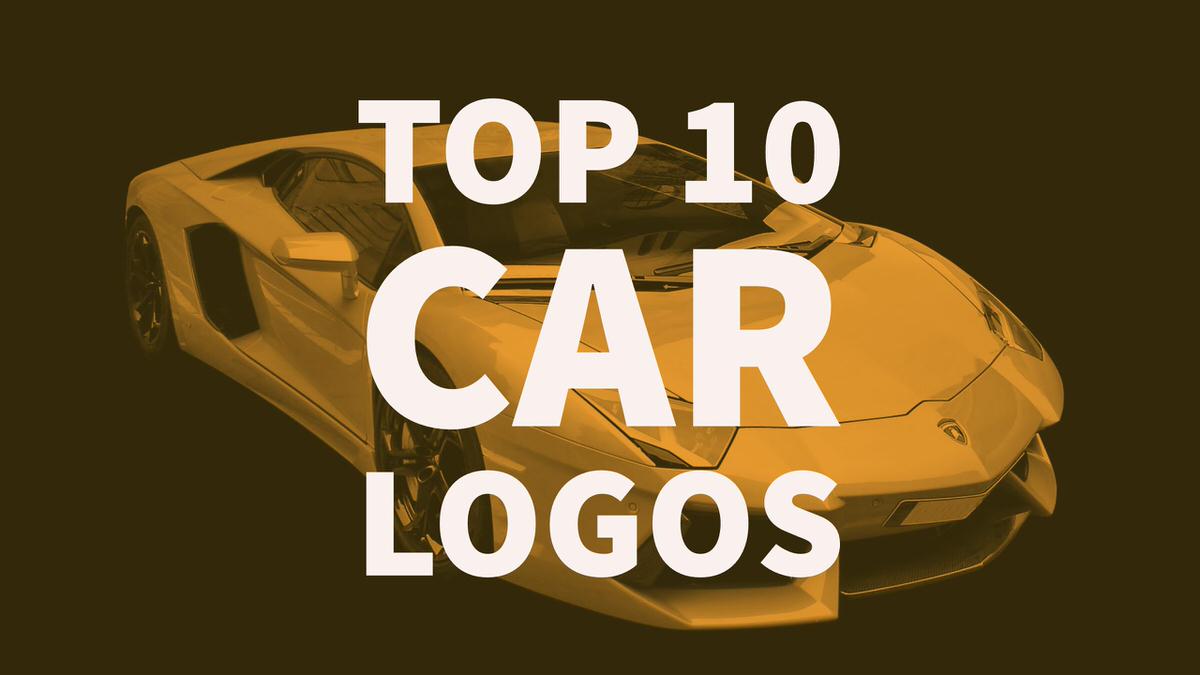 Car brands are often unwaveringly associated with the image they present.

Lamborghini is the Italian supercar of the young and famous, Ford, the hard-working American everyday-man and Jaguar, the sophisticated, British luxury choice.

This brand image can be hard to shift, even if the car company diversifies its production models or even moves into a new industry.

As with most industries, their car logo design plays a major role in the company’s brand identity.

In fact, car logos can be seen as more important, since it is literally stuck or ‘branded’ on the car badge itself – think of the Mercedes symbol sitting prominently on the front of all their cars.

Let’s have a brief look at some of my favourite car logos of all time.

Since I mentioned them above, why not start with the iconic Mercedes logo design.

The surrounding circle was a later addition from the lone star which was the trademark registered in 1909. Interestingly, they also registered a four-pointed star at the same time, but it was never used.

Interestingly, they also registered a four-pointed star at the same time, but it was never used.

The idea to use a star in the first place came from Gottlieb Daimler, the technical director of the gas engine factory.

When he started the job, he had drawn a star above his house on a postcard of the city, telling his wife that one day his factory would go down in history for its success.

Although the Mercedes logo has barely changed from around 1916, they have recently dropped their name from the branded cars logo; a custom recently made popular by the likes of Apple, Nike and Adidas.

As with many car brands logos, the simplicity of the star logo is its real beauty – it oozes elegance which fits the brand mentality perfectly.

Vauxhall is the British car manufacturer affiliated with the German company “Opel”, who are owned by the American “General Motors” corporation.

Founded in 1857, they only started manufacturing cars in 1903 after spending their initial years focusing on marine engines.

The Vauxhall logo design above isn’t their most current version (designed in 1998), which I feel to be over-stylised, but still, contains the memorable Griffin holding the Vauxhall flag.

This version was in existence from 1989 until 1997 and remember seeing it etched in mirror form on the windows of an old Vauxhall Vectra we had years ago.

Well balanced, iconic and in a bold shade of red, I feel this version to be an improvement on the current image.

It certainly applies to the more straightforward and appealing ideas of ‘flat design’.

Arguably the most recognisable and iconic brand in luxury sports cars, the Ferrari logo design or ‘prancing horse’ encapsulates everything they stand for.

Enzo Ferrari, the founder, told the story of Ferrari’s horse logo just once:

The horse was painted on the fuselage of the fighter plane of Francesco Baracca — a heroic airman of the first world war. In 1923, I met count Enrico Baracca, the hero’s father, and then his mother, countess Paulina, who said to me one day, ‘Ferrari, put my son’s prancing horse on your cars – It will bring you good luck’. The horse was, and still is, black, and I added the canary yellow background which is the colour of Modena.

Sitting atop the Ferrari badge is the green, white and red of the Italian flag. This is an example of a design element that isn’t technically required, but from the message it conveys for the car brand logo, is absolutely essential.

This is an example of a design element that isn’t technically required, but from the message it conveys for the car brand logos, is absolutely essential.

The Jaguar car logo comprises of a jumping Jaguar above the business’s name, depicting speed, power and brilliance of the cars produced by the company.

It’s an accurate representation of the brand identity the company holds – the production of one of the most stylish, graceful and fastest cars in the world.

This version of the Jaguar symbol appeared for a decade, from 2002 until 2012 when they ‘updated’ it with even more of a 3D feel.

Personally, their current logo suffers from the same issue as Vauxhall’s, it’s over-stylised and will soon appear dated.

This version emphasises the strength of the jaguar animal, highlighting it’s form and tone through shadow and gradient.

Prior to the Jaguar badge above, their branded car logo was a simple, black and white outline of the shape. It worked well but obviously didn’t fit the companies message.

It worked well but obviously didn’t fit the companies message.

One of my favourite names of car logos and brands of all times, the Audi symbol is as simple and effective as you can find in the industry.

The four rings of the Audi logo design each represents one of four car companies that banded together to create Audi’s predecessor – DKW, Horch, Wanderer and Audi themselves.

Sometimes confused with the Olympics overlapping circles, The Audi logo was designed around 1915 by Lucian Bernhard and modified in 1994 by Sedley Place.

It has remained consistent for a century – the sign of a well-designed logo, created to stand the test of time.

In 1949, Lamborghini’s founder, Ferruccio Lamborghini was working on agricultural manufacturing, primarily of tractors, engines and heaters.

As a successful businessman, he wanted to work with Ferrari on engineering ‘solutions’ for Enzo’s supercars, but the Ferrari founder turned down the offer.

Disappointed, Ferruccio hired a team of young engineers and started work on cars to compete with the Italian giant car brand.

Similarity can be drawn between the charging bull in the Lamborghini logo, and the prancing horse of the Ferrari badge.

They both contain aggressive, powerful animals caught in a pose, presented in tones of yellow/gold on black.

Is this a nod to the rivalry of the two owners?

Or does it simply show that both appreciate the symbolism these animals bring, that can be associated with the message the brand portrays?

Established in 1899, the current Renault logo only took form in around 1925.

Prior to that, the company went through several car logos, ranging from the founder’s initials to a tank!

In 1925, the diamond shape was taken, including the name across the middle.

It was in 1971 the Renault badge as we know it today came to prominence, with Hungarian-French artist Victor Vasarely hired to overhaul and update the Renault logo design.

The yellow colour pushed heavily in the Renault branding can be seen to represent joy, optimism and success.

The Ford logo design has been tweaked quite a few times since its creation in 1903, but the modern typographic letterforms have been persistent throughout.

In 1912, the writing of “Ford” was influenced by Henry Ford’s signature, surrounded in an oval blue crest.

Admittedly, this timelessness plays a large part in why I like the Ford cars logo – its ability to stay consistent over generations.

The current version is the same logo design as they had in the 1960’s, albeit with a subtle fresh coat of paint.

Easily and instantly recognisable, the Ford badge marks the vehicle as a reliable and all-American mentality.

Based in England, the Bentley Motors car name and logo was founded in 1919 by W. O. Bentley, but acquired by Rolls-Royce in the 1930s.

Conceptually, the Bentley car logo design is relatively straightforward, the wings and tail feathers of a bird with a capital ‘B’ in the middle.

As such, it’s remained unchanged over the decades bar a few visual updates to the shape and layout.

The idea of wings in the logo design can be seen to suggest speed and grace, the way a bird flies smoothly at speed throughout the air.

Keeping the logo in a limited colour palette of black, white and silver, shows sophistication in monotone, with elegance in silver.

Volkswagen is the second largest vehicle manufacturer in the world and has three of the top ten best-selling cars of all time (the VW Golf, Beetle and Passat if you’re interested).

Their name means “people’s car” in German and its current slogan is “Das Auto” (“The Car”).

If you spend just a second looking at the Volkswagen logo, you will notice the prominent “V” and “W” placed atop each other.

The beauty comes in how they both follow the form, almost connecting to become two larger, interconnected “V’s”.

If that dividing line splitting the two letters were not there, it would be an entirely different image, potentially confusing or abstract.

Strangely, their car logos weren’t designed by a graphic designer.

The Volkswagen emblem was created by an engineer named Franz Reimspiess, who perfected the Beetle engine in the 1930s.

It was an office competition, with the prize being 50 Deutschmarks – an early crowdsourcing contest that proved fruitful!

So what have I missed off the list of the top 10 car logos and brand names?

What are your favourite car logos of all time?

Do you buy a car based on the image the car brand portrays or does it only come down to the balance of affordability and comfort?