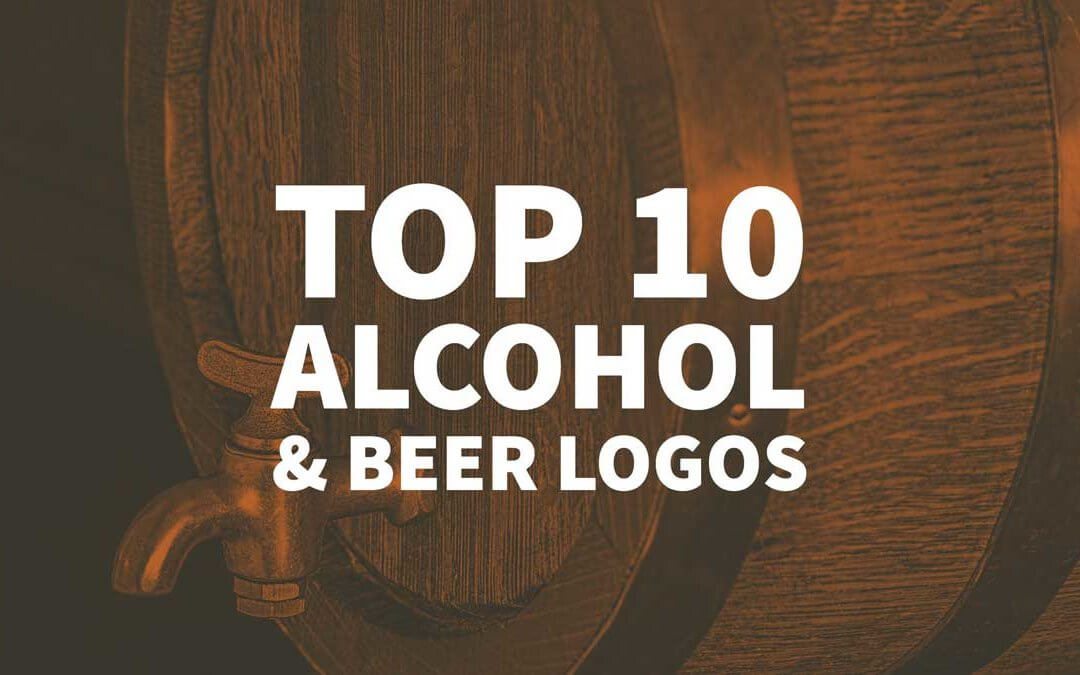 The alcohol industry may not in every instance be the most ethically correct, often criticised of downplaying the negative aspects of the products it sells.

But looking past the morals of advertising and mass-producing something that can do you harm, it’s marketing campaigns and branded packaging are some of the best examples out there of successful strategies.

How many of you have chosen a new drink based on beer brand logos or packaging alone?

Most people are not wine experts and often judge the bottle solely by what it says on the label.

I know I’ve bought a bottle based on its creative logo placement or appealing copy on the description.

Design sells, and below I’ve collated my top 10 alcohol and beer logos, in no particular order. 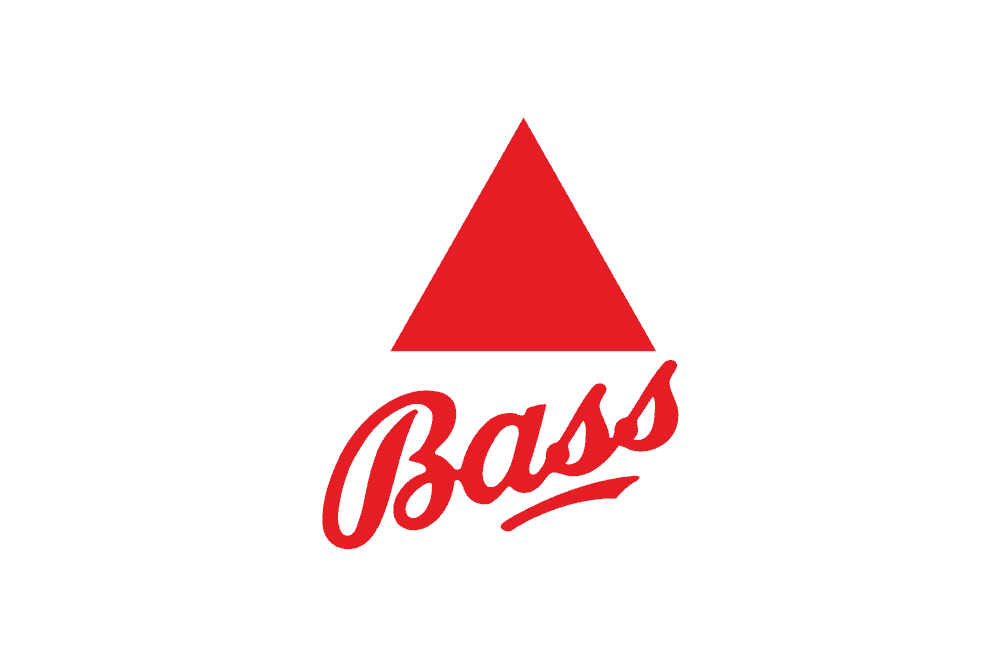 Founded in 1777, the Bass Beer Brewery is officially recognised as having the oldest registered trademark in England.

Filed in 1876, just after the British Trade Mark Registration Act had been set up, they own the privilege of owning trademark no.1 and 2.

An employee waited overnight on New Year’s Eve outside the registrar's office, to be the first in line to register a trademark in the morning.

Bass & Co. Brewery got the first two trademarks, the red triangle for their pale ale and the red diamond for their strong ale.

An example of one of the most simple alcohol logos possible, the Bass triangle beer brand logo symbolises prosperity, growth and success.

Presented in a bold red, energy and passion can be seen within the brand.

With the handwritten name, the suggestion of an elegant ‘signature’ suggests a handmade, authentic quality, adding and contrasting a personality to the geometric logomark. 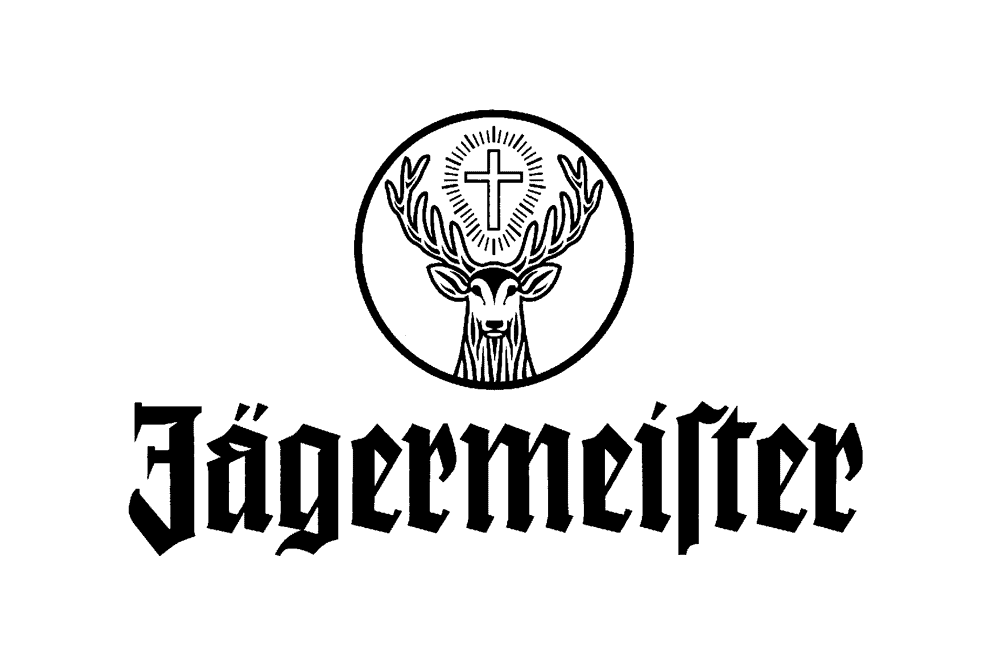 The name translates from the German for “master of hunters”, a job title was given to a high-ranking hunting official for hundreds of years.

Saint Hubertus and Saint Eustace, both of whom converted to Christianity after experiencing a vision in which they saw a Christian cross between the antlers of a stag.

What could be more fitting as a figurehead than the image of a mighty stag – the epitome of pride and uncompromising protection of the herd. However, for the emblem of Jagermeister, it would not be just any stag’s head that came into question. Only a legendary stag’s head would do, one with a beaming cross between its antlers. The stag that appeared to a wild hunter and converted him to Christianity. The same hunter who later became the patron saint of all hunters: Saint Hubertus. This stag remains today, as it always has been, the Jagermeister trademark. A symbol of the preservation of our quality and tradition.

Typography is a traditional Germanic, Gothic-styled typeface, which notably contains the ancient ‘Long S’ that is quite uncommon today. 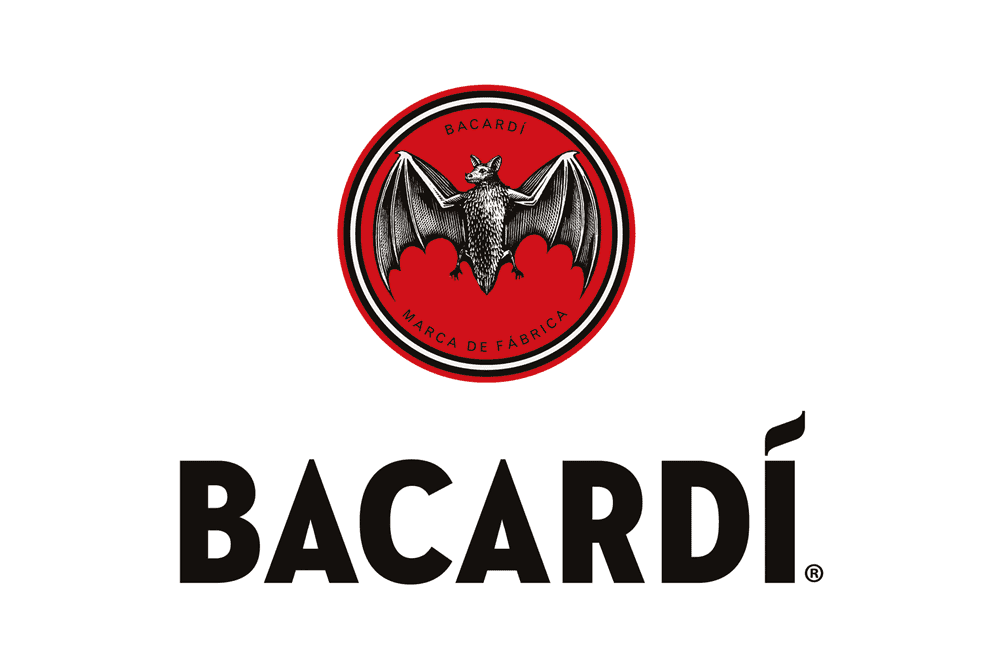 On first appearance, having a bat for a drink manufacturer logo seems confusing, but like many great logos, is drawn from symbolism: “The bat had always been a symbol of good fortune, so when Doña Amalia Bacardi spotted fruit bats in the family’s distillery, she insisted it be used as their symbol.

Today it remains on the bottle, helping the family survive whatever fate throws at it.”

The first samples of a smooth, light-bodied spirit originated from a humble tin-roof distillery with bats in the rafters.

I love the detail in the recently updated Bacardi logo (above) which, since 1959 showed a stylised and simplified bat form.

Simplification of a beer logo is normally an improvement, but in this case, it harks back to represent the traditions of the established brand, rather than a modified ‘Batman symbol.'

Typography, again updated in 2014, is okay, but lacking in comparison to the symbol. 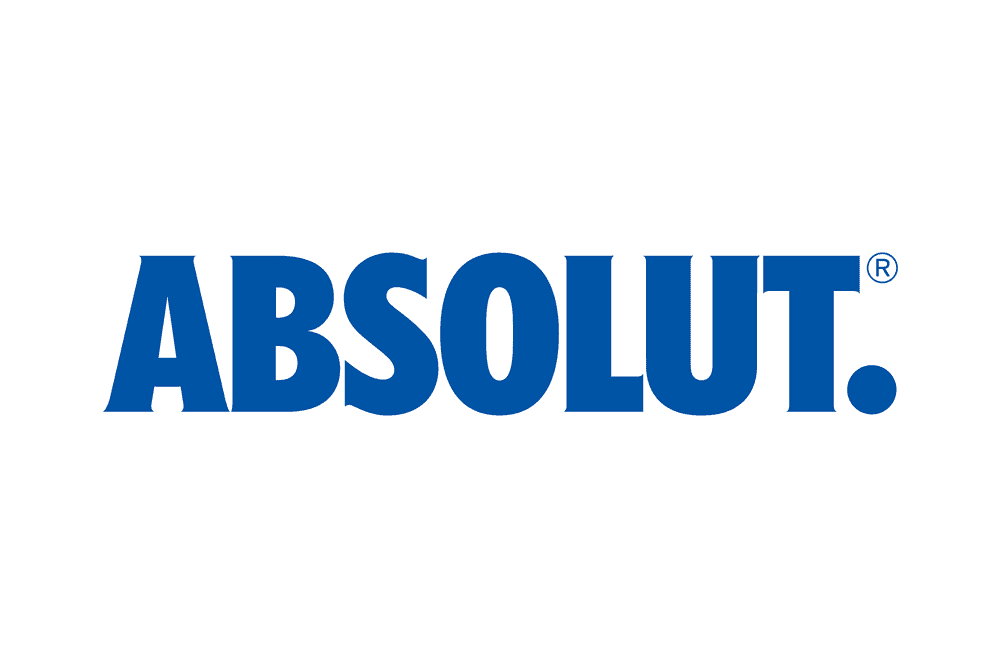 Produced in Sweden, Absolut is the third largest brand of alcoholic spirit in the world and is sold in 126 countries.

The typographic Absolut logo design is an example where packaging produces the brand message, almost more so than the brand logo itself.

In 2014, to show it’s brand strengths, Absolut dropped the “vodka” part off their logo to “expand it’s marketing to new areas without cannibalising the brand’s cache.”

By removing ‘Country of Sweden', and ‘Vodka', we’re putting the focus on the most important part of the brand – Absolut. The word itself not only means the perfect, the complete, and the ultimate, but it also means the open-ended, infinite and indefinite. 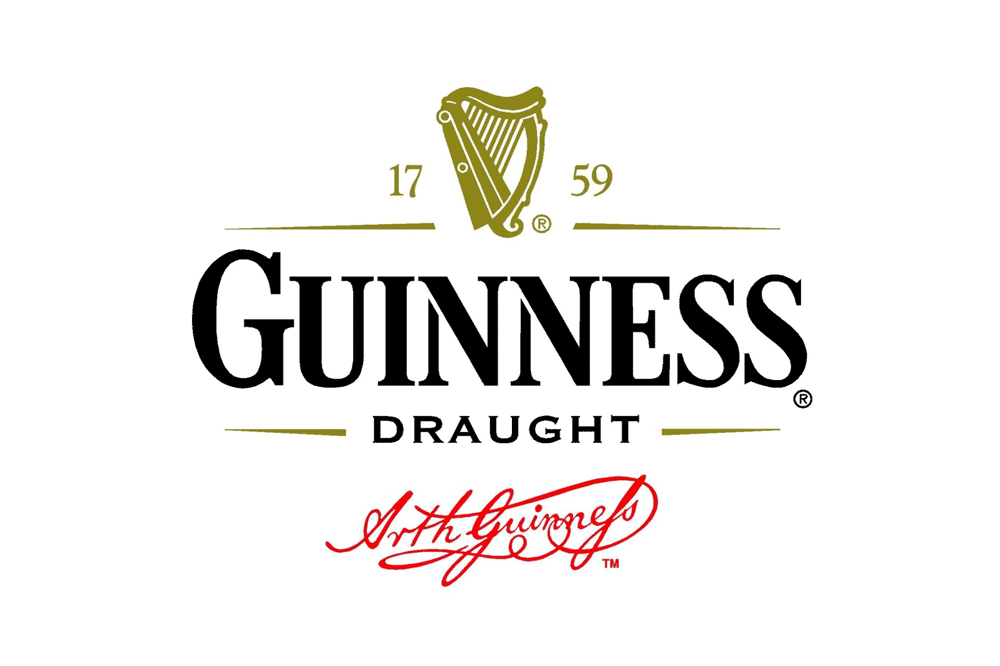 Guinness, a.k.a “Irish Wine”, “The milkshake of beers” or as we call it, “meal in a glass” is one of the most successful beer brewing logos worldwide.

It is brewed in almost 60 countries and is available in over 120.

Their marketing campaigns are legendary, with their TV adverts being works of art, but we are here to look at their beer logo design, arguably their true ‘image’.

The Guinness harp represents the harp of Brian Boru, an Irish king, but is now a symbol of Irish unity and heritage, also appearing on the Euro coin.

Sided by the date of its establishment in 1759, (also the date they signed a 9,000-year lease!) this shows a brand that’s got tradition, history and skills grown over generations.

Presented in various areas of brand media, Arthur Guinness’ signature denotes the idea of certification, the idea that he has personally signed off on it.

He’s an important part of the Guinness brand to this day with “Arthur’s Day” taking place annually since 2009. 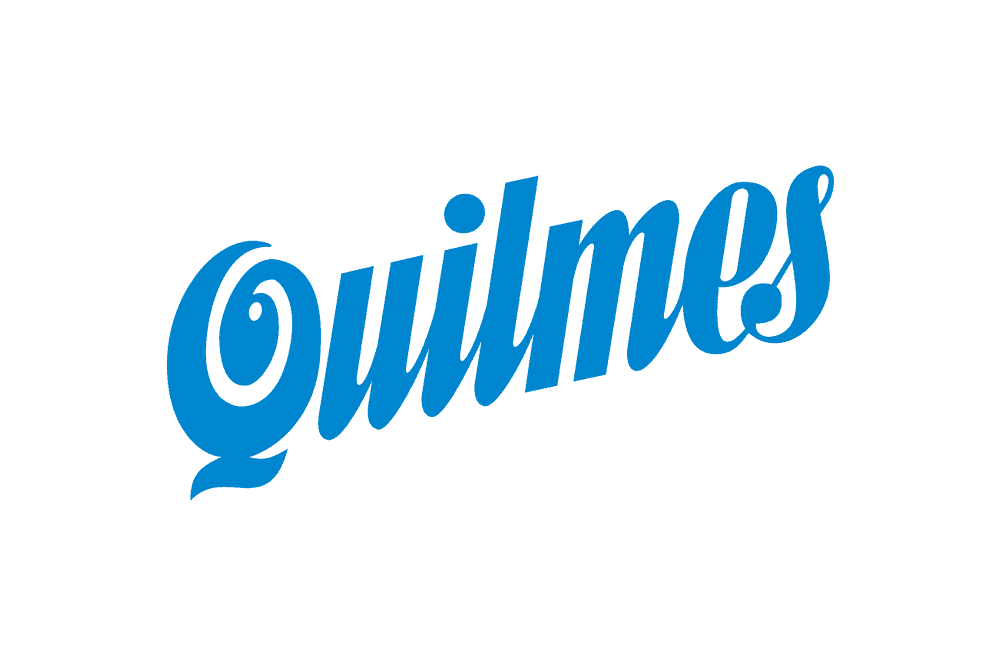 Cervecería y Maltería Quilmes is a brewery founded in 1888 in Quilmes, Argentina, by Otto Bemberg, a German immigrant.

The company experienced rapid growth and in the 1920s was already the most popular beer in Buenos Aires.

Since then, it has become something of a national symbol and has 75% of the beer brand market share in Argentina.

I’m a sucker for calligraphic logotypes, and the Quilmes logo always catches my eye.

The upward movement of the logotype can be seen to suggest growth, success and positivity. 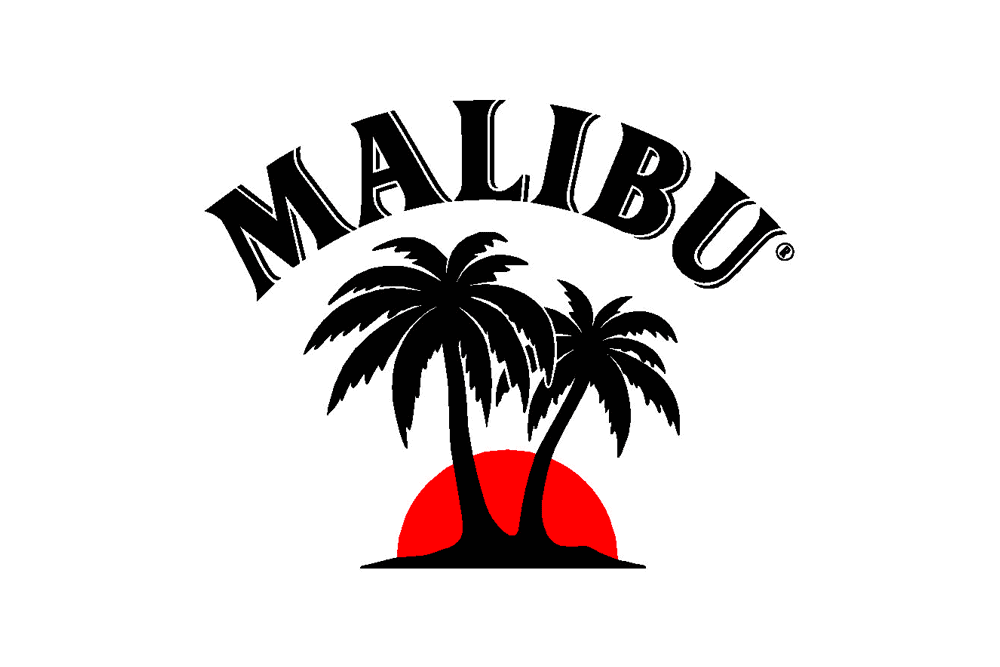 The simplified version of the Malibu logo design (above) is slightly different from the common version, which in place of the red sun contains a yellow to red gradient.

The reason I chose this version was that it shows the core principle of the logo, free from distraction.

Yes, the gradient stylisation may better represent the vibe of a sunset, but this version holds itself better in the reduced palette.

In my opinion, the view of the palm trees and sunset symbolises the ‘idea’ of the Barbados lifestyle, where the rum is distilled. 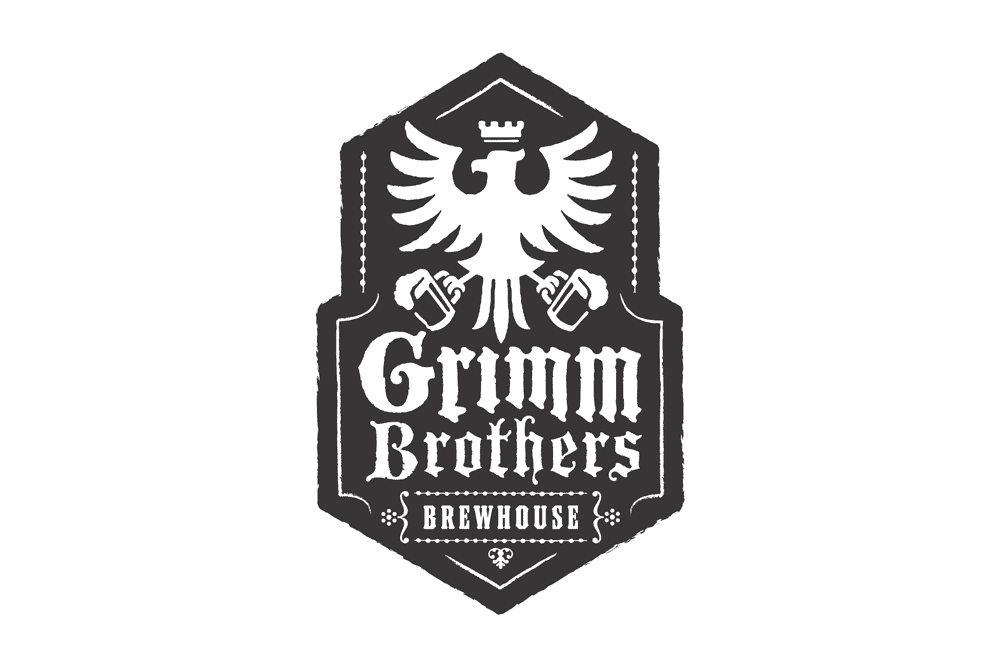 A new brand in comparison to some on this list, the Grimm Brothers Brewhouse in Colorado, was founded by homebrewers captivated by the rich tradition of European beers.

Playing upon the tale of the “Brothers Grimm”, the Grimm Brothers logo styles itself with a gritty, almost deteriorated look, with a vintage style.

The Germanic logomark, with the crowned bird clutching two beer steins, has a feel like the German football team logo of the stylised eagle.

The typography is presented in a Gothic script, which only pushes the dark, dirty image we all have of Medieval Europe. 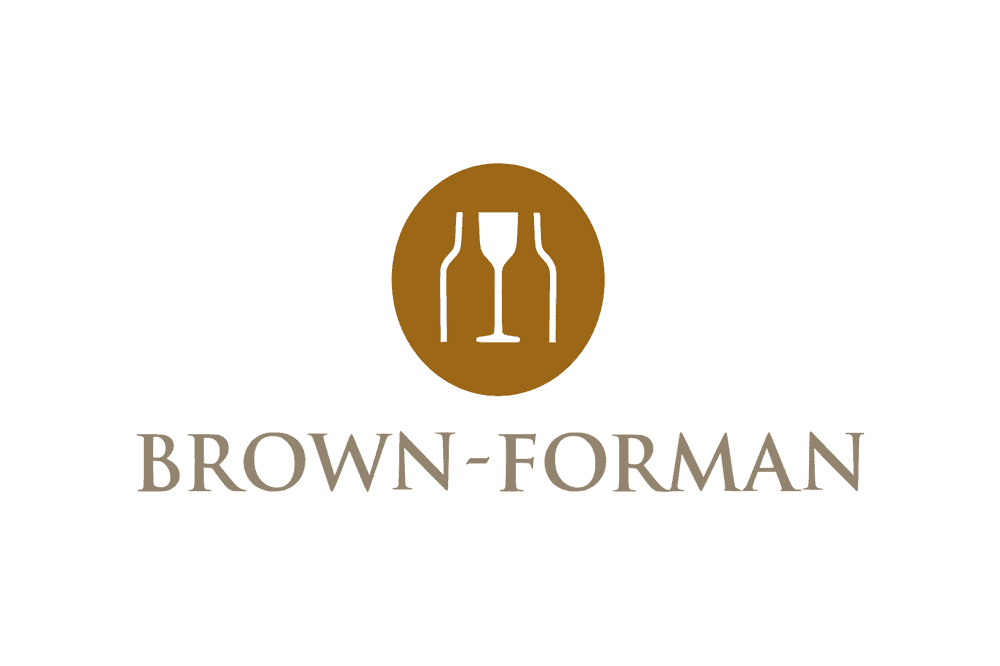 Brown-Forman is one of the largest companies in the spirits and wine business.

Based in Kentucky, they manufacture brands throughout the world, including Jack Daniel's, Chambord and Southern Comfort.

The Brown-Forman logo is an example of a clever logo design that, unlike most of the negative space logos you come across, makes sense and won’t appear dated in a decade.

Deceptively simple, the wine glass hidden between the bottles covers the elements of wine and liqueur that they manufacture.

Despite going for the colour brown in a company whose name contains the word ‘Brown’, it makes sense conceptually, symbolising the organic, earthy quality to the wines and wooden cases, casks and traditional vibe.

You may also like:   Top 10 Fashion Logos & Clothing Brands 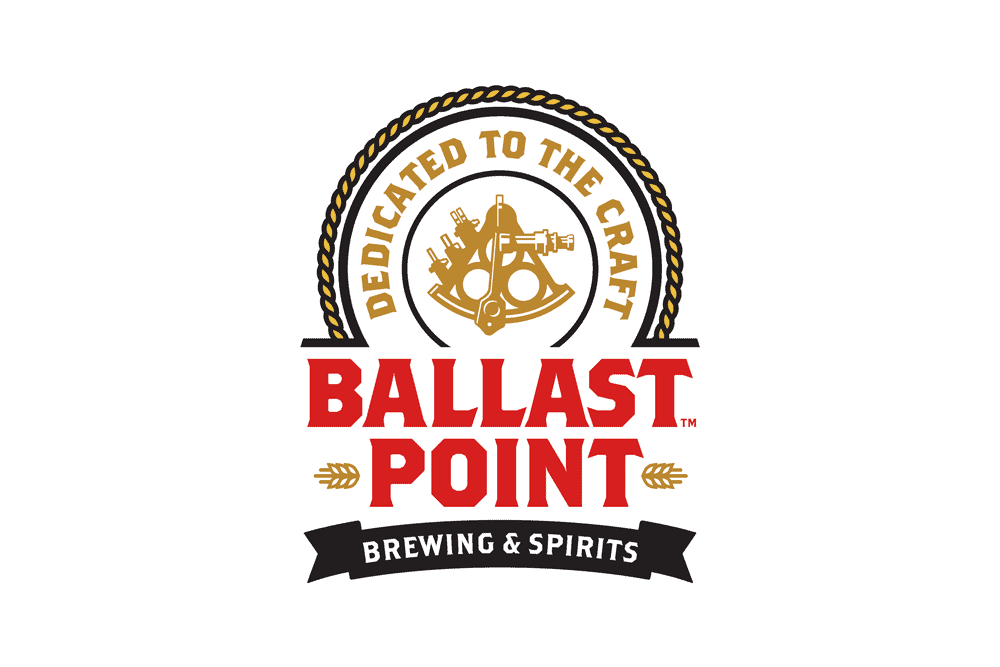 Having gone through eight beer logos in their short history, I think their most recent version should stick around a little longer.

The most eye-catching element in the Ballast Point beer brand logo (above) is the typography, but the logomark is where the history lies: “Often, we are asked to explain the symbol in our logo. The sextant is a navigational device used to measure a star’s angle relative to the horizon, historically used as a nautical tool to help determine a boat’s position. For us, the sextant is a reminder to keep on our journey, continuing to seek out new ideas, new flavours, and new people to share our beer and spirits with.”

In your opinion, what are the top alcohol or beer logos that you’ve come across?

Let us know in the comments below.

If you wish to discuss how we can develop your brand or provide graphic design for your product or business, email us at [email protected] 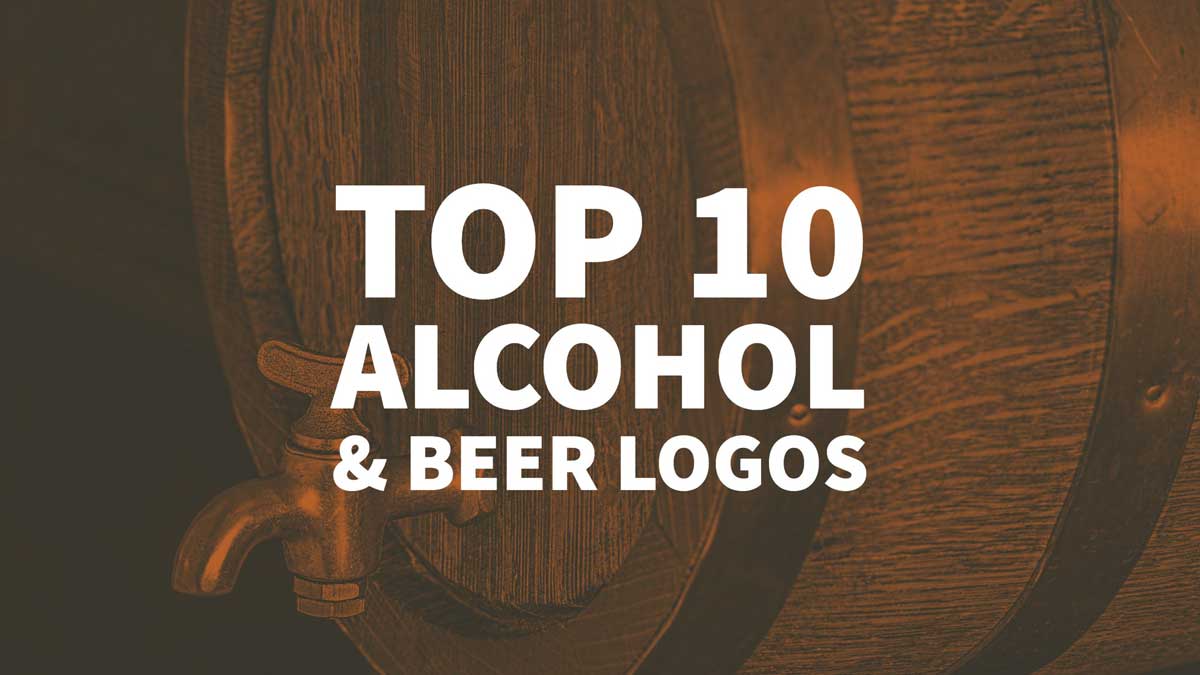