The National Aeronautics and Space Administration is well-known around the world as NASA.

They have operated the USA’s space and aeronautics programs for well over 50 years.

To this day, they have only changed their visual identity and NASA logo design a few times, even though the nature of their company and mission allows them to experiment to their hearts’ content.

What is the story behind the NASA logo and subsequent logotypes and what can we learn from their efforts to stay true to the initial idea of the agency?

What will I learn? show
The illustrated NASA logo iteration
The meatball
The NASA logotype era
The time of nostalgia
Designing for the future

NASA was once called NACA, back in 1957 while the agency was still in its infancy.

The title of this now forgotten agency was The National Advisory Committee on Aeronautics.

The reason behind the name change was simple – the agency began working closely with the government on developing spaceflight and space shuttle capabilities.

This is something that NASA does to this very day, although with a much larger competition than it once used to have, thanks to people such as Elon Musk taking the reins of the space race. 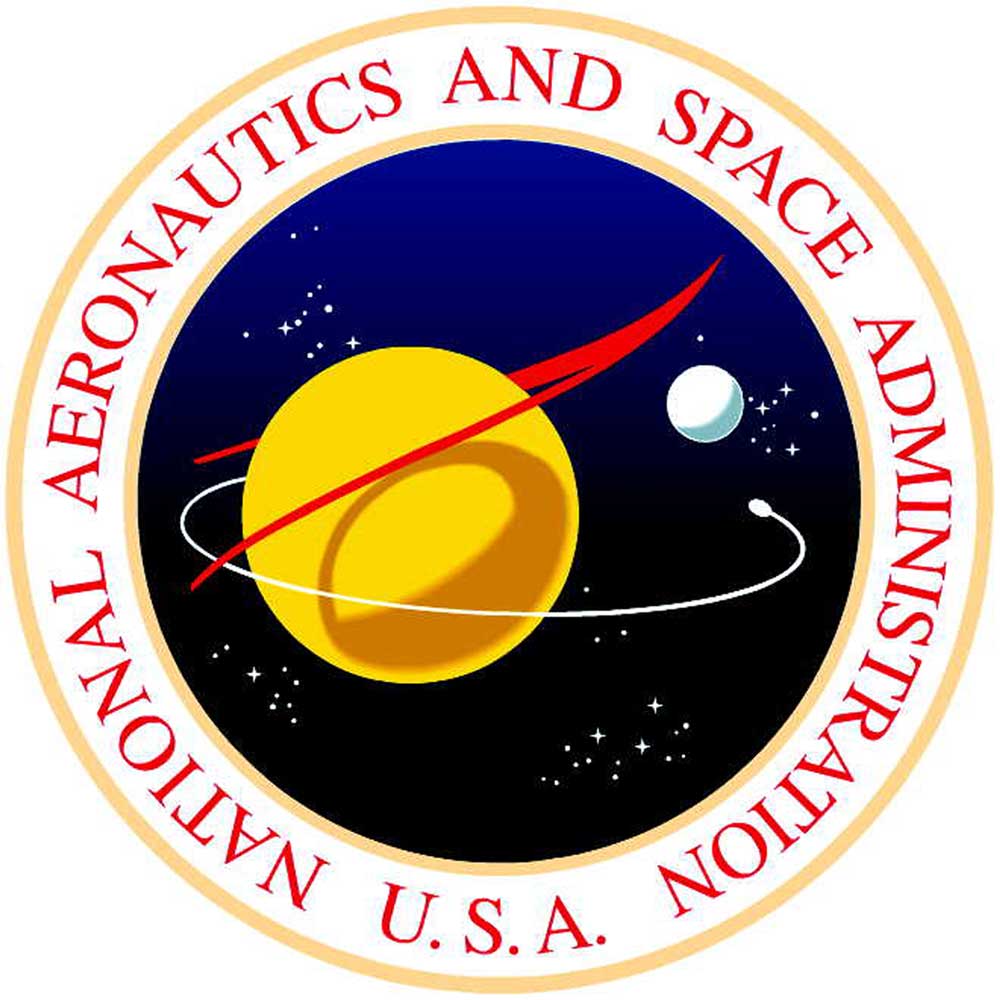 Coming back to NASA and its first visual identity, it was a work of art done by the agency’s in-house illustrator by the name of James Modarelli.

Modarelli was an illustrator of his time, which can be clearly seen in the round shape of the NASA logo and its colour scheme that reflects the modern America of those days.

While the logo itself represents the efforts and strivings of young NASA in a brilliant way, it didn’t stand the test of time as these trends have long past their prime.

The spherical positioning of the title behind “NASA” and its allusion to the oval office was not intentional – NASA began working very closely with the US government and has received lucrative funding as a result.

You may also like:   Brochure Design Guide - Examples & Templates for Stunning Brochures

The choice of colours can also be seen as an allusion to the American flag that boasts similarly designed stars on its blue surface.

The idea was to show the public that the newly-reformed NASA is to work for the American people and not against them nor in secrecy.

The numerous Apollo missions culminating with the 1969 moon landing can attest to the close work these two entities have conducted during the following years.

However, as time went by, the public and many of the famous design agencies have started voicing their concerns about the logo.

Should the logo be a representation of its time or strive to do something more than that?

Modarelli took this criticism to heart and started working on a more modern, futuristic take on NASA’s logo, one that will become the staple of the agency in pop culture for the foreseeable future.

The now popularized term “meatball” wasn’t introduced to the vocabulary until 1975, although the logo itself began its life shortly after the criticism of the first one started to take shape.

James Modarelli took it upon himself to modernize the visual identity he helped craft in the first place and mend any mistakes he might have made the first time around.

The agency decided to trust him with this endeavour and in the early 1960’, Modarelli introduced a logo that will become the staple of the agency to this very day.

We can clearly see the resemblance to the original visual identity which was short lived for good reasons.

The new NASA logo boasts a simplified spherical design with a more subtle and modern pattern.

The red stripe symbolizes the agency’s mission and vision to reach for the skies and explore the unknown.

The stars and the shooting star in the centre signify a constant movement and the unknown factor that the universe is known for.

You may also like:   9 Essential Logo Design Rules to Build Better Brands

The background blue is there to round the entire logo in a controlled spherical shape and give the identity a stable stance.

James Modarelli took the world by surprise when he modernized the old logo due to a public conception that NASA should represent the people it’s trying to encourage and work for.

While Modarelli didn’t have access to professional writing services such as SupremeDissertations.com, he did, however, have an entire team of designers and marketing experts to bounce ideas off of.

He was the creative director behind the entire endeavour and with the funding and support he received from NASA, his hands were completely free to do whatever they saw fit.

The new logo reached into the future and gave the people of today something to aspire to, a possible future where we are the creators of our fate and masters of space.

The now-comically titled “meatball” became known as such thanks to a newer logo iteration which we will get into next.

The name was derived from the logo’s spherical shape, which is something that the next version of the agency’s logo didn’t have.

The 1980’s were a time of postmodern movements that shaped the architectural landscape of now urban centres such as New York, San Francisco and Washington.

NASA’s administration wanted to reflect the time period that the agency was operating in and decided to have their logo redesigned once more.

This time, Modarelli was long gone, and in his place came Richard Danne and Bruce Blackburn, a designer duo with a vision of the future that NASA was particularly fond of.

It’s easy to see why the administration and the public alike were taken by surprise when Danne and Blackburn presented their vision of the company to the board.

While the board liked where this logo would take the company, they weren’t sure that everyone would be aboard with the idea of a stripped-down logo with no iconic shapes or illustrations to hold onto.

You may also like:   You Don’t Have to Leave Home to Become a Designer: Is it True?

That is why they made a bold move and decided not to tell anyone from the lower management until it was too late.

The redesign was kept secret until it was fully implemented and sent out to internal agencies across the state in memorandums – this decision was met with swift resistance at the time.

One can easily see why some people at NASA were worried about where the agency was heading.

The logotype, not a logo, that we have before us is a simple stylized inscription that says “NASA”. The letters are stylized in order to represent the strong resolve and the dream of taking the skies that the agency is very-well known for to this day.

However, not much else could be said about the logotype and apart from it winning the prestigious “Award of Design Excellence” upon its implementation, the logotype was scrapped after 17 years of use.

What came after were a welcome change and a surprise to many lovers of the “meatball” design that NASA was known for to that day.

The time of nostalgia

NASA didn’t think about illustrating a new logo for the future because they already had one ready to be implemented.

The “meatball” design returned to the forefront after a 17-year hiatus to much public and internal praise.

The year 1992 saw the return to old tradition and the “magic” of exploration was back in NASA, as the sources at the time would like to confirm.

The reason for this change back to something that worked before was and remains pretty clear – the “meatball” was ahead of its time in design, esthetic and ideas that it brought to the table.

Anyone that sees NASA in the press is likely to imagine this very logo in their heads even though the “worm” design is more recent.

You may also like:   3 Levels of Don Norman Emotional Design

The now-defunct logotype is still being used on some miniature printed items in the agency due to the “meatball” being too detailed for such occasions.

The details simply vanish from existence thanks to very small elements that need to be printed on some of the equipment and gear being used in the agency.

NASA has continued to experiment with internal designs on their space shuttles, aircraft, departments and teams.

For the sake of argument, let’s take a look at one of the solutions being implemented on a space shuttle and let’s see how it weighs in resemblance to the “meatball” logo.

Just like with sports or army patches, NASA does the same with their internal teams and crafts.

This allows the people working in the agency to feel as if they are a part of something bigger than themselves and to offer them a healthy sense of camaraderie with the people they work with.

This logo has been implemented on the Columbia space shuttle on its very first launch.

The resemblance to the current NASA logo can be seen in the spherical shape of the logo and the idea of striving for the skies.

The shuttle circles our planned and launches upward, hoping to explore and make space hospitable for future generations.

Such ideas and missions are often found throughout NASA and its subsidiary agencies.

Depending on the time period, one can notice the resemblance between the popular logo and logotype solutions and NASA’s own visual identity.

Designing for the future

The rivalry between the supporters of “meatball” and “worm” design continues to this day, with some arguing that going back to something old isn’t necessarily good and others claiming that the logotype is simply too generalized.

Whether you agree with any of these statements or have an opinion of your own is another matter entirely.

You may also like:   Top 10 Fashion Logos: Best Designs in the Industry

We are yet to see a perfect design solution that everyone in the world agrees on – something that will probably never happen.

Keep in mind that NASA can always update their logo in an attempt to reach for the future once more and surprise us all with an innovative new solution.

Until that happens, all we can do is focus on the present and do our part in making sure that people are familiar with how design works, where it all began and where it is headed next.

If you wish to discuss how we can develop your brand or provide graphic design for your product or business, email us: he***@in**********.com

2 thoughts on “History of the NASA Logo Design”