Who Knew These 7 Celebrities Were Graphic Designers? 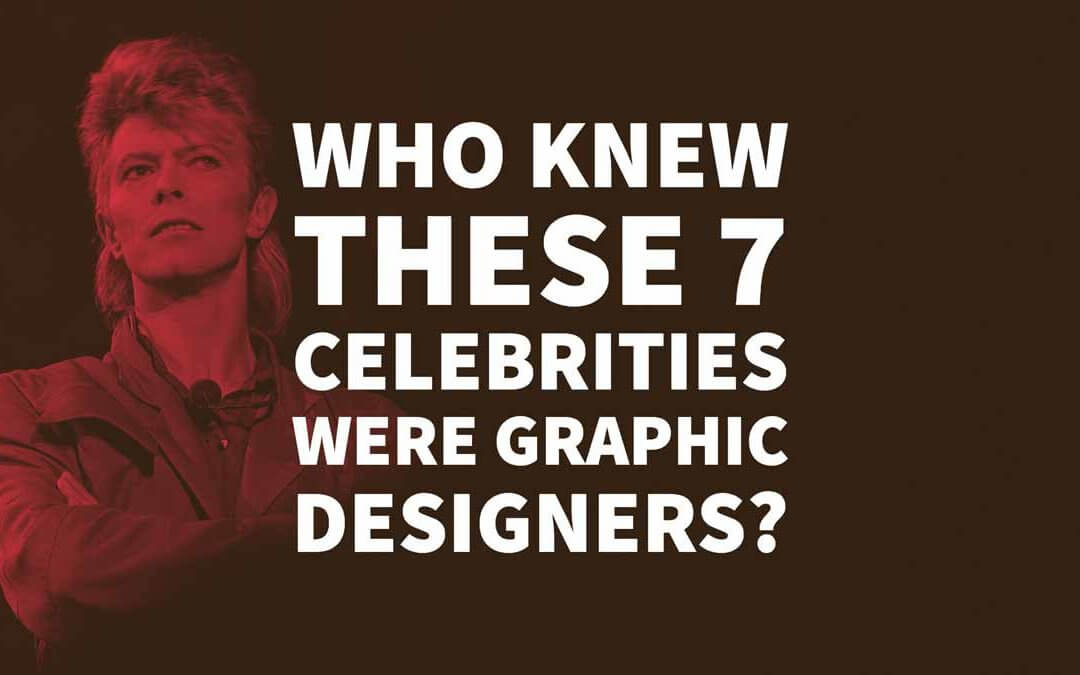 But this is not the type of celebrity we’re talking about; we’re talking about the sort of names we see every day in the media – the screen actors, and musicians who, before they became famous, were actually trained in graphic design.

The following household names studied and/or worked in graphic design in the earlier stages of their lives before they caught their big career breaks.

A huge name in the acting world – but few know that before he became Hans Gruber and Severus Snape, Alan Rickman actually made a living from being a graphic designer.

After graduating from Chelsea College of Art & Design he went on to complete a postgraduate degree at the Royal College of Art where he worked as a copy editor on issues #45 and #46 of ‘Ark’ – the well-known student journal – in 1969 and 1970.

He also wrote a couple of articles in the magazine including one named ‘Child’s Play’.

It was whilst studying here that he worked as a graphic designer for the ‘Notting Hill Herald’ and also took the big step of setting up his own design agency named ‘Graphiti’ along with some of his friends.

Together they ran the studio successfully for three years, however, Rickman’s true passion always lay in acting.

Eventually, in 1972, he made the decision to let Graphiti go as he had been accepted into the Royal Academy of Dramatic Arts – the crucial move which would take him on to play the characters we know and love today.

Before what he describes as his ‘Epiphany moment’ when he took up the role of Gollum in The Lord Of The Rings, Andy Serkis had other plans for his career.

He studied visual arts at Lancaster University and chose to follow this with theatre studies so he could carry out his plan to make a career from designing posters for production companies.

In 2011 he told IndieLondon: “I wanted to be a painter or a graphic designer”, but this was before he started acting in various promotions and eventually landed his first motion capture role.

He knew then what he really wanted to do with his life and left his designing days behind.

Funny how things turn out. It’s a shame that the design world lost a talented artist, however, we have since been treated to some pure on-screen motion magic from Serkis which more than makes up for it. ‘Gollum! Gollum!’

These days, most of us know Capaldi for playing the 12th Doctor in the wildly popular Doctor Who TV series.

Some of us may also remember him more prominently as the swear-happy spin-doctor Malcolm Tucker in the TV series ‘The Thick Of It’.

In another time and space, however, Capaldi was a design student.

He studied graphic design at the Glasgow School of Art, graduating in 1980 before going on to pursue his acting career.

More recently he was part of the effort to raise £20M to restore the school’s Mackintosh building, which was partly destroyed by a fire in May this year.

As a former student, he felt a sense of duty to the buildings that formed a huge part of his youth.

Although Capaldi didn’t pursue a career in design after his graduation, he remains very passionate about the Arts and his roots there.

There wasn’t a great deal that David Bowie didn’t have a go at in the 60’s and 70’s, so it’s really no wonder there was a period of time in which he studied Graphic Design in his youth.

He studied at Bromley College of Art in the early 1960’s and specialised in layout and typesetting.

Pretty much everybody says that their studies changed their lives and made them who they are today, and the same can most definitely be said for Bowie, with his actually being a physical change.

Whilst he was studying at Bromley, he was punched in the face by another student during a fight over a girl (boys will be boys).

This punch was what damaged his left eye leaving him with the permanently dilated pupil, something which he is known for.

Bowie never actually went on to make a career out of design after his studies, however, his experiences at Art College were heavily influential throughout his musical career.

The founding member of the highly influential rap group, Public Enemy, is also a very creative guy outside the world of music.

He didn’t quite make it to graduation first time around as he was kicked out; Chuck blames this on a great deal of heavy partying as a freshman.

Inspired by some of the earliest rap records being released in the late 70’s he did, however, return to college to complete his final year.

He was highly talented and specialised in record cover design – he even made the Dean’s list when he finally graduated in 1984.

Unsurprisingly then, Public Enemy’s well-known and widely recognised logo design was actually designed by Chuck D in 1986 using not much more than magic markers, a copy machine and a silhouette of LL Cool J Sidekick E Love.

In fact, he has been responsible for most of the band’s visual identity throughout their successful career.

If you weren’t already impressed by this star-studded line-up of famous creatives, then you surely must be now.

Pete Townshend, guitarist and songwriter of the third biggest band of the 60’s and 70’s, also a talented graphic designer? Yes indeed.

Townshend studied graphic design at Ealing College of Art in the 1960’s alongside Ronnie Wood and Freddie Mercury (yes you read that correctly, there are actually loads of them).

By his own admission, his creative studies helped shape his musical career and playing style and also helped him in the visual branding of The Who.

In 2012 he told Guitarist Magazine: “I was at art school, surrounded by real intellectuals, I was greatly impressed by all this and wanted to please these people.

As you will probably have noticed in the last section, Ronnie Wood of the Rolling Stones was indeed at Ealing College of Art in the 60’s along with Pete Townshend that, in itself, is fascinating.

Ronnie actually followed in the footsteps of his two older brothers, Art and Ted, both of whom were graphic artists who studied at Ealing and ran a graphic design business together.

A young Ronnie Wood began his visual artistry in his childhood when some of his drawings were featured on the BBC television programme Sketch Club.

As an adult, his drawings and prints have been featured in exhibitions across the world and he even designed the cover artwork to Eric Clapton's 1988 box set Crossroads.

It sure is nice to know that we, as creatives, share this common ground with these giants of the showbiz world; we are clearly in very good company indeed.

Know any more celebrity graphic designers who should be on this list? Tell us about it in the comments below.