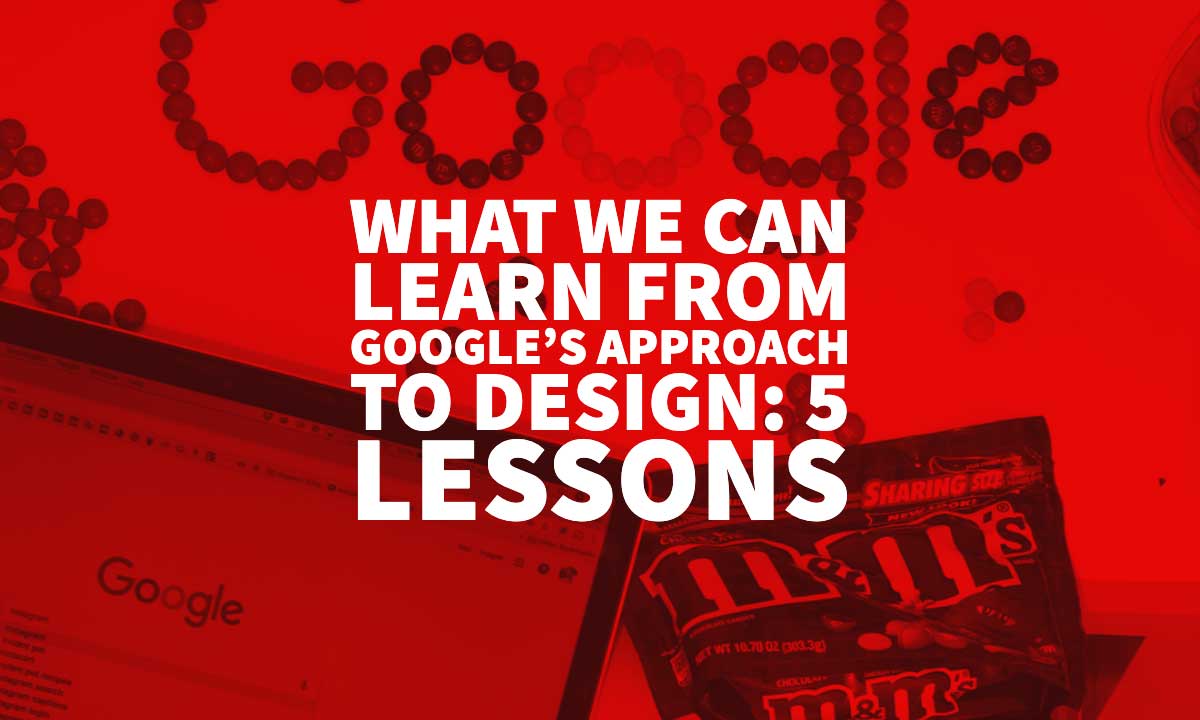 What We Can Learn From Google’s Approach To Design: 5 Lessons

Google knows a thing or two about design.

Its vast ecosystem encompasses much of the daily life of the average office worker, even if they don’t work in the so-called digital industry that hosts all the copywriters, ad managers, and content creators.

There’s Google Drive keeping company files structured, secure, and accessible. There’s Gmail, which many people use both for their personal emails and for their professional emails.

There’s Google Maps serving as the go-to journey planner. Even resolute Apple devotees inevitably go back to Google services from time to time.

And while this partially stems from the well-established dominance of its search service, people wouldn’t consistently return to Google’s software if it weren’t exceptionally useful for productivity and entertainment alike.

It’s hard to argue that it isn’t extraordinarily polished.

For everyone else in the design world, then, it’s perfectly sensible to look to Google for inspiration.

It’s a company with near-unlimited resources and a resounding commitment to creating outstanding industry-standard software — why wouldn’t you glean all you could?

To that end, let’s take a look at 5 potent design lessons that can be drawn from Google’s overarching design approach, and consider how the average business can apply those lessons to achieve better design results:

What will I learn? show
Prioritise functionality
Be data-informed
Factor in all users
Consult everyone
Iterate rapidly
Conclusion

It might seem odd to recall, but Google’s current design ethos is still fairly new.

The approach we all know as Material Design was only developed in 2014, but has become so ubiquitous (and had such a remarkable effect upon other companies’ design philosophies) that it feels like it’s been around for much longer than that.

Core to Material Design is getting across the comfort of pen-and-paper designs while catering to the demands of digital layouts.

MD apps and windows are clear, optimally responsive, and incredibly crisp — in all scenarios, scaled up or down, they perform with aplomb.

Note that the showiest aesthetic elements (still far from showy relative to other design approaches) are both optional and practical additions.

Depth lighting isn’t necessary for an MD interface to work, and it helps to delineate the distinct parts of the structure. You’ll never see a noisy Google design: everything is added for a reason.

Given how many design companies (and digital businesses in general) are in existence today, it’s understandable when someone worries about standing out and wishes to do something unique with their interface — but functionality is not something to be compromised.

Like Google, you must master the basics first, then add some stylistic flourishes if they can be implemented without damaging the ease of use.

We live in the era of big data, with immense bodies of digital metrics at our fingertips on a 24/7 basis.

This is great for machine learning, certainly, and for reviewing project success, but it isn’t quite as good for the design process as we prefer to think.

Why? Because we get too stuck on the data and become overly reductive with our thinking.

This is something that Google’s Creative Director Christopher Morabito has talked about extensively.

Appearing on Dribbble’s Overtime podcast, he made a number of excellent points, but I think the following, in particular, is worth highlighting:

“I think we try really hard to be data-informed, and for me, what that means is that you can collect all the data in the world. In fact, sometimes, I think, like, we have too much data and we don’t know what to do with it, but you cannot substitute any amount of data for a point of view about what you think you’re trying to do for a user and why you think that’s going to be interesting and valuable.“

If you stick rigidly to the data to make design-related decisions, you’ll inevitably lose track of the overall purpose of the design — of what it’s supposed to help the user achieve.

What if you get stuck in the habit of optimising for dwell time, forgetting that spending more time on a page isn’t necessarily better for you or the user?

As Morabito suggests, we should be data-informed.

The data should influence the decisions we make, expanding the context in which we make them, but it mustn’t become the core overriding concern.

Falling into the trap is how you get designs that stack up numerically but more closely resemble stitched-together abominations.

Factor in all users

There’s a blissful convenience that accompanies the possession of a powerful smartphone with a consistently-quick data connection, and we can easily take it for granted.

When deciding if your website is fast enough to load, for instance, you might test it several times on your phone, assuming that the result will be sufficiently representative. It likely won’t.

With a vast global reach, Google understands all too well how important it is to consider all possible users and design for as many realistic scenarios as possible.

Emerging markets are important to its expansion, so it invests in devising solutions to the problems that inevitably stem from trying to move bleeding-edge tech systems into places that still lack stable internet access.

This need for speed on limited connections was a driving force behind the development of AMP (Accelerated Mobile Pages), a project that Google took over and ran with.

(Ben Morss, Google’s Developer Advocate, spoke about it on Marketing Speak, so I suggest checking that out if you’re interested in learning more.)

And then there’s the matter of language because you can’t always rely on text to communicate meaning.

When you design something that may be required to work in numerous countries, think very carefully about how the symbols might be interpreted — skeuomorphism can be more intuitive, but it adds clutter. This is why Material Design is a great option.

Designers can easily get stuck in the design bubble, stopping only to consult their colleagues for advice and specific suggestions.

It’s easy to understand why this is preferable: when you invest a lot of time and effort in your design work, you don’t want to field harsh criticism from people with no design experience or skill.

Unfortunately for those designers, though, input from different people is generally worth pursuing.

Hardik Pandya, a Designer at Google, wrote a great piece for Medium about what he’d learned while working there, and the very first thing he noted about the working process is that you should consult everyone and get as many opinions as possible:

“Consult your PMs, Eng, Front-end devs, fellow designers and more. This is often tiring but rewarding. By bouncing off early ideas on paper with the engineers, I’ve often successfully narrowed down explore-worthy approaches to 1 or 2 good ones and saved myself time and energy. This also helps build great relationships with engineers as they are rightfully included in the process.”

At the very beginning of the design process, when there isn’t yet a clear direction in which to take the project, a Google team will gather for extensive ideation.

The goal is purely to get down as many ideas as possible from a range of sources because you never know where a great idea will come from.

In your business, then, make a concerted effort to gather the thoughts of people whose opinions and skills you wouldn’t ordinarily deem relevant.

You might just find that someone who knows nothing about what you do is better able to spot something awry than you are — after all, the longer you stare at something, the harder it gets to make an accurate assessment.

And if an opinion arises that you strongly disagree with, that’s fine: you can simply argue your point.

You’re probably familiar with agile methodology, and the practice of tackling projects in distinct fixed-length stages known as sprints.

Instead of using the traditional waterfall project structure (plan everything out in great detail, then move steadily through the phases), you can commit a sprint to a single element, then gauge the results and use them to inform the next sprint.

Well, much of this approach was developed at Google, as part of the Google Ventures department (now known as simply GV) — and Jake Knapp, a former Design Partner at GV, has since written a book all about the methodology.

Google continues to use the five-day sprinting model, splitting it into straightforward stages that run from ideation to prototype testing.

Do you need to adopt that specific period of time for your sprints? No, not really.

If it suits your business better to use two-week sprints, give it a try.

The core benefits of clarity and flexibility will still be there (albeit slightly reduced), and any agility is better than none.

Regardless, though, you must make a real commitment to iterative improvement, because there’s no perfect design in the digital realm.

User needs change, and you must be ready to change with them.

Google’s approach to design work is nothing if not consistent.

Everything is given plenty of time, thought over carefully and tweaked until it’s ready for the limelight.

You might not be able to spend so much time getting things right, but you can certainly draw from the above lessons to give your design process a semblance of that Google grace.