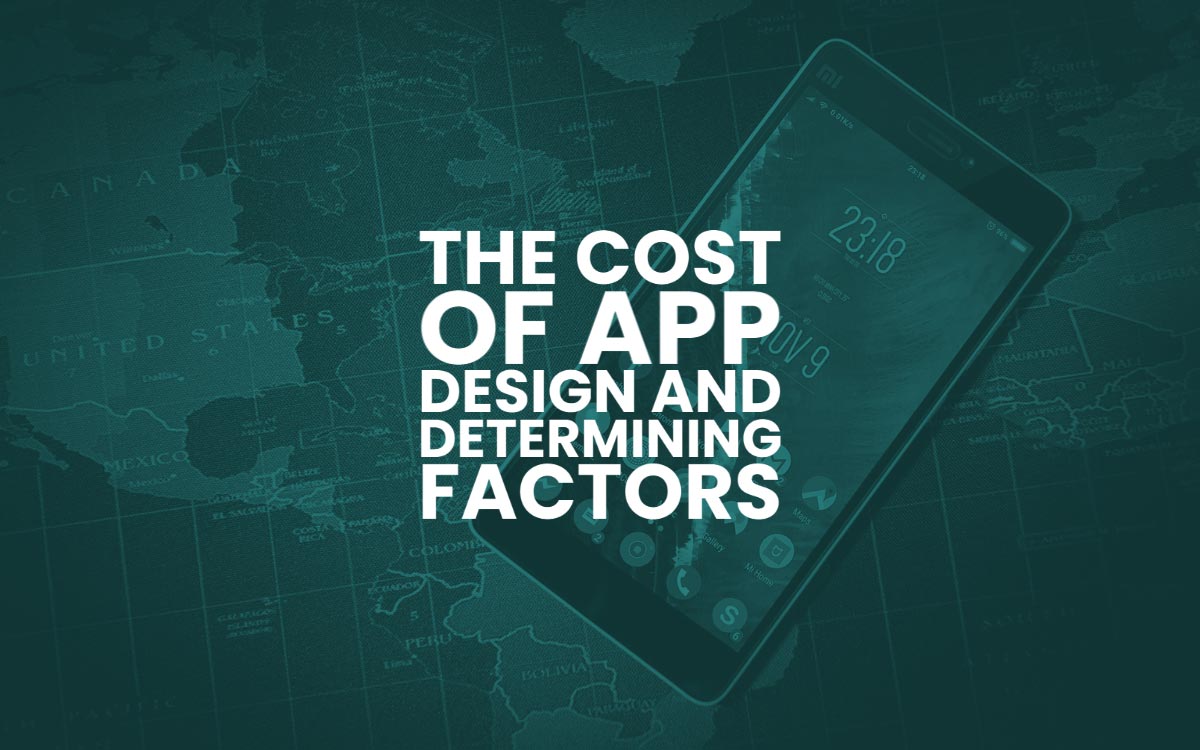 The Cost of App Design and Determining Factors

Mobile applications are the key drivers of every business at the current time.

Amazon, Netflix, and PUBG are some of the best apps that provide utility to millions of users worldwide.

We can conclude that if you have a business and want to skyrocket your customer base.

It is time for you to get an app made.

An attractive and functional app is vital for the success or failure of a business. And the design is a factor that plays a crucial role in app building.

However, as often believed, an app design is not only about the app’s look; it also involves the functional aspect.

Like everything else, the app designing process begins with ideation and research.

This is an extensive phase. Each phase step is as crucial as the development phase and involves two main app elements, UX and UI.

Both these processes are inclusive of the app and impact the overall cost of design.

As you review this article, you will know how and why the process increases app design costs.

You will also know the best place to get your job done.

Factors that influence the cost of app design

Numerous factors are involved in influencing the overall cost of app design.

These may vary slightly from designer to designer and from region to region. However, the overall scenario remains the same.

All designs involve a series of necessary steps before the actual development occurs.

This is the design phase of an app and involves the following five processes.

You may also like:   What are the Best Digital Marketing Channels for Your Business?

The complexity of the app

The complexity involved in developing influences the cost of app design considerably. Here is a breakdown of applications into their types to make things more apparent.

The complexity of an app is affected by certain elements. These include:

Remember these elements as you understand each app type more deeply. Please pay attention to the infrastructure; it is responsible for the price hike.

As the name suggests, the app has a minimalist design and simple navigation.

These applications are a maximum of three screens long with no animation or interactive elements.

These apps have several interactive elements, screens, and animations for end users.

These are commonly designed for Android and iOS separately to meet the platform’s requirements.

Examples of medium-complexity apps are Uber and Whatsapp.

These apps are purpose-driven and depend significantly on designs.

Transitions and animations are used to send users from one screen to another to convert them into customers.

Many screens are used for this. These apps also have massive external integrations for payment, maps, etc.

Examples of such apps include Netflix and eCommerce apps.

Check the table to understand the approximate app design cost for the three types.

Besides, the cost of app design is also dependent on a client’s preference and customisation requirements.

Mixed app design. It is slightly less than a custom app design. With the need to add only one or two elements, the cost increases only for those charged additionally.

You may also like:   iOS App Development - Basics, Trends and Best Practices

How many roles do you intend to have for your app that impacts the cost significantly?

This keeps the design price relatively low compared to the ones with more user roles.

For instance, a cab-hiring service has three users: Admin, Driver, and Customer.

Read the figures below to know how much it would cost you in different countries.

In designing an app, design specialists add functionalities with the help of features.

These features can be broadly divided into two main categories, namely,

The UX Design is a sum of all the processes that define a user’s experience with the app.

It involves a series of strategic activities, such as,

While undertaking the above processes, the UX designers provide a preview of the to-be-built app.

This stage of design planning takes about 2-3 weeks.

During this stage, how the user interface will work is decided, and which screens and buttons will be added to provide smooth and straightforward navigation are also finalised.

Take the example of a food app.

UX designers’ major work includes planning the restaurant category to search, adding ‘save the card’ and ‘pay’ buttons, the payment options to be offered to the customers and more.

Wireframing is time-consuming and may add to the budget of all the UX processes.

Nevertheless, it is an essential element because if you are required to make changes to a fully designed screen at any stage, the availability of wireframes will make it easier. This saves time as well as money.

You may also like:   Top 10 SEO Tips to Boost Your Google Rankings

The entire UX design process takes anywhere between 40 to 160 hours and is priced accordingly in different parts of the world (discussed later in this article) and uses a variety of tools such as Sketch, Axure and more.

The visual design, or how an app looks to a user, comes under UI design.

While you have plans for sliders and buttons, you need to think of the presentation. This encompasses choosing:

This is a creative phase. Besides creating the app’s look and feel, how the buttons or screens function in the final product is considered.

The need for animations to be added is also contemplated.

A UI designer is responsible for creating a set of rules, aka a design system that applies to the presentation of various components.

Branding is closely related to UI or visual design as it involves a mobile app icon and logo design.

All said we know a high-quality app design speaks volumes.

It isn’t easy to gauge the price as it involves many elements such as logo and icon, screenshots of app stores and a design system using different tools.

Again it is priced differently and depends heavily on the preferences.

The complexity of business logic

According to the Harvard Business School study, 70% of the employees do not know much about their company’s strategy, which should be the foundation block of mobile app design.

Creating and implementing an app strategy by deriving from a company’s strategy has its set of benefits, namely,

A successful business strategy is one where business objectives meet the mobile landscape and user requirements.

It begins with understanding the company’s strategy, besides the following:

You may also like:   5 Design Tips to Make your Jewellery Websites Stand Out

They envisioned a store without walls for a long and implemented the same with a robust mobile app strategy.

The app succeeded in having over 2 million mobile app downloads, with 90% of the sales coming through it while making it a convenient source.

It can be summed up as having a powerful mobile app strategy, and it is essential to define your objective for the audience with the critical KPIs included.

Which platform are you aiming to build your app for – iOS, Android, or both?

If you choose to go with both, the cost is significantly higher.

In general, companies design an iOS app first and then an Android.

That said, every organisation follows a different approach.

Android apps must be matched with varied formats and resolutions, while iOS has no such requirements. This perhaps increases the cost manifold.

Check the table for the cost of app design in iOS for different devices:

Since Android is continually changing, so are the rules.

This requires the android app developers to adapt to new ideologies and frameworks, which increases the overall price.

Besides, the number of platforms is adding to the price.

The sort of design: Native or Hybrid

What sort of design are you looking to build: native or hybrid?

If you decide to go with native apps, the next step is to finalise the platform – iOS or Android.

Your decision will affect the overall design of the mobile app.

Note that the native apps must follow certain specific platforms’ guidelines and add to the user experience.

If a native app is your calling, be ready to shell out $100,000, which means if you want an iOS app for the App Store and an Android app for Google Play Store, you will have to invest in two separate apps.

You may also like:   Top 5 Proven Ways to Measure Brand Equity

And this makes designing a native app dearer.

In contrast, if you pick a hybrid app, the cost of designing is much less, as you can launch a single app on Android and iOS.

The process is more straightforward and thus faster, adding to the lower cost.

However, the performance will not be as good as the native apps.

The Team: how many do you need, their level, type, and location

App designing is laborious work requiring calculation at each step, making it difficult for a single individual to handle it.

It requires a team of people with specific qualifications, understanding and experience to design an app that stands out from the rest.

You can categorise them into three levels:

These designers can be further classified into four types:

You can find app designers all over the world.

However, it is seen that the price of designing an app varies from country to country.

A few geographical regions are more attractive than others due to their relatively lower rates.

Therefore it is advised to enquire about the rates upfront before outsourcing your app design task.

As per Clutch, below are some interesting statistics for designing an app country-wise:

The final product’s quality can vary significantly from country to country, just like the cost.

The cost of app design rests on various factors.

From the complexity of apps to the number of roles, an app may become costlier as you add more complex features and functionalities.

You may finally choose your expert level and the country to create an app.

Everything depends on your requirements and the budget.