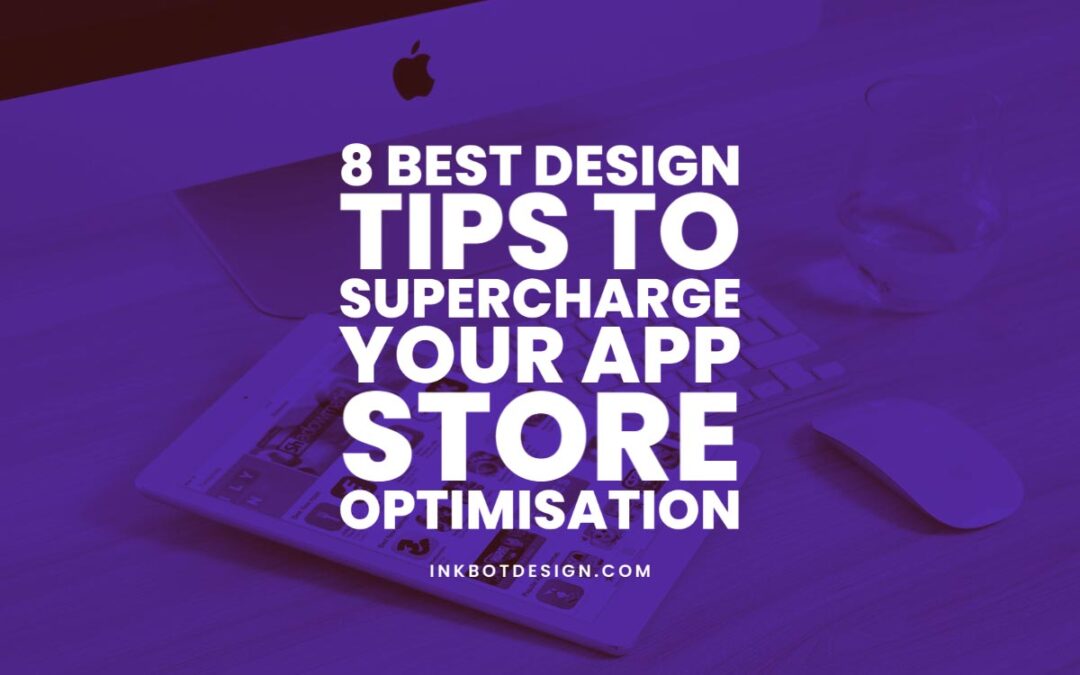 You only get one chance to make a good impression, and with so much competition in the apps market, design counts.

Working on an app listing is different from designing the app itself – although how your app looks will feature heavily in the listing.

At Uscreen, we've worked on the design and publication of thousands of apps for our OTT video customers, so we know a thing or two about app store optimisation.

To help you know exactly what it takes to optimise your app listing for both the App Store and Play Store, we're sharing our top 8 design tips.

Let's get right into them.

What is App Store Optimisation?

App store optimisation (ASO) is a set of processes and techniques that help boost your mobile app's visibility on Apple's App Store and Google's Play Store.

From a design perspective, this means you need to make your app visually appealing wherever it appears on an app store, such as:

There are techniques to implement around the app's name and description, but we're going to hone in on how you, as a designer, can boost an app's listing.

Let's check out why it's so important.

Why Does Design Matter for Your App Store Listing?

There are millions of apps vying for users’ attention; there were nearly 3.5 million Android apps and more than 2.2 million iOS apps as of Q1 2021.

Growth in the number of available apps in the same quarter was 10.6% and 6.1%, respectively – you need to make your app stand out from the crowd.

It's not just volume; the design of your app store listing matters because:

Well-thought-out design elements can play a pivotal role in an app being downloaded.

Let's look at the elements you need to consider.

Whether your app is the foundation of a new business or an element of a broader product offering, you must keep everything consistent.

This means all the elements that you create for an app need to match up with everything else you're doing, including:

This will ensure your audience and customers can spot your app quickly, even if other apps have a similar name.

Having one set of designs that work across your app listing, website, and the app itself will also keep things organised – you won't have to keep images for all different purposes.

Canadian-based yoga teacher Clara Roberts-Oss launched her app in March 2020 and has a clear brand message.

…as well as the favicon she uses.

The image on her website is also similar to the one used on the screenshots – both are Clara, and she's wearing the same outfit.

Anyone who knows who she is and is aware of her yoga classes will say undoubtedly that this app is part of her official package.

Your app features are its most vital selling point, so you need to use your visual space to communicate that.

You can choose screenshots of the app being used, which can be helpful for apps that complete a process, like ride-hailing or shopping, showing the search functions and simple ordering process.

When your app is video-based, you need to highlight what's special and unique about the videos you offer.

This can be a screenshot of the catalogues of videos and images that explain why your videos are the absolute best in your niche.

An example should make this clear.

Studio Bloom is a pre-and post-natal yoga app offering classes for people at all stages of their pregnancy.

As you can see in the image below, Studio Bloom uses the screenshot space to add text about their offering and show how each feature looks in the app.

The background images reinforce who the app is aimed at, the text is clear about the unique benefits of the app, and the actual screenshots let users know exactly what they're getting.

We are moving on to the next tip.

3. Make Sure You Include the Right Device for Each App Store

From your time browsing for apps or researching how other companies list their apps, you probably know that lots of places use full-phone screenshots within their screenshot space.

Although the visual space that the app stores give you is intended purely for screenshots, more and more companies are using it to showcase their message and branding.

What's important when designing these spaces is to match the correct device to the exemplary screenshot.

Play Store is a little easier since there are many hundreds of handsets that run Android – as long as you don't use an iPhone image, you should be fine.

Let's visualise this for you.

Sersana is a Mexican health and fitness app that's available on both iOS and Android.

In the example on the left, you can see screenshots, including what seems to be a phone from the Samsung Galaxy S range.

Samsung has a massive chunk of the Android device market, so it makes sense to use a Samsung device to illustrate its features in the Play Store.

Meanwhile, Sersana's App Store listing uses images of what looks like an iPhone 12.

This simple touch shows the user devices they're familiar with in the brand ecosystem they use.

Design tip number 4 is on the way.

4. Make Sure You’re Aware of the Size Requirements for Each App Store

The two most extensive mobile operating systems are Apple's iOS and Google's Android, with a global market share of 26% and 72% each.

You'll already know how different the tech and design ecosystems are for each platform, with different screen ratios and pixel limits.

Getting your app store listing right means you'll need to optimise your logos and screenshots for Apple and Android users.

It's also worth considering the different audiences that might use either app and use different app features in both stores.

Let's see how that looks in practice.

Cakeflix TV taps into the trend for cake decorating, with video tutorials for all skill levels.

The screenshots above show precisely why you need to plan your ASO with both platforms in mind.

The left one, from Play Store, offers four screenshots to get your initial offering across, whilst the one on the right from App Store only has less than two screenshots to convey your message.

You are making sure that you take these elements and logo and other design differences into account should improve your app store rankings.

The next tip is being served.

5. Include CTAs in Your Screenshots

Calls-to-action (CTAs) are design skills all on their own.

There are lots of things to consider, such as:

You can't add a CTA button directly on your app store listing, but you can add information that urges users to download your app and let them know the possible actions within it.

This could include showing them the “add to cart” button so they can see an easy buying process on your eCommerce app or telling them they can watch regular live streams through well-placed text.

This is how it can look.

Strala yoga offers a range of gentle and healing flow arts with their online video catalogue available to their site members.

Included in their screenshot space, you can see their app in action, including the “Join” button under a class.

The accompanying text reinforces the message, and the more engaging and active copy is on the following screenshot.

Let's see the sixth design tip we've got for you.

You want people to understand how easy-to-use and intuitive your new app is right from the beginning.

An engaging way to do this is by telling a story through the designs of your screenshots.

By demonstrating how the app flows together and how the user will get value from your app, you're selling the experience to them.

Also, consider telling the story of how your app works through someone's everyday life if it's a journaling or organisational tool, for example.

Here's an app that's telling a story with its screenshots.

As well as a simple and bold logo, the screenshots show how a user would be able to search for and select the content they want to stream.

Through the screenshots, the user can see what the app will look like in practice and see how they would move through the catalogue to start watching their video.

It's a simple but powerful technique to show your app's features.

To the next design tip.

7. Make Sure that Your App Store Listing Stands Out

We've already seen how much competition is out there when it comes to apps.

Your app listing design needs to be on point and popping off the screen to grab attention, and your images need to be perfectly edited.

It's worth noting that more than 80% of people use their mobile devices in dark mode, so using colours that'll be effective against the black background is going to get your attention.

Your logo is the first thing most people will see, so keep it simple and to the point – you want it to communicate what you're about.

For the screenshots, colours that contrast nicely and have movement should grab the potential downloader's attention.

We've got an example for you.

The colours used in the listing are bright and feature an image of Roger Gracie himself, a 10-times world champion and a face that you will know too many people are searching for this type of app.

Showing the app against a red background, framed by the dark screen, also works well to make it stand out.

Couple this with a transparent logo so searchers know exactly what the app is, and this is an effective app store listing for sure.

One more tip is coming up.

8. Create a Mockup of Your App Store Listing

As with any design you do, you must create a mockup before committing to a final version.

Considering how important your app store listings are, doing a mockup and getting feedback from your potential market is a step you shouldn’t miss.

There are many tools available that will help you mock up your screenshots to the correct size and help you visualise what the complete listing will look like.

As we've seen in some of our examples already, there are different ways to present your screenshot space on app stores, and each style lends itself to a different style of the app.

Some sites let you mock up your app store designs for Apple and Android, such as Previewed and AppMockUp.

Once you've got your screenshots lined up, you need to test them.

How big your company and your audience are will determine how you go about this; when you already have an engaged audience, you can select some people and ask for their opinion on some options.

Are you just starting with your app-based business? You can still ask your friends and family for help.

Some live A/B testing may also work to see which designs can pull in more downloads – your app store listing isn't set in stone, and you can change up the screenshot designs if you need to.

That's all our tips, so let's bring this to a close.

Now Over to You

Getting the design right for your app store listing should see your app downloaded and used often.

Design is an essential element of drawing people in – along with the name, and description, of course.

Choose the correct type of design to suit your app content, and remember that you can always change and adapt it as you get feedback about your listing.

What designs have worked well for your recent app listings?

Let us know in the comments.

Author Bio: Amir is the SEO Lead at Uscreen, an all-in-one video monetization platform that empowers video entrepreneurs and creators to monetise their content and build thriving businesses around their videos.