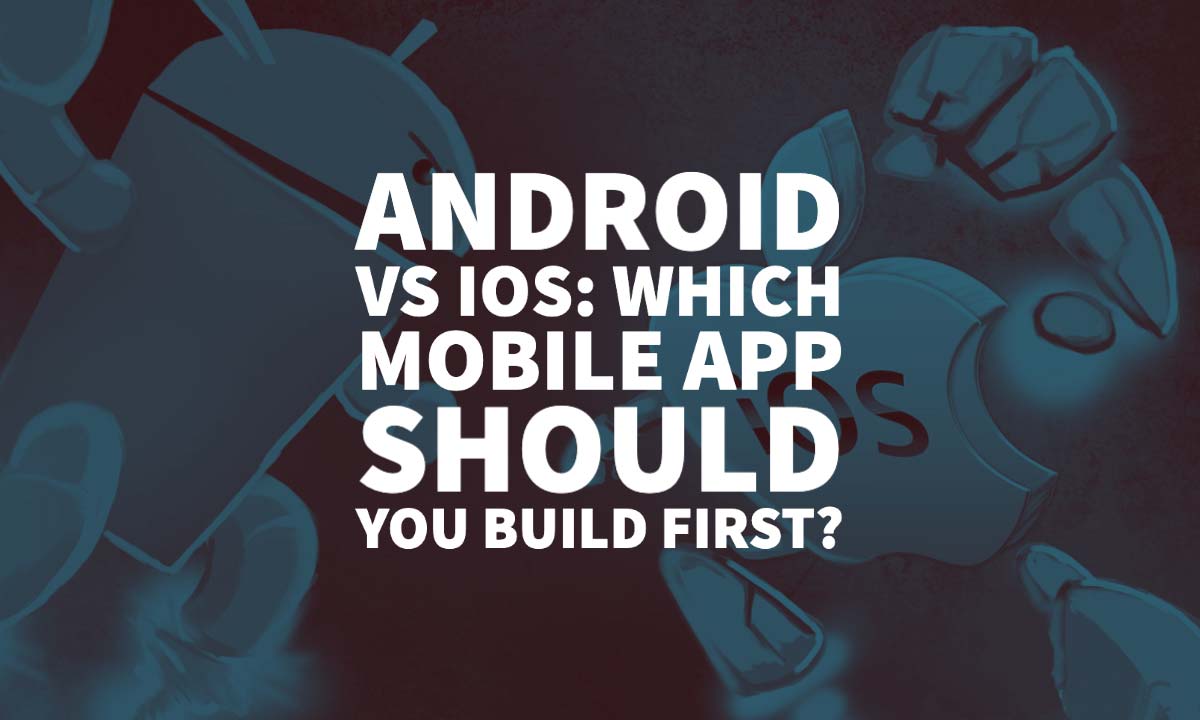 Android vs IOS: Which Mobile App Should You Build First?

It doesn’t matter if you have a big business or small, building and launching a mobile app is the new trick to increase customer reach.

You’ll notice that nearly every business has a dedicated app – be it a restaurant or a clothing store.

But the one thing they wonder about is, which app should they build first – Android vs iOS?

Smartphone users around the globe are divided into two major groups – Android and iOS.

The debate between the two platforms has a long history because they’re both unique in their own way.

Both platforms offer a variety of features, and that’s what becomes the reason why the market is divided.

When the developer starts building a mobile app, their choice is mostly influenced by the pros and cons of Android and iOS.

Ultimately, it comes down to five major factors, that will help you decide which app to build first – Android or iOS?

Let’s look at the detailed statistics we’ve gathered for each factor mentioned above.

If you are looking to dive into the mobile app market, these key points will help you choose which platform to target first:

What will I learn? show
Factors That Determine Which App To Build First
What Your Customers Need
Flexibility – Android vs iOS
The Project Timeline
Fragmentation
Release Cycles
Monetisation – Which will profit first?
Android vs IOS – what should it be?

Factors That Determine Which App To Build First

What Your Customers Need

Until now, your customers were engaging with your brand through your website.

To know which mobile app to develop first, you need to understand which platform your audience uses.

Your target market primarily consists of Android or iOS users. If there are more Android users, developing an Android app first would be the best strategy.

Additionally, if your app is a success on Android, then you can look into building an iOS app too.

You can also look at this geographically.

If your customers are outside the US, Europe, or Australia, Android should be your first priority because it dominates the market in Asian and African continents.

Likewise, if you have a more extensive market base in the USA, Europe or Australia, build an iOS app first.

However, sometimes a business has an equal number of Android and iOS users, which can make it tough to understand which app to build first. To resolve that dilemma, consider these factors:

Why Choose Your Android Audience?

Why Choose Your iOS Audience?

What features do you want to implement into your mobile app?

Android is an opensource platform that allows developers greater flexibility in app design and features than iOS.

They can play around with multiple options and customise the mobile app as they wish.

However, the freedom with app design is within the standard guidelines for apps published on the Play Store.

It means that any new Android apps need to pass the standard to be available to the users on the app store.

Apple has a closed ecosystem with strict guidelines that limit the developers’ freedom when designing and integrating features. iOS apps are only approved if they meet Apple’s standards.

How much time you have before your planned launch is also an essential factor that will influence your choice of platform.

The project timelines for both operating systems are different. Some of those key differences are:

The complexity, number of features, and functionality of the app will determine the project timeline of your mobile app development.

The Android OS is fragmented into multiple versions because many users are still using older versions, meaning developers need to ensure the app is compatible with all.

One way to counter the dilemma is for developers to limit the app to specific OS versions; that is making it compatible with a particular version of OS and above.

If you narrow it down to some operating systems versions, it would also decrease development time for the mobile apps.

With iOS, however, fragmentation is not an issue because Apple has a similar standard for all Apple hardware.

There are only two types of screens on which the iOS app is tested.

About 95% of iOS users download the latest OS update soon after release, whereas only 20% of Android users are interested in new OS versions.

However, the Play Store has fewer restrictions for Android Apps compared to the iOS App Store.

Apple App Store has a lengthy screening process, and iOS apps have a higher chance of being rejected than Android apps.

Monetisation – Which will profit first?

There are multiple ways to boost revenues with your mobile app on both iOS and Android platforms.

While iOS is more profitable in terms of monetary value, Android apps also bring in a substantial financial ROI and here’s how:

The monetisation models mentioned above can also be used on iOS apps to generate more profits.

In 2019, Apple earned 64% more than Google on average. The combined total made via mobile apps was $135 million.

Apple accounted for $84 million, while Google earned $51 million only.

Some reasons behind the revenue gap are:

Android vs IOS – what should it be?

Your choice of the operating system for your first mobile app depends on your business needs and goals.

The factors I’ve listed above are just some of the many that you should consider in your decision.

However, if you can’t decide what is best for your business, you have the options to build an app for both platforms one after another, but this can be very costly.

A hybrid app is built using a single code that works on both platforms.

They’re a budget-friendly solution for businesses that want to target Android and iOS users.

To make your decision easier, we suggest consulting with development agencies like Applify Labs.

A team of highly trained professionals will give you a thorough business analysis and insight into which platform is best for your business.